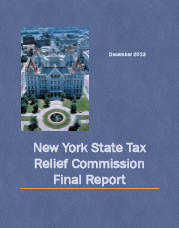 The Pataki-McCall tax commission report unveiled on Long Island today is a decidedly mixed bag. The commission’s recommended business and estate tax changes would represent solid steps to make New York more economically competitive. However, those changes are coupled with “property tax relief” proposals that would offer virtually no economic bang for the buck.

Starting with the highlights, commission recommendations beneficial to businesses include:

Additional tax breaks for manufacturers, including a targeted property tax credit and ultra-low corporate tax rate, were also proposed by the commission. This will win applause upstate, although it should be noted that special treatment for any particular industry sector violates the basic tax reform principle of uniformity.

As expected, and as clearly demanded by Governor Cuomo, the commission also recommended “property tax relief based on an individual homeowner’s ability to pay,” something that is best accomplished through some form of circuit-breaker credit on personal income tax.  No further details were suggested. As I argued here last week, a circuit-breaker is not really a tax reduction but a tax shift.

The strange new wrinkle in the commission report is a temporary, two-year “freeze” on property taxes. Here’s how described in the report:

This raises a whole lot of questions. Most New Yorkers pay property taxes to at least three jurisdictions — county, school district, and town or city.  Many also pay property taxes to special districts, and some people who live in villages pay yet another property tax.  How will these tax increases be divvied up for purposes of determining each homeowner’s rebate?  Will you get a tax rebate for your school tax hike if the school district fell under the effective tax cap, but not for a county tax or town increase over the cap?

And when they get around to filling out their income tax forms, how are homeowners to know whether they are eligible for any rebate?  What, specifically, will it mean for a particular jurisdiction to “abide by the 2 percent real property tax cap”? The basic 2014 “growth factor” is 1.63 to 1.7 percent for counties and municipalities, and recent inflation trends suggest the factor for school districts next year will be in the same neighborhood.  After taking into account allowances for newly constructed taxable properties, voter-approved school capital costs and payment in lieu of tax (PILOT) agreements, the effective cap will be a different number, slightly above 2 percent on average. Somehow, the state is going to have to inform every income tax filing homeowner of their allowable rebate based on local tax caps and adopted budgets.  This will be administratively cumbersome, to say the least.

And how is the state going to decide whether a county, municipality or school district has taken “meaningful concrete steps toward finding permanent structural savings by sharing services with other jurisdictions or consolidating governments in their entirety”?  As it happens, broad assumptions aside, there’s little empirical evidence that most localities or school districts can find any “permanent structural savings” through consolidation or shared services.  To the extent they might save money mergers or consolidations, localities generally will run into two potential brick walls:

The elephant in the room

The commission’s report devoted a single sentence to the personal income tax (PIT), which is the state government’s largest revenue source:

The top income tax rate is scheduled to reset back to 6.85 percent in 2018 and the Commission recommends this reset take place as scheduled in order to further strengthen New York’s economic climate.

But the rest of the report will make it much more difficult to accomplish this goal, by earmarking revenues that would otherwise be needed for it.

The background: As part of the 2013-14 budget, Cuomo and the Legislature agreed to temporarily extend, through calendar year 2017, a 29 percent tax hike on individuals earning more than $1 million and couples earning more than $2 million, which was previously due to expire at the end of 2014.  That tax hike will be generating $2.6 billion by fiscal 2017.  Roughly $700 million in rate cuts for the middle-class are also still temporary, as is a provision linking all the income tax brackets to inflation. In short, the PIT has more loose ends than a cheap sweater, but Cuomo prefers to treat it as a non-issue.

Enter former Governor George Pataki, author of the largest personal income tax cut in the state’s history, who reportedly was seeking a stronger recommendation to phase out the PIT hike. Here’s what Pataki had to say on the subject at today’s rollout of the commission report:

The governor [Cuomo] has appropriately said that in 2018 the temporary income tax surcharge on personal income will expire, and one of the important recommendations of this commission is that in 2018 that temporary higher personal income tax go away. I believe that that is one of, if not the single most important thing we can to get this state’s economy growing the way it should be growing.”

Except, in fact, Cuomo didn’t mention the PIT sunset at yesterday’s conference. Indeed, he’s never made a public commitment on the issue. If the state commits $1 billion to property tax subsidies, it will be that much less likely to afford the commission-recommended “re-set” of the top rate in 2018.