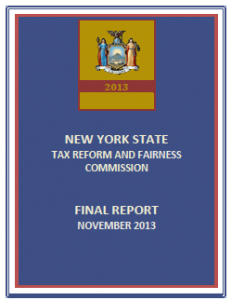 The report of Governor Cuomo’s Tax Reform and Fairness Commission is a useful, well researched collection of interesting and provocative ideas — some much better than others. Not a bad place to start a further exchange of ideas leading to a fruitful debate on the topic, assuming such a thing is possible in Albany. (One can always dream.)

For example, the report is very good on the subject of how to “modernize” (i.e., broaden) the sales tax base. But takes a wrong turn in recommending what ought to be done with the money raised by these changes.

The sales tax base-broadeners would include repeal of the tax exemption for purchases under $110. Adopted in the late 1990s as a priority of Assembly Speaker Sheldon Silver, the clothing exemption was virtually worthless as an economic matter, barely noticeable to individuals and families. Repealing it would raise a cool $800 million for the state alone, the commission says.  It also suggests applying the sales tax to more goods and services now exempted, including Broadway tickets and purchases of digital music online, which would raise a combined $446 million. Another $371 million would come from lifting the $2 per gallon cap on taxable gasoline sales.

These sales tax changes as a package would be defensible if the report also recommended that they be used to reduce the overall sales tax rate, or (in one category) other purposes directly linked to the more heavily taxed item.

For example, the lifting of the gas tax cap, plus another $47 million the report says can be raised by merging the petroleum business tax with the motor fuels tax, could be dedicated to the state’s currently over-leveraged and largely tapped out highway and bridge dedicated trust fund. Or, sticking strictly to revenue neutrality and excluding any redirection to spending programs, the $1.7 billion raised by all the sales tax base broadeners would make it possible to cut the combined state and local rate by a full percentage point, which would mean going to 7 percent from a current 8 percent in most of the state.  That may not sound like much, but over time it would add up for both individuals and businesses alike (especially non-manufacturing firms).  For example, a single percentage point reduction would reduce the average new car price by $312.

Unfortunately, the commission proposes that all the money generated by sales tax changes should be redirected away from the sales tax base in the form of income tax credits to provide “low- and middle-income tax relief” and, worst of all, property tax relief.

In fact, New York already offers exceptionally generous refundable credits to low-income taxpayers, most of whom get a net refund, while middle-income families pay a much lower average tax rate than more affluent filers. The idea of creating some new state-subsidized property tax relief credit, playing into Cuomo’s 2014 agenda, is especially bad one. State subsidies of local property taxes are invariably both inequitable and inefficient. Besides, New York already spends $3.5 billion on STAR, the nation’s largest state subsidized property tax abatement program.  This presumably would be in addition to that.  In a word, wasteful.

The commission also suggests reforming the Estate Tax by raising the taxable estate threshold to $3 million. That’s a good start, but doesn’t go far enough.  On the (very) negative side, the commission suggests this be financed by creating a gift tax, which would exchange one anti-competitive levy for another. New York is one of only 19 states that still impose their own estate taxes; a better idea would be to initiate a phase-out of the whole thing, period.

Finally, and somewhat unexpectedly, the report includes some solid recommendations for reforming real property tax administration (see below).  Some very interesting ideas there, worth further exploration.