New York’s employer-sponsored health insurance premiums – which were already among the steepest in the mainland United States – rose faster than the national average in 2018, pushing the state’s affordability gap to new heights.

The state’s average single-coverage premium in 2018 surged by almost 6 percent to $7,741 – second only to Alaska (see chart). The rate is 15 percent higher than the national average, New York’s widest gap since the federal survey began in 1996.

The average premium for family coverage grew 3 percent to $21,904. That also ranks second, behind New Jersey, and stands 12 percent higher than the national norm. 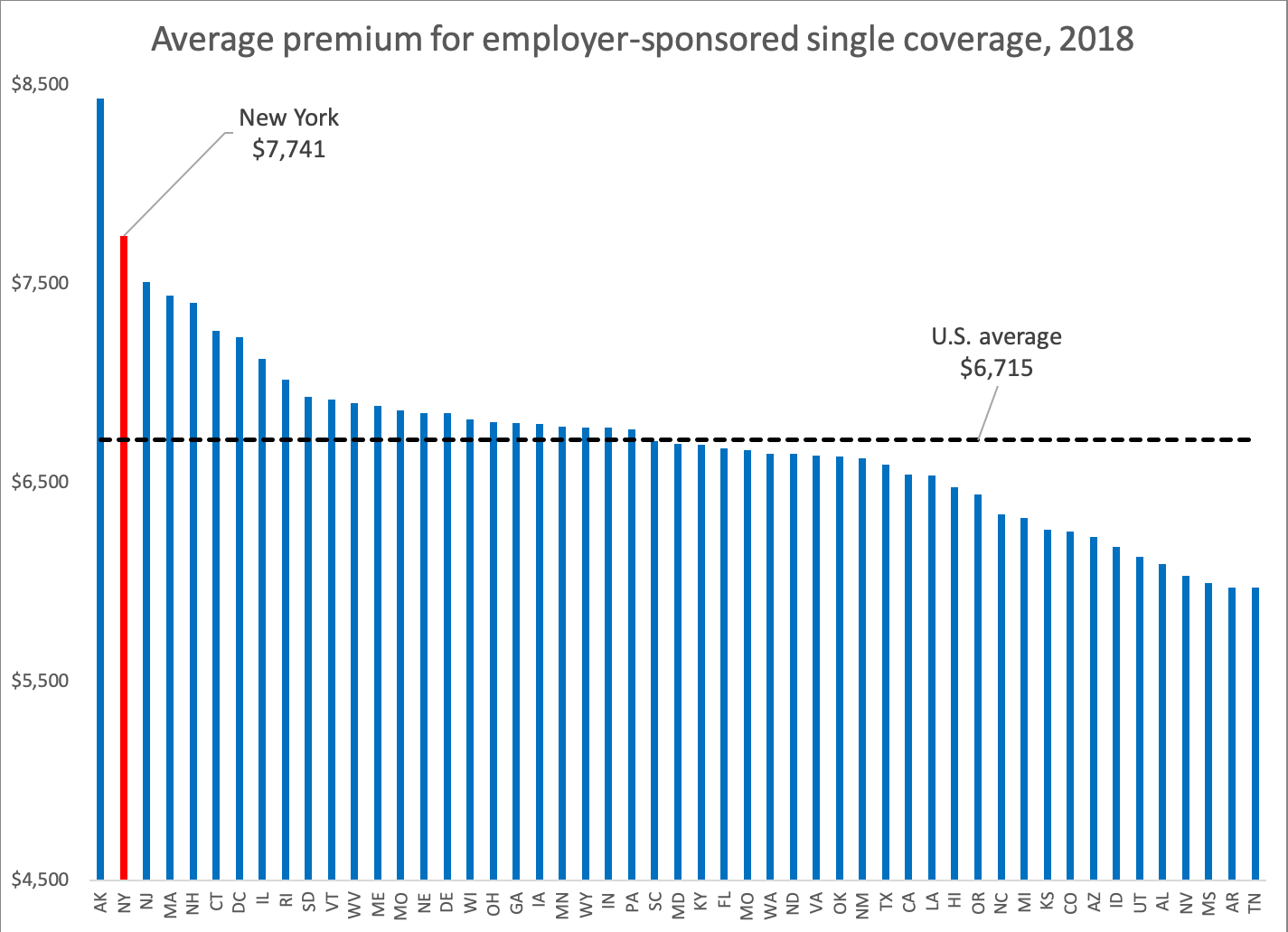 Source: Agency for Healthcare Research and Quality (click to enlarge)

The results, from a recently published federal survey, are the latest symptom of an unusual cost spiral in New York’s health-care system.

Earlier this month, a study from the New York State Health Foundation and the Health Care Cost Institute found that the state’s employer-sponsored insurance spending per person rose twice as fast as the national average from 2013 to 2017, outpacing every other state but North Dakota.

Meanwhile, Medicaid spending has been spiking so dramatically that the Cuomo administration resorted to postponing $1.7 billion in payments from the end of fiscal year 2019 to the beginning of fiscal 2020 to stay in technical compliance with a budget cap. If not for that gimmick, state expenditures would have exceeded budgeted amount by almost 8 percent.

Why are New York’s cost pressures especially severe? Contributing factors include the state’s generally high cost of living, especially downstate, along with rapid consolidation in the health-care industry and a high rate of unionization among health workers.

Far from acting to control health spending, Governor Cuomo and the Legislature keep doing things that will push it higher.

On Aug. 2, for example, Governor Cuomo signed a bill mandating insurers to cover annual mammography screenings for breast cancer starting at age 35 instead of 40, which is the existing policy. The U.S. Preventive Services Task Force does not recommend routine screening until age 50, and says it should be done every other year.

That was one of eight mandates passed by the Legislature this year, three of which have been signed by the governor so far. The most significant was a requirement that large-group plans cover in vitro fertilization, which by itself is projected to increase premiums by 1 percent, or more than $200 for a family of four.

When Medicaid spending first showed signs of running over budget last summer, the Cuomo administration refrained from developing a cost-control plan as the “global cap” law provides. Instead, the governor quietly approved a major rate increase for hospitals and nursing homes – a top priority of industry lobbying groups that were backing his reelection campaign. 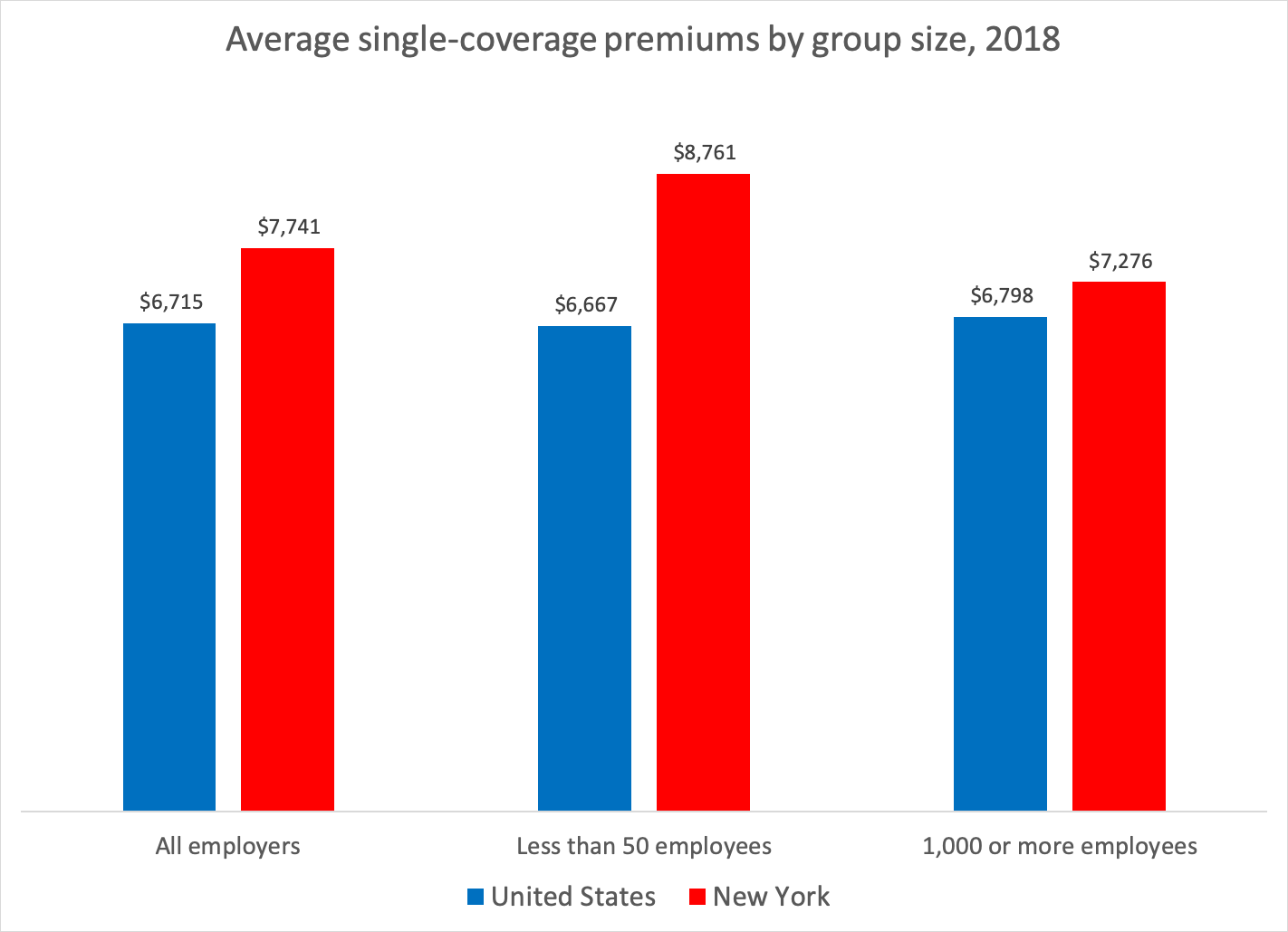 Source: Agency for Healthcare Research and Quality (click to enlarge)

More evidence of the harm done by state policy is found in the federal premium data.

Large employers – most of which escape the state’s heavy-handed regulations by becoming “self-insured” – paid average single-coverage premiums that ran 7 percent higher than the national norm in 2018 (see chart).

By contrast, employers with fewer than 50 workers – which are fully exposed to Albany’s policy regime – paid premiums that were 30 percent higher than the U.S. average.

It’s clear that excessive health costs are a growing burden on New Yorkers – and that decisions made in Albany are part of the problem. The question is whether state lawmakers will start trying to make things better rather than worse.

New York's employer-sponsored health insurance premiums – which were already among the steepest in the mainland United States – rose ...

New York businesses with fewer than 50 employees – which are fully exposed to Albany's policy regime – paid premiums that were 30% hi...

NY's average single-coverage premium of $7,741 is 15% higher than the national norm, the widest gap since the federal survey began in 199...

#MandateWatch A newly signed NY law requires insurers to cover annual mammograms starting at age 35, down from 40 in current law. The US ...