Washington’s newly enacted climate, health and tax package harbors an only-in-New York glitch: It pours even more money into the state’s Essential Plan, which is sitting on a multi-billion-dollar surplus that officials have been unable to spend.

Instead of being used to subsidize health coverage, that share of the state’s federal funding is likely to end up in limbo.

Among the major provisions of the federal legislation, which was signed by President Biden on Tuesday, is a three-year extension of enhanced health insurance subsidies under the Affordable Care Act.

In most of the country, those higher subsidies will flow entirely to consumers in the form of bigger tax credits to offset the cost of insurance premiums purchased through ACA exchanges.

In New York, however, a hefty share of the extra money will be diverted to the Essential Plan, a state-run insurance program for residents with incomes up to 200 percent of the poverty level.

The Essential Plan is a “basic health program,” an optional feature of the ACA that only New York and Minnesota chose to exercise. Its funding is formula driven: For each low-income enrollee, the state collects federal aid equivalent to the value of tax credits and other subsidies that person otherwise could have used to purchase private insurance.

In New York, this amount has averaged several thousand dollars per person – and has unexpectedly turned out to be more than the program needs to pay its bills.

As of June 2021 – after six years of operation – the Essential Plan had received $27 billion in federal funding and spent only $22 billion on claims, according to figures from the comptroller’s office. That left a surplus of $4.7 billion, or 17 percent of the money collected so far.

The excess is mostly due to the fact that the Essential Plan pays deeply discounted Medicaid-level fees to providers, allowing it to operate much less expensively than private insurance. Its enrollees also tend to be younger and healthier than average.

The chart below shows the approximate impact of the enhanced tax credits – recently extended through 2025 – for consumers of different incomes. (The exact amounts vary according to individual circumstances and local premium costs.)

As shown in the chart, the enhanced tax credits can be worth as much $1,000 or more per person in the Essential Plan-eligible category – meaning the program’s surplus is destined to mushroom further. 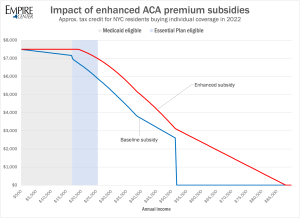 At the individual level, the biggest potential upside affects people above 400 percent of the poverty level, or about $51,500 for a single-person household. That group received no subsidies under the ACA as originally enacted. Under the enhanced program, they’re eligible for tax credits designed to keep their premium expenditures under 8.5 percent of income.

However, this involves a relatively small sliver of the population, because most people in that income group have employer-sponsored coverage and thus don’t qualify for ACA assistance. According to the most recent enrollment report from the New York State of Health, the state’s insurance exchange, 29,000 people above 400 percent of the poverty level stood to benefit from enhanced tax credits as of May.

Overall enrollment in subsidy-eligible insurance coverage, known as Qualified Health Plans, has been declining in New York, from about 273,000 in February 2020 to 226,000 this May.

State officials have been looking for ways to spend down the program’s surplus, but options are limited. Under federal law, money earmarked for a basic health program must be held in a segregated trust fund and spent only on medical benefits for eligible enrollees.

Resolving the glitch would seem to require action by Congress – but because the issue affects only one state, it has received little attention in Washington.

At one point, the Trump administration tried to trim the funding for basic health programs through executive action, but state officials sued to prevent the move – and eventually won a settlement that kept most of the money flowing.