A growing disconnect between two coronavirus benchmarks – the positivity rate and the infection rate – is stirring confusion about New York’s pandemic outlook.

The first rate is staying relatively low and stable, and that’s the one primarily featured by Governor Cuomo in his daily status reports.

The second rate has doubled over the past month to its highest level since May – a clear sign that New York’s pandemic is far from fully controlled.

The infection trend bears watching. Unless it changes, New Yorkers will face rising hospitalizations and deaths – and the possibility of retightened public health restrictions – as the holiday season approaches.

The infection rate, as used here, refers to the number of positive tests divided by the population. As of Sunday, the statewide rate had risen to 8.2 infections per 100,000, up from 4.1 late last month (see first chart). In August, it had dropped as low as 3.1. 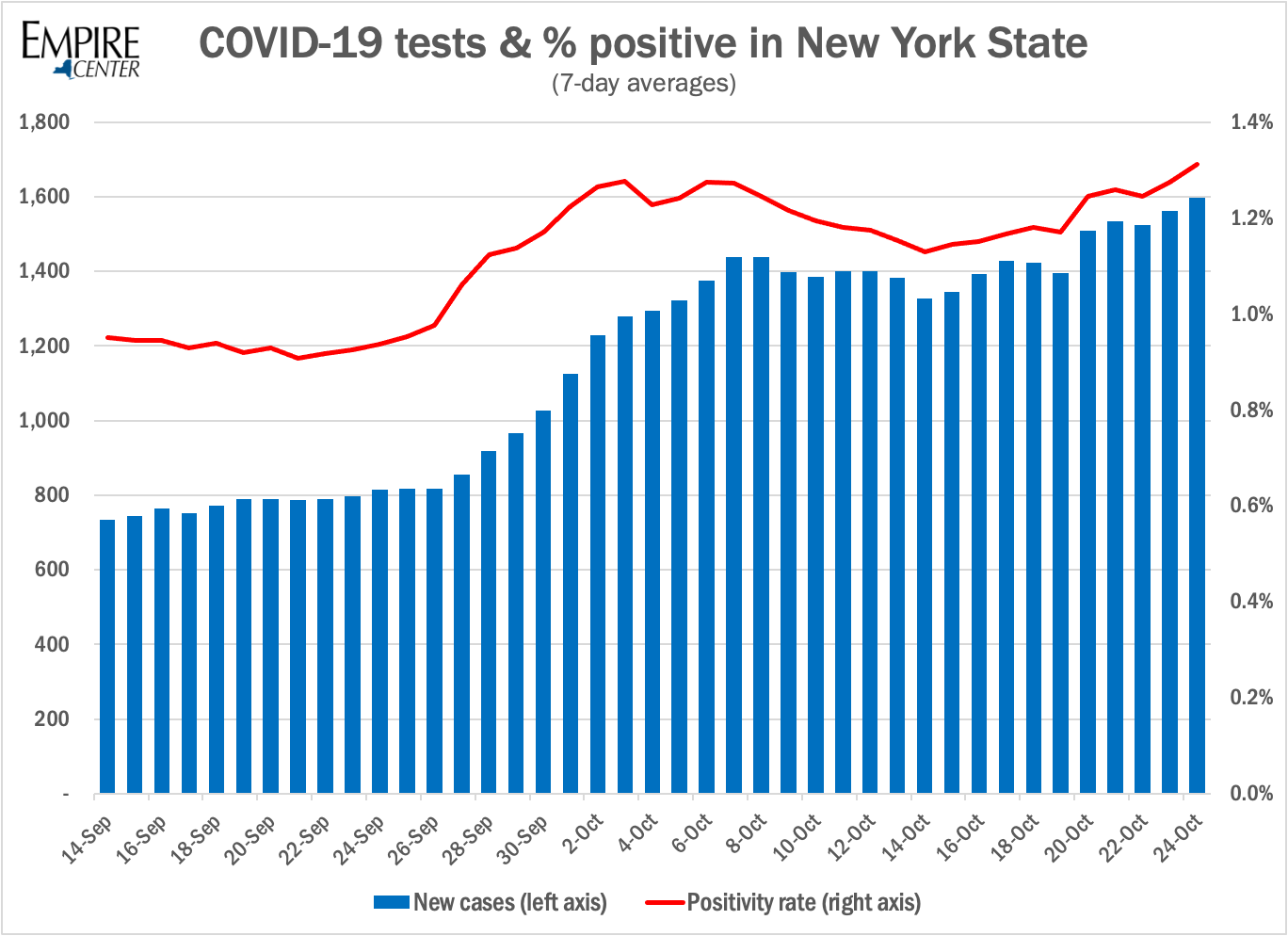 Although New York’s rate remains far lower than the national average of 21.3 per 100,000, it’s inching steadily closer to 10 per 100,000, which is one of the limits the Cuomo administration has used to impose travel restrictions on other states.

As of Sunday, two of the state’s 10 regions – Mid-Hudson and the Southern Tier – exceeded the 10 per 100,000 threshold, as did 17 individual counties (see second chart). (Update: A third region, Central New York, crossed the threshold on Monday.) The statewide one-day rate has surged above 10 twice in the past week (see third chart). 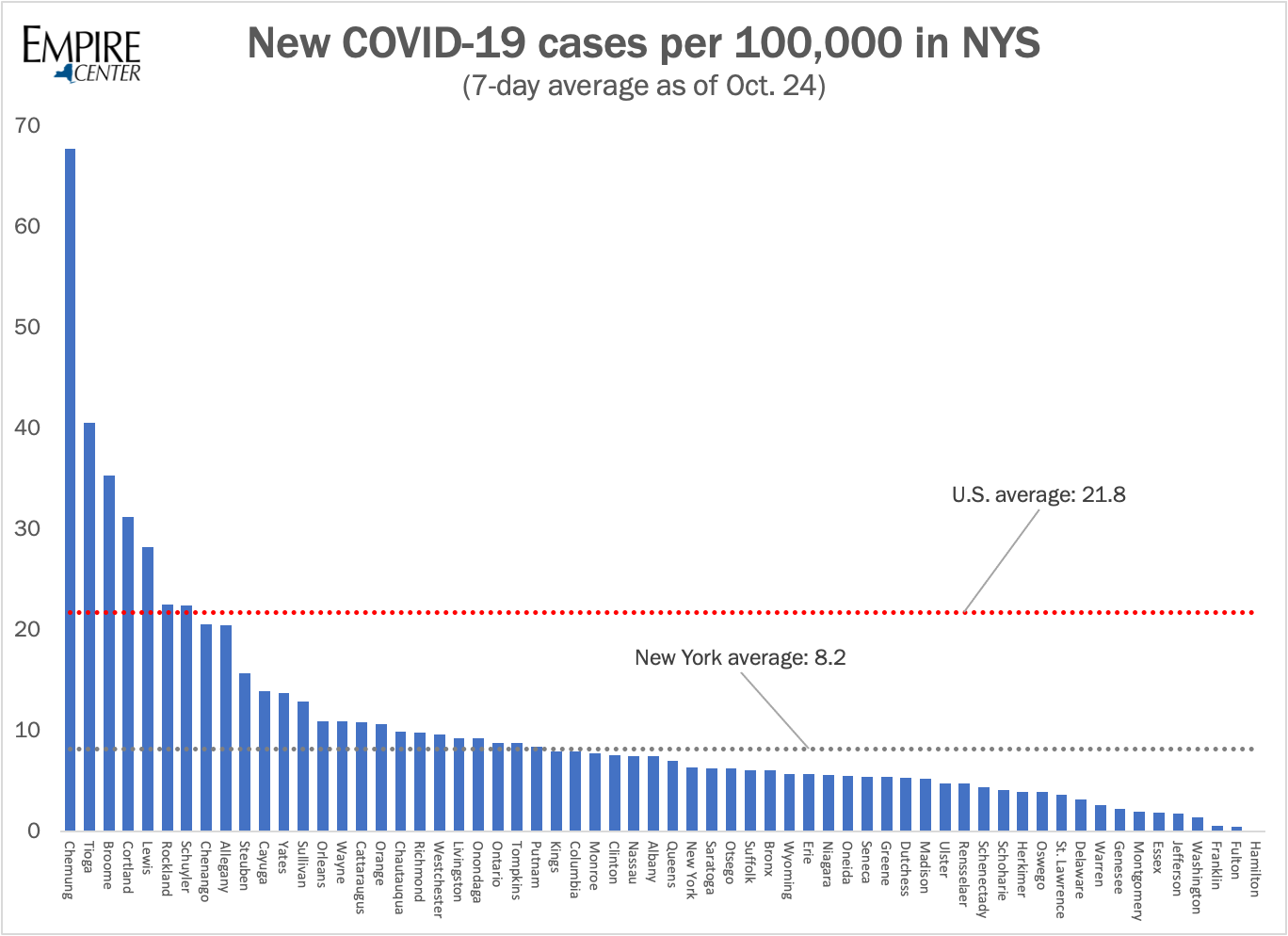 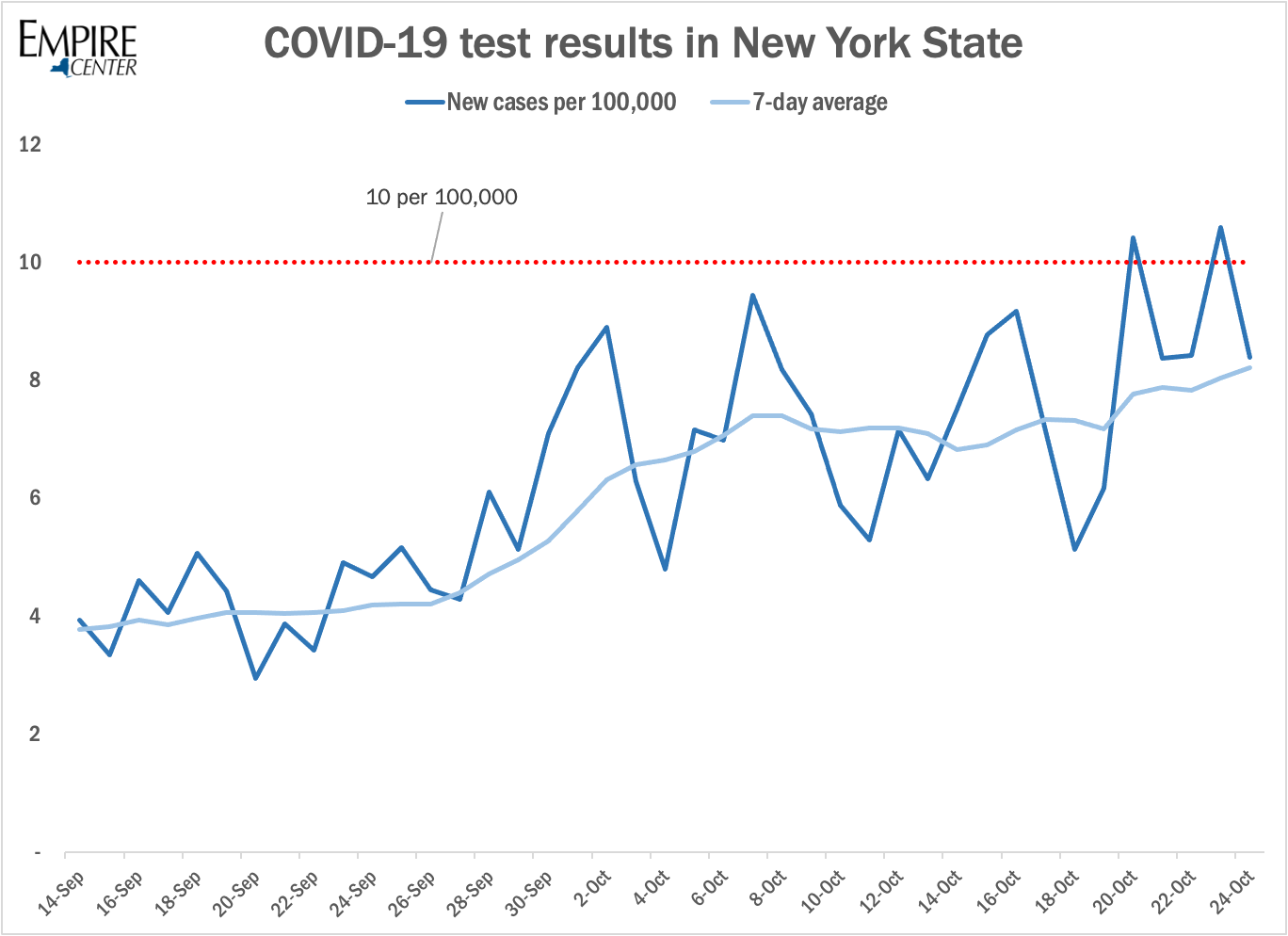 The positivity rate is the percentage of tests that come back positive (i.e., the number of positive tests divided by the total number of tests administered). New York’s positivity rate has stayed relatively stable between 1.1 percent and 1.4 percent over the past month, and remains among the lowest in the country.

The governor – who recently imposed tighter restrictions on designated “hot zones” around the state – cites positivity rates as evidence that his strategy is working.

“To give you an idea of the progress we’ve made with New York’s micro-clusters, the positivity rates in Brooklyn, Rockland and Orange Counties are all down this week,” Cuomo said at his briefing on Sunday. “That is great news. It says the focus works, and it says we can get the positivity under control.”

Based on infection rates, however, New York is still experiencing a wave of new cases that parallels the trend in the rest of the country – and it does not appear to be isolated to clusters.

The disconnect between the two measures appears to be driven by a significant increase in testing over the past month, much of it conducted by colleges and universities as part of their routine screening of students and staff. Most of that screening involves people who have no exposure or symptoms, so it generates a lot of negative results.

One result is that the positivity rates stay relatively flat even as infection rates and case counts climb (see third chart).

This effect is particularly clear in the Southern Tier, where the 1.3 percent positivity rate is in line with New York’s norm, but the infection rate has soared to 28 per 100,000, or more than triple the state average.

The Southern Tier has seen outbreaks linked to a prison in Elmira, a church in Horseheads, a nursing home in Corning and nightlife in Binghamton. At the same time, it’s home to several colleges and universities that are heavily testing their campus communities. Ithaca’s Cornell University alone is reporting 5,000 to 6,000 results per day – which is roughly half of all testing in Tompkins County – and all but a few are coming back negative.

Another concerning sign about New York’s autumn outbreak is hospitalizations, which have roughly doubled over the past month, to 0.7 per 100,000 per day, which is their highest level since mid-June.

Low positivity rates are a sign that New York is doing enough testing to keep good track of the pandemic’s progress. But it’s also important to pay attention to the results of that testing, and they say that New York’s pandemic is currently getting worse.