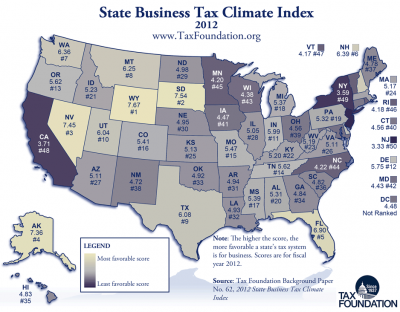 New York’s ranking in the Tax Foundation’s 2012 State Business Tax Climate Index is second to last, just ahead of New Jersey.  Our climate ranked 49th — second worst — in 2011, and we’re 49th again in the new index.  California was ranked just above New York at 48th.

The state’s business tax climate didn’t improve in Andrew Cuomo’s first year as governor, according to the Tax Foundation. To the contrary: while our overall ranking didn’t change, New York’s index “score” actually declined, thanks to the December 2011 income tax increase pushed through by Cuomo under the guise of “fairness” reform.

Another passage from the report should be required reading in Albany:

It is important to remember that even in our global economy, states’ stiffest and most direct competition often comes from other states.  The Department of Labor reports that most mass job relocations are from one U.S. state to another, rather than to an overseas location.

The business tax climate rankings call to mind the findings of our recent series of reports on migration.  The second in that series found that nearly 60 percent of New York’s out-migrants moved to southern states.  Florida is the new home of one-third of former New Yorkers.  Florida also ranked fifth in this index.  Coincidence? Unlikely.

But this isn’t the only economic or fiscal index on which New York ranks poorly.  Check out some more of our abysmal national rankings at the Empire Center’s Data Bank.