The possibility of increasing the city’s resident personal income tax was broached by Council Speaker Christine Quinn in her speech before the Citizens Budget Commission yesterday.

Today’s Times story on the subject includes some comparisons of the current New York City tax rate of 3.65 percent with the rates in some other cities that have local income or wage taxes (including Philadelphia, at 3.98 percent, and Cleveland, at 2 percent). But such comparisons don’t tell the whole story. The city income tax piggybacks on the state income tax, and one is not deductible from the other. Thus, the most accurate cross-jurisdictional comparison should take account of the combined state and local tax rate.

Including the state income tax of 6.85 percent, New York City residents are subject to a combined state and local personal income tax rate of 10.5 percent. That’s the highest in the nation, edging out the 10.3 percent statewide marginal rate in California (which has no local personal income tax, although San Francisco has a employer-based payroll tax of 1.5 percent). New York’s combined rate is also the highest in the region, as shown in the chart below. 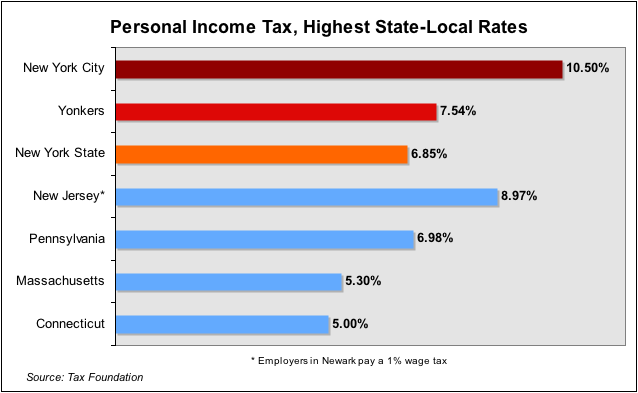 The city’s top rate kicks in at taxable incomes as low as $90,000 for married joint filers, compared to $500,000 in New Jersey. The Massachusetts and Pennsylvania rates are applied as a flat taxes on all incomes, after certain deductions and exemptions; Connecticut has a relatively flat two-rate structure, with the top rate kicking in at incomes as low as 10 percent.

One other important consideration: the New York City income tax (unlike the wage-based income taxes in some other cities) does not apply to non-residents, although out-of-state commuters are subject to the state income tax.  But contrary to popular conception (among politicians, at least), the city is not completely without a commuter tax.  Its unique 4 percent Unincorporated Business Tax (UBT) is applied at the firm level to profit distributions by professional partnerships (which are subject, after distribution, to the state income tax).  The UBT thus adds to the tax bills of many of the city’s most successfula and highly compensated lawyers, investors, financial advisers and physicians, among others–regardless of where they live.