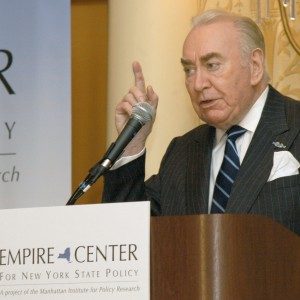 The governor who led New York State out of the fiscal crisis of the 1970s died Sunday at the age of 92.

At a September 2005 conference sponsored by the Empire Center, Carey denounced the proposed amendment as “a power grab and a purse grab” by the state Legislature.

Hearkening back to the tourism slogan popularized during his tenure, Carey declared: “”For God’s sake, if you love New York, don’t let Prop One become law.”

Voters listened. Despite a “yes” campaign bankrolled by labor unions and other beneficiaries of legislative spending, Proposal One was solidly defeated.

I discussed Carey’s life and legacy in this review of “The Man Who Saved New York,” just over a year ago.   A sample:

The governor had served in Congress with most of the men who would decide the fate of the city’s agenda, including President Gerald Ford, who would be demonized by the famous “Ford to City: Drop Dead” headline. But Ford’s Oct. 30, 1975, threat to veto a bailout also forced the state and city (and their creditors) to put more of their own skin in the game.

Ford and Congress agreed to approve seasonal loans for the city a month later, after Carey had won legislative approval for a controversial city debt restructuring and tax hikes. There was plenty of trouble ahead, but the control mechanisms Carey pushed through the Legislature during that crucial year also proved to be the foundation for recovery.

While managing the crisis, Carey could draw on memories of his father’s struggle to keep afloat a once-successful oil delivery business …

After leading troops into combat, Carey worked as a lawyer for another oil firm owned by his brother, before running for office for the first time at age 41. In sum, he was shaped by a combination of life experiences that made him well suited to tackle the problems New York faced in 1975. That, plus his innate intelligence and an ability not to take himself too seriously, made him the right man at the right time.

Carey was a proud Kennedy Democrat who embraced the liberalism his era. Yet from the start to finish of his two terms, he was also among the most fiscally responsible New York governors of any era. And although he temporarily raised state taxes early in his tenure, he also went on to initiate the largest personal income tax rate cut in New York’s history.