Governor Andrew Cuomo’s decision to ban high-volume hydraulic fracturing in New York State is a huge blow to the fragile and declining economy of the Southern Tier.

The eight-county region bordering Pennsylvania, including the Binghamton and Elmira metropolitan areas, sits squarely atop the natural gas-rich Marcellus Shale formation, which underlies much of upstate New York as well as Pennsylvania, Ohio and West Virginia. Earlier this month, the U.S. Energy Administration boosted by 50 percent its estimate of recoverable gas in the Marcellus Shale—beneath which lies the potentially even more lucrative Utica Shale.

As of 2010, the state’s own environmental impact statement projected that under an “average development scenario,” regulations clearing the way for high-volume hydraulic fracturing operations in upstate New York would result in the direct creation of 17,634 construction jobs and 7,161 production jobs, indirectly promoting creation of more than 29,000 jobs in other sectors. If Pennsylvania’s experience is any guide, the average fracking job in New York would pay about $62,000. A 2013 Manhattan Institute study found that, based on experiences in Pennsylvania, incomes could grow by 15 percent over four years in New York counties where fracking went forward.

If the state was allowing shale gas production to go forward, these earlier benefit projections would be suppressed, at least in the near term, by two factors. First, during the Cuomo administration’s long delay in reaching a final decision, dozens of communities have passed their own local tracking bans or moratoriums–although these ordinances are not necessarily permanent.  Second, the worldwide plunge in oil prices is expected to have a negative impact on gas production and investments in the short term (although residential gas prices in the northeast have been rising even as the price of heating oil plunges). 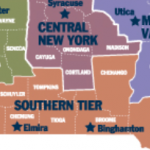 Still, given the likely economic ripple effects–which would have spread into the Rochester, Syracuse and Utica-Rome areas as well–shale gas production was by far the most promising potential growth engine for a vast swath of upstate New York.

Now what? Cuomo is promising to come up with alternatives, but if the record of the past four years is any guide, these will inevitably involve further state spending–both in the form of direct government “investments,” such as those in Buffalo, and in lost revenues from tax-free zones.

Meanwhile, the chart below summarizes private sector job growth by New York metro area, along with the U.S. average for the past four years. Binghamton and Elmira are the only two New York metro areas to have lost private sector employment during the period. The next two weakest regions have been Utica-Rome and Syracuse—which, based on Ohio’s experience, might also have expected job gains in various sectors from tracking in the Southern Tier.  (Buffalo-Niagara Falls, which Cuomo cites as a success story, has experienced mediocre private job growth of 3.7 percent.) 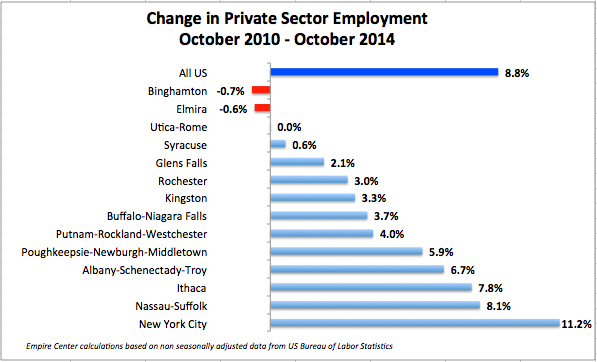 The impact of the state Health Department’s anti-fracking decision—based on “uncertainties” rather then firm scientific findings of actual negative health effects—won’t be limited to the landowners who may have collected royalties from gas production or the local residents who might have gained employment from the industry. Manufacturers in other industries also stood to benefit from the development of a nearby source of inexpensive natural gas.

This much is clear: the growth gap won’t be filled by casinos. The governor conceded as much in his public “cabinet meeting” today at which the fracking ban decision was announced, a few hours before a state casino siting board announced its decisions.