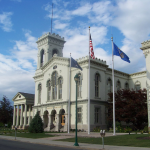 If Albany finances the takeover by diverting a share of sales tax revenue – as recently suggested by Lieutenant Governor Kathy Hochul – a quarter or more of counties would be net losers financially.

An amendment requiring the change, proposed by Reps. Chris Collins of Erie County and John Faso of Columbia County, was added to the House GOP’s American Health Care Act on Monday.

In a statement, Governor Cuomo framed the takeover not as a shift of costs from localities to the state, but as a cut to New York’s overall Medicaid program.

“Congressmen Collins and Faso are calling their amendment a ‘tax savings plan for the county,’ ” Cuomo said. “Really it’s a deathtrap, as there is no way to make up the shortfall.”

Medicaid is a government-operated health plan for the poor and disabled that currently covers about one in three New Yorkers. The federal government pays 51 percent of the costs, the state pays 35 percent, and the counties (including New York City) contribute 13 percent.

Formally sponsored by Collins, the takeover amendment was based on one of Faso’s proposals in the 2016 campaign. The amendment would take effect in two years and exclude the five counties that make up New York City, which has its own income tax.

County taxes represent a fraction of the total property tax burden that also includes revenue for schools, cities, towns, villages, and fire and other special districts. As a share of all property taxes combined, local Medicaid costs account on average for 7 percent – ranging from 2 percent in Hamilton to 17 percent in Chemung County. (See chart. The key data for all counties are summarized in a spreadsheet here.) 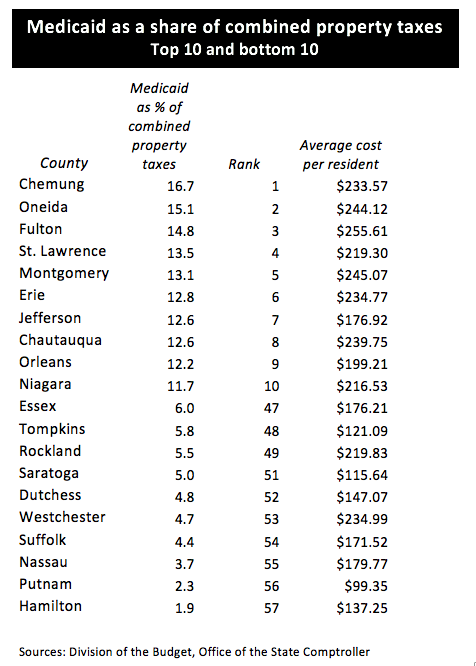 The full impact on taxpayers would depend on how Albany finances the takeover. One option would be for the state to divert a share of county sales tax revenue. The idea has been floated by some county leaders in the past, and Hochul raised it again in a statement criticizing Collins’ proposal: “If the Collins amendment passed, the state would need to raise income taxes or the counties would have to forgo their share of sales tax in exchange for the state picking up the additional Medicaid costs.”

The 57 counties’ collective Medicaid burden, $2.3 billion, equates to about 1.2 percent of taxable sales outside of New York City.

For most counties, a uniform reduction of sales tax revenue by 1.2 points would be less than the cost of Medicaid, making the swap an attractive deal. The biggest winners would be upstate counties with relatively large Medicaid populations and modest sales tax revenues, such as Oswego, Allegany, Sullivan, Orleans, and Fulton.

Also likely to be on the losing end would be several downstate counties, such as Nassau, Suffolk, and Putnam. For Westchester, the sales-tax-for-Medicaid swap would be roughly a wash.

Another factor to consider: Sales tax revenues generally grow in the long term, while counties’ Medicaid costs were frozen by Governor Cuomo and the Legislature in 2012. Over time, the value of lost sales tax revenue would outstrip the Medicaid savings for an ever-growing share of counties.

The House GOP’s health bill would partially repeal and place President Obama’s Affordable Care Act. Among other provisions, it would phase out extra federal funding that has been flowing to New York and other states as part of an expansion of the Medicaid. The Cuomo administration has estimated that the phase-out would cost the state $4.6 billion in aid over the next four years.