Much of the country has shaken off or is close to moving beyond the job losses that followed the instant pandemic recession nearly two years ago—but the pace of New York’s recovery continues to rank near the bottom among the 50 states, according to updated national employment statistics released today.

But even with that adjustment, as of January only Hawaii remained further below its February 2020 employment level.  As shown on the rollover map below, the only state to fall even within a percentage point of New York’s decline was tiny, atypical Vermont. All of New York’s other neighboring states were much further along on the road to recovery—with New Jersey in the strongest position, down just 2.2 percent from the pre-pandemic level.

Bringing up the rear

Nationwide as of January, private-sector employment was down 1.6 percent from February 2020 on a seasonally adjusted basis.  In 13 states, job count had risen above pre-pandemic levels—with the strongest gain recorded in Idaho, where employment was up 5.5 percent from the February 2020 level. Five states were within a single percentage point of a full jobs recovery, and four more were within two percentage points.

Among the Empire State’s most populous peers, employment in January was up 1.6 percent in Florida and 1.2 percent in Texas compared to February 2020. The job count in California was still below the pre-pandemic level, but by less than half as much (-2.5 percent) as in New York.

As shown below, New York’s decline has been especially severe in the construction sector, where it accounts for two-thirds of jobs lost nationally since before the pandemic, and in all other sectors except Information (including publishing and media), the only sector with a gain in New York exceeding the national trend, and Government, where New York’s net loss was somewhat less than the national trend. Note, also, that the Empire State had one of the nation’s worst job declines in three well-paying sectors: Financial Activities, Professional and Business Services, and Manufacturing. 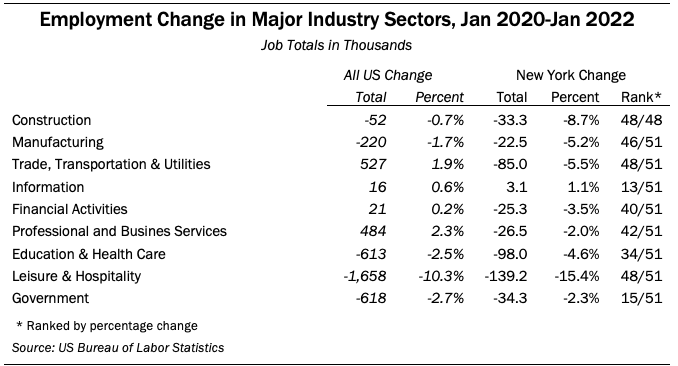