Updated labor statistics show that New York has been rising towards a full recovery from the pandemic crash somewhat faster than previously indicated—while continuing to fall well below the national trend.

On a seasonally adjusted basis, the Empire State’s total private employment in January stood at nearly 7.9 million jobs, according to today’s jobs report from the Labor Department. This was still 484,300 jobs below the February 2020 level—but also reflected a net gain of 1.4 million jobs since a near-vertical drop in April 2020, which followed the “pause” in normal business, economic and social activity ordered by then-Governor Cuomo on March 20, 2020.

As shown below, New York in January had recovered nearly 75 percent of the post-pandemic decline, while employment in the U.S. as a whole exceeded 90 percent of the February 2020 level. At January’s growth rate, however, New York still won’t fully recover until the end of 2023, while the nation is on track to hit the pre-pandemic level within this year.

In New York and other states, monthly payroll jobs data—i.e., by the employer’s place of business, not including the self-employed or farm laborers—are based on survey results from a statistical sampling of all employers.  As explained by the federal Bureau of Labor Statistics:

Jobs data are revised at the end of each year for all states and the nation as more complete information becomes available from employers’ Unemployment Insurance records. This process is called “benchmarking” and is federally mandated.

On a year-to-year, non-seasonally adjusted basis, New York’s private employment total in January was a healthy 6.4 percent over the January 2021 level, beating the national growth rate of 5.2 percent in the same period, as broken down regionally in the chart below from today’s Labor Department report. 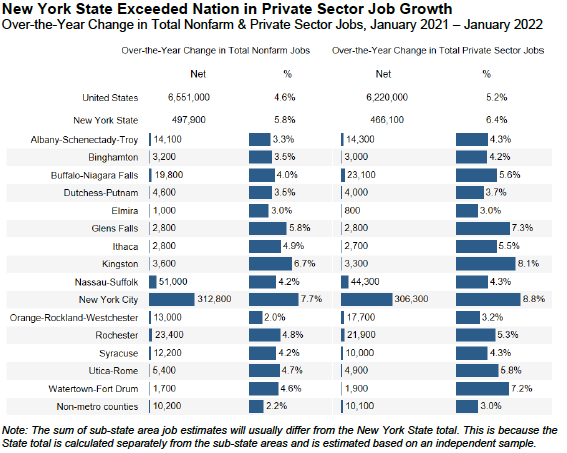 As shown above, nearly 80 percent of the 466,100 private jobs gained over the past year were downstate— in New York City, Long Island, and Westchester-Rockland-Putnam—where the initial impact of Cuomo’s spring 2020 pandemic shutdowns was most severe. Among the largest upstate metro areas, Buffalo-Niagara Falls and Rochester gained jobs slightly faster than the national rate, while Syracuse and Albany-Schenectady-Troy experienced private employment increases below the national rate. The fastest growing employment sector continued to be the biggest pandemic loser, Leisure and Hospitality, up 40 percent on the year.

Unemployment, the other major labor market indicator, changed little in New York, where the January rate of 5.3 percent was down an insignificant 0.1 percent from December —and still well above the national unemployment rate of 4 percent. The most positive development was an uptick in the labor force participation rate, as shown in Labor Department charts below; however, the total labor force was still down a whopping 540,000 people from the pre-pandemic level.  Only 33,000 more New York residents were available and looking for work in January than in the period immediately following the pandemic nearly two years early, reflecting widespread labor shortages that continue to hamper the overall recovery statewide. 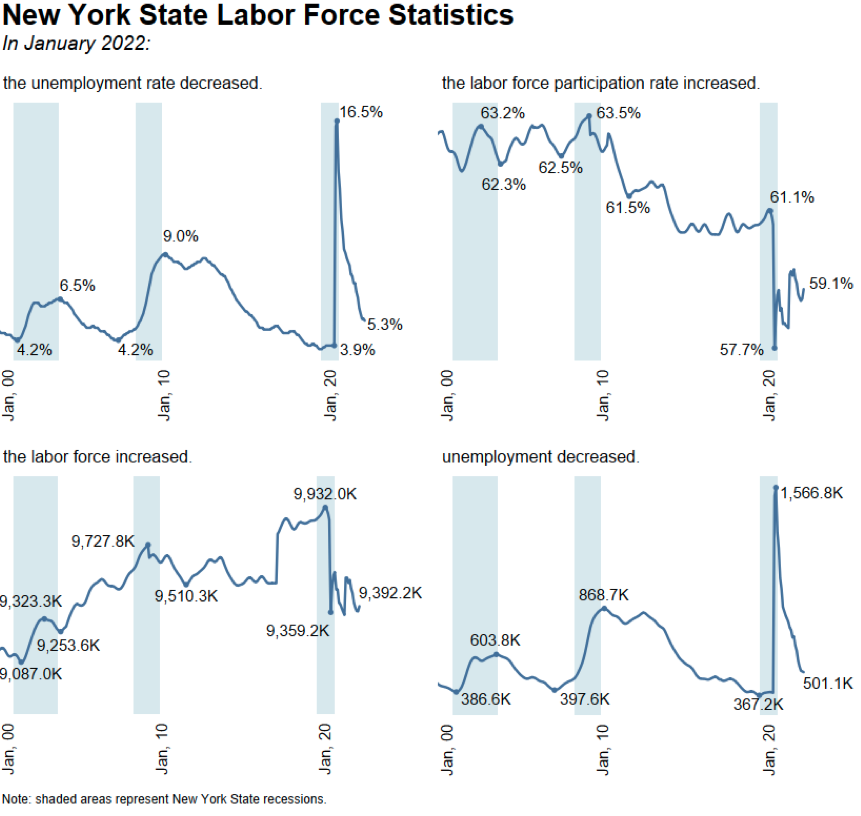 While there were positives in the state’s latest monthly jobs report, the future outlook for New York and the nation is clouded by sharply rising inflation and the as yet incalculable effects of the global economic disruption caused by the Ukraine war. Another wildcard is the state budget. Bucking a national trend, New York last year enacted significant tax increases on high earners and corporations, despite a massive infusion of federal Covid-19 relief and stimulus funding. Those tax hikes won’t be nearly offset by a one-shot “rebate” to homeowners and acceleration of already scheduled middle- and upper-middle-income tax cuts in Governor Hochul proposed budget.

With state operating funds spending already poised to grow by more than 8 percent, the Legislature’s Democratic supermajorities would like to drive spending much higher in the budget for the fiscal year that starts April 1. Yet, so far, neither Hochul nor the Legislature has made any move to earmark any share of the state’s federal relief aid to repay New York’s unemployment insurance advances from the federal treasury. As a result, as Empire Center’s Peter Warren recently noted, “Empire State employers are girding to pay a new surcharge averaging more than $200 per employee per year — a more than $1 billion annual tax on labor being imposed at a time when employers are struggling to restaff.”