New York State’s “Indigent Care Pool” doles out more than $1 billion a year in grants to hospitals, ostensibly to reimburse them for providing free care to the poor and uninsured. But most of the time, how much money a hospital receives bears no relation to how much charity care it delivers.

Safety-net institutions serving large numbers of poor and uninsured patients get pennies on the dollar for the free care they deliver. Meanwhile, some hospitals in more affluent communities, which treat few patients without insurance, collect grants far in excess of their unpaid bills.

The seemingly haphazard distribution of Indigent Care Pool grants derives from a formula that largely freezes payments to hospitals at their pre-2013 levels, regardless of changing need in the present.

An Empire Center report earlier this year spotlighted the dysfunction of the Indigent Care Pool based on grant data from 2015.1

This update explores the same records for 2016,2 and finds little sign of improvement.

Background on the Indigent Care Pool

Despite a decline in the uninsured population under the Affordable Care Act, approximately 5 percent of the state’s population, or about 1 million people, continue to lack health coverage.3

When the uninsured seek necessary care, hospitals are legally obliged – and, in many cases, mission-driven – to provide treatment regardless of a patient’s ability to pay.

The financial burden of charity care is not distributed evenly. Some hospitals see relatively few uninsured patients, and can easily offset the costs with revenue from insured patients and with charitable contributions. Others face much steeper losses, especially “safety net” institutions serving low-income neighborhoods and large numbers of undocumented immigrants, many of whom are ineligible for Medicaid or ACA-subsidized insurance.

Like many states and the federal government, New York has a long-established practice of partially reimbursing hospitals for charity-care expenses. Its current program, the Indigent Care Pool, was created as part of the Health Care Reform Act (HCRA) of 1996. 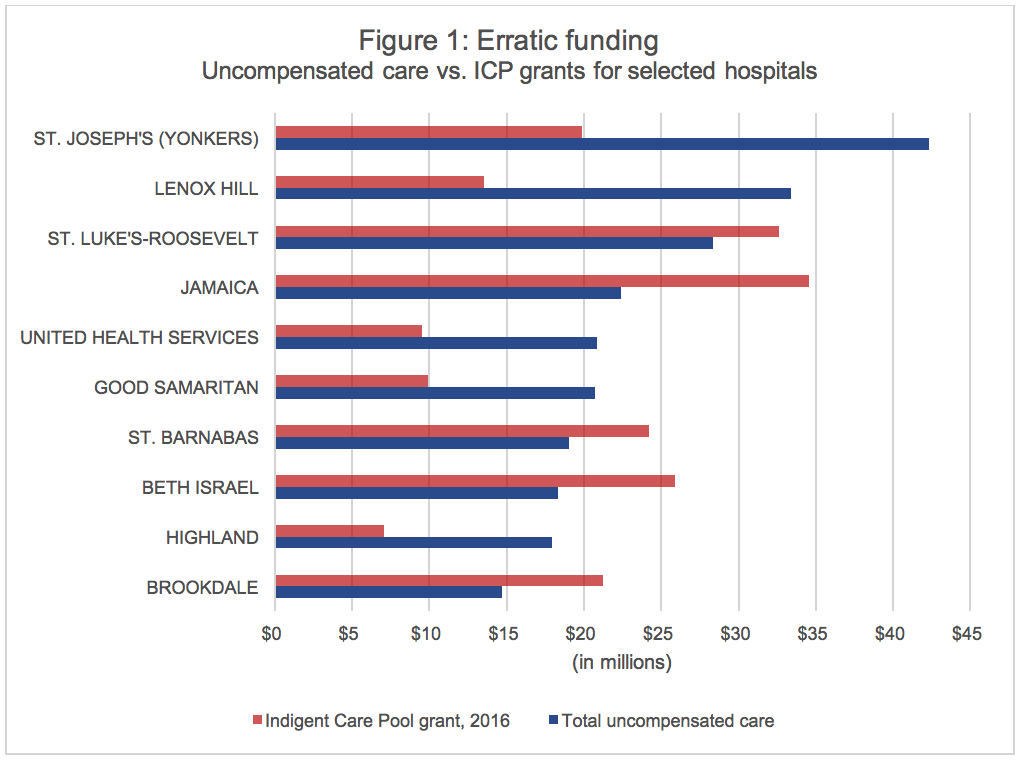 In 2016, the pool distributed a total of just more than $1.1 billion to 181 hospitals. In its earlier forms, the pool subsidized hospitals not just for charity care, but also for “bad debts” – bills left unpaid by patients who have insurance but fail to make good on their copayments and deductibles.

In 2013, Governor Andrew Cuomo’s Medicaid Redesign Team recommended removing bad debt from the distribution formula and basing grants strictly on care provided to indigent, uninsured patients. In adopting that change, however, Cuomo and the Legislature added a “transition adjustment” sharply limiting how much each hospital’s grant could increase or decrease in a given year. This adjustment effectively overrides the need-based calculation for the majority of hospitals, resulting in a disconnect between need and funding, as will be discussed further below.

The formula also allocates proportionally more pool funding to private, non-profit hospitals than to government-owned institutions, such as the 11 members of NYC Health + Hospitals, which provide an outsized share of free care to the poor in New York City. Government-owned facilities receive relatively less from the pool because they can draw indigent-care funding from other sources not available to private hospitals. For this reason, public hospitals are omitted from some parts of this analysis. 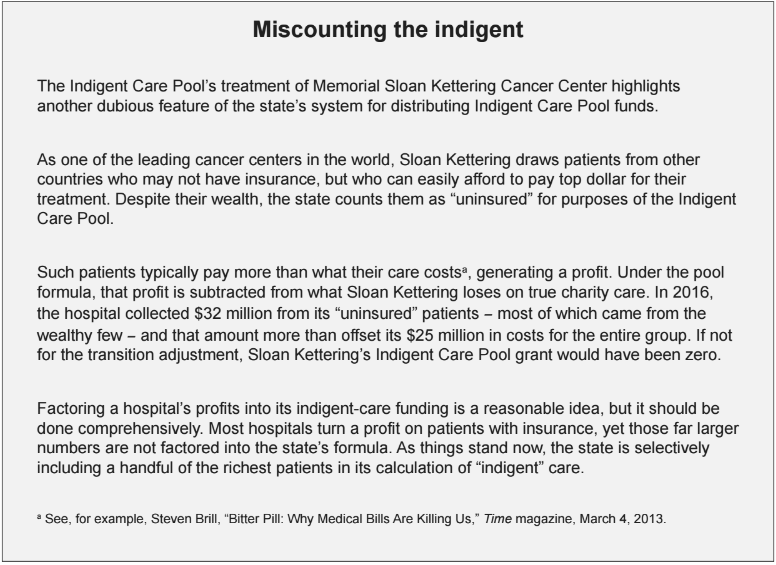 Using data supplied by the industry, the state Health Department calculated that private hospitals collectively provided $1.1 billion worth of free care to the indigent uninsured in 2016.5

The Indigent Care Pool was budgeted to distribute $995 million to private hospitals, meaning it could almost fully reimburse what they had provided in charity care.

Under the need-based formula recommended by the Medicaid Redesign Team in 2013, hospitals serving a higher concentration of Medicaid patients were meant to receive richer funding from the pool – as a way of directing more funds to institutions serving poorer populations. Had this system been strictly followed, the share of charity-care costs reimbursed by the pool would have ranged from 51 percent for a hospital that served no Medicaid patients during the year, up to 123 percent for a hospital where almost all patients were on Medicaid. But that need-based allocation was largely overridden by a “transition adjustment” that Cuomo and the Legislature tacked on to the formula during budget negotiations in 2013. Under that adjustment, a hospital’s grant for 2016 was guaranteed to be at least 90 percent of what it received, on average, between 2010 and 2012 – and could not exceed 130 percent of that amount.

Far from a minor change, this adjustment nullified the need-based part of the formula for the vast majority of hospitals. Of 180 facilities funded by the Indigent Care Pool, 37 lost money because of the transition adjustment, while 105 hospitals gained. Only 48 received an allotment directly tied to how much charity care they had actually provided. In effect, the state took money away from hospitals that needed it most, and transferred it to hospitals that needed it least.

The 37 hospitals on the losing end (which, on average, tended to serve more low-income patients) were collectively paid a total of $109 million less than their need-based allotments. That money, plus another $25 million added by the state, was used to overcompensate hospitals on the winning end (which tended to serve fewer low-income patients). In effect, the state was taking from the poor to give to the rich. The result is striking disparities between charity care provided and pool funding received (see Figure 1).

St. Joseph’s Hospital in Yonkers, for example, delivered $42 million worth of free care to the indigent and uninsured, almost three times as much as the $15 million in charity care provided by Brookdale Hospital in Brooklyn. Yet St. Joseph’s received just $20 million from the Indigent Care Pool, compared to $21 million for Brookdale.

Four hospitals received grants from the pool even though the net value of the uncompensated care they provided in 2016, as calculated by the state, was zero. The largest grant of the four was almost $12 million to Manhattan’s Memorial Sloan Kettering Cancer Center.

The impact of the transition adjustment is further illustrated by Figures 2 and 3. In both charts, each dot represents a hospital. The X-axis shows the poverty of the hospital’s service area (as measured by percentage of patients on Medicaid), increasing from left to right. The Y-axis shows the generosity of the hospital’s indigent-care grant (as a percentage of free care provided), increasing from bottom to top. 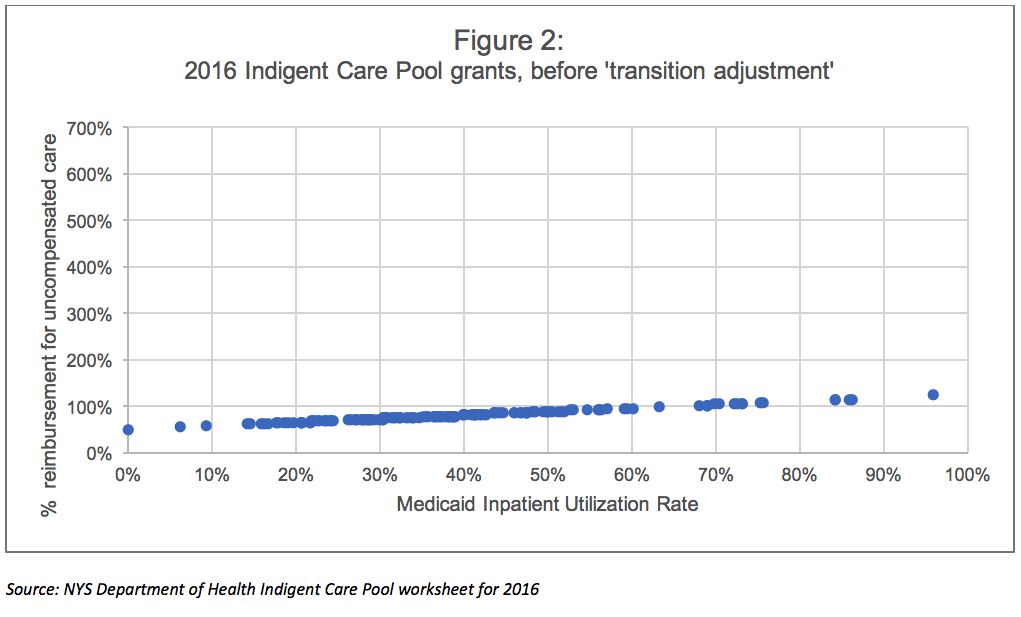 Figure 2 shows a hypothetical distribution according to the need-based calculation — that is, without the transition adjustment included. In that scenario, the richness of indigent care funding neatly and steadily increases along with poverty.

Figure 3 shows actual pool distributions, after the impact of the transition adjustment.

While an overall pattern is hard to discern, the downward-sloping trend line reveals a clear negative correlation between funding levels and poverty. This is the opposite of what would happen if, as in Figure 2, the need-based formula were applied without the transition adjustment. 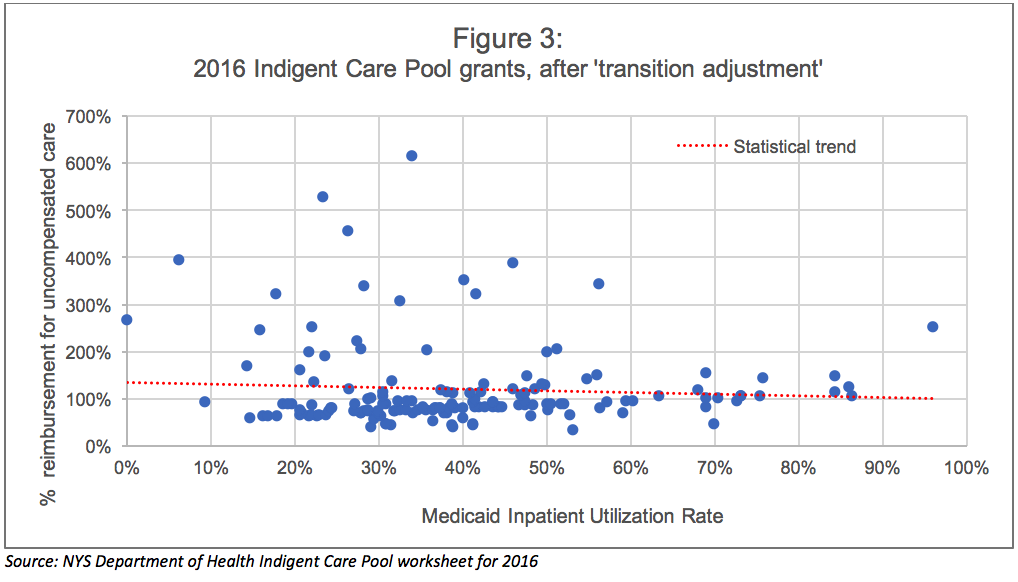 One possible rationale for a policy like the transition adjustment is to protect financially vulnerable hospitals from a sudden, steep loss of funding. As currently designed, however, the floor amount is tapering down by only 2.5 percentage points per year, and the ceiling tapers up by a similarly small amount. At that rate, the “transition” could continue through 2052.

Where indigent care money comes from Another problematic aspect of the Indigent Care Pool is its source of funding: the state’s unusually heavy taxes on health insurance.

The taxes originated with passage of the Health Care Reform Act of 1996, which replaced an elaborate system of price regulation for hospitals that included built-in subsidies for charity care and teaching hospitals. To continue those subsidies and finance other public health programs, HCRA levied two new taxes on health plans: a “patient services surcharge” on hospital, clinic, and laboratory bills; and a flat per-customer fee, or “covered lives assessment,” for each health plan enrollee, which varied by region based on the cost of physician education at local academic medical centers. Explicit HCRA subsidies for teaching hospitals ended in 2009, and the law has evolved in other ways. But the taxes have stayed in place – and tripled in size – as lawmakers repeatedly tapped the insurance industry to add programs and fill budget gaps. Today, HCRA’s insurance taxes generate $4.4 billion a year. Including its other taxes on cigarettes and hospitals, HCRA is due to raise $5.8 billion in the current fiscal year, making it the state’s third-largest source of revenue.6

The taxes counterproductively drive up the cost of coverage; regressively hit lower-income insurance customers just as hard as the wealthy; and, in the case of the covered lives assessment, unfairly vary from place to place, with, for example, New York City residents paying at a rate about twenty times higher than the rate for Utica.

For the most part, meanwhile, the revenue is no longer used for HCRA’s original, narrowly defined goals. Instead, two-thirds of the money flows into the state’s Medicaid program,7 which was traditionally financed with general revenues. Much of the other third is spent on programs, such as the Indigent Care Pool, that are either mismanaged or unnecessary.

Another insidious feature of HCRA’s insurance taxes is that they are almost entirely hidden from public view—making it politically easier for legislators to raise them. To shed more light on the who pays how much in HCRA taxes, the Empire Center obtained the collection records for fiscal year 2016.8

The biggest payers, unsurprisingly, were insurance companies, who accounted for 70 percent of the revenues documented in the records. Another 13 percent came from taxpayers (on behalf of government programs and public employee benefit plans), 11 percent from large companies with “self-insured” health benefits, and 7 percent from labor unions that operate benefit funds.

The second-largest payer was the state Medicaid program, at $451 million. (A state program paying state taxes is not as nonsensical as it might appear, because more than half the money for Medicaid comes from federal aid. In effect, the state is paying itself $225 million to draw a matching amount from Washington.)

The state is also the fourth-largest payer, contributing $218 million on behalf of the health plan it operates for hundreds of thousands of government workers and retirees. In all, 628 entities paid at least some amount of HCRA insurance taxes in 2016. Table 1 shows the top 25. 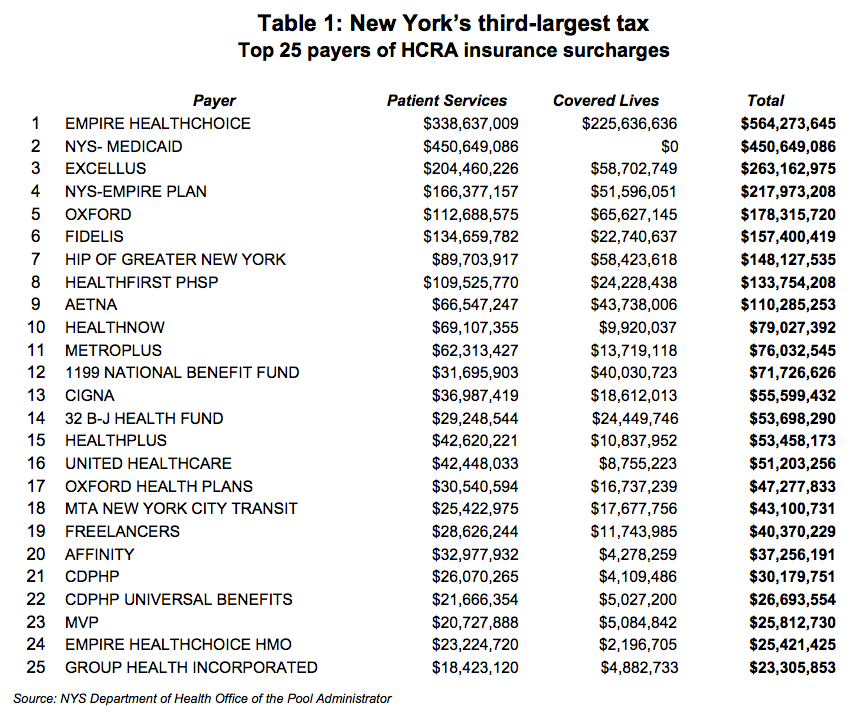 Twice in the past two years, the Assembly and Senate voted overwhelmingly to establish a new financial aid program for fiscally stressed safety-net hospitals – leaving the dollar amount to be determined later. Last year’s bill was vetoed by the governor, and this year’s had not been delivered to his office as of this writing.

Earlier this year, meanwhile, the Legislature extended the Health Care Reform Act for three years, through 2020, with scarcely any debate and without the slightest reform to an Indigent Care Pool that misspends $1.1 billion a year. Nor did lawmakers even consider easing HCRA’s heavy taxes on health insurance – which make coverage harder to afford, and thereby aggravate the social ill that the Indigent Care Pool is nominally meant to solve.

Rather than creating yet another spending program to help safety-net hospitals, Albany should fix the one it already has.