A decade of climbing enrollment and shifting policy has led to a profound but little-discussed change in the demographics of New York Medicaid: The government-financed health plan, which has traditionally focused on the indigent and disabled, now appears to cover more people above the poverty line than below it.

This new pattern, reflected in data from the Census Bureau, is derived from the combined effect of two trends over the past 10 years: Even as the state’s poverty rate dropped in an improving economy, its Medicaid rolls grew to a new high of more than 6 million.

As a result, people with incomes above the federal poverty threshold accounted for all of the net enrollment increase. As of 2019, this less needy group had become the majority of Medicaid recipients, a situation seen in few other states.

This trend likely continued during the coronavirus pandemic, when the number of New Yorkers on Medicaid surged to 7.2 million, or more than one-third of the state’s population.

As a threshold matter, these figures raise concern that the state is not adequately screening Medicaid applicants, as has been found in state and federal audits.

Beyond that, the use of a safety-net program to cover such a broad swath of the population – including many who are not disabled or unemployed – has a range of negative consequences.

Burgeoning Medicaid expenses leave less money available for other government programs and add to the burden on taxpayers. Because Medicaid pays substandard fees, its growth distorts the finances of the health-care system. Because it is partly financed with taxes on private insurance, it directly drives up premiums for consumers and employers.

Most critically, the expanding population of less needy Medicaid enrollees diverts attention and resources from the more vulnerable recipients who should be the state’s top priority – such as indigent nursing home residents and people with severe mental and physical disabilities.

In a better-balanced health care system, fewer New Yorkers above the poverty line would need Medicaid. With help from an employer or, as necessary, government subsidies, more working people would be able to obtain good-quality private insurance that pays claims at market rates.

The state could move in this direction by making private coverage more affordable and accessible while also tightening Medicaid enrollment practices.

Strategies for fostering private coverage would include reducing the state’s heavy taxes on insurance, rolling back regulations and mandates that drive up premiums, incentivizing more employers to offer health benefits and, perhaps, supplementing the federal insurance subsidies offered through the Affordable Care Act.

With Medicaid enrollment and costs under better control, the state could reinvest its savings to lift Medicaid fees closer to the industry standard – which would improve care for the program’s neediest recipients.

Medicaid was established in 1965 as a health insurance plan for the poor and disabled, with the federal government paying half or more of the cost. Eligibility standards and benefits can vary by state, and New York’s version of the program has been among the broadest and most generous in the country.

It currently spends more per capita than any other state, with a budget for fiscal year 2022 of $82.5 billion.[1] That includes $47.4 billion in federal aid, $27.2 billion in state funds and local payments totaling $8.0 billion from New York City and the 57 other counties.[2]

President Obama’s Affordable Care Act (ACA), which took full effect in 2014, encouraged states to expand Medicaid eligibility to 138 percent of the poverty level with the federal government paying most of the additional cost. New York was one of 38 states to participate in the expansion. However, the state’s pre-existing eligibility rules met or exceeded the ACA standard for most enrollees.

For uninsured people with higher incomes – from 138 percent to 400 percent of the poverty level – the ACA offered tax credits on a sliding scale that were designed to keep the net cost of coverage under 10 percent of family income.

As an option, the ACA allowed states to establish a Medicaid-like “basic health program” for residents up to 200 percent of the poverty level, with federal aid covering most of the cost. New York and Minnesota were the only two states to exercise that option, and New York’s version is known as the Essential Plan.

WHAT THE DATA SHOW

The state Health Department, which manages New York’s Medicaid program, does not publish income statistics for its enrollees, nor is that information readily available from other sources.

However, Census Bureau’s Small Area Health Insurance Estimates program provides a state-by-state breakdown of how many non-elderly people were insured and uninsured in various income categories based on ACA eligibility rules. This makes it possible to indirectly estimate the income profile of enrollees.

As shown in the table, the insured rate for non-elderly New Yorkers under 138 percent of poverty level – the standard cutoff for Medicaid eligibility – rose steadily in the past decade, from 79 percent in 2010 to 91 percent in 2019.[3]

However, the number of insured people in that category has been dropping along with size of the overall group, a byproduct of the state’s declining poverty rate in a growing economy.

Meanwhile, Medicaid enrollment as reported by the Health Department rose sharply through the first half of the decade – including a 10 percent spike when the ACA took effect in 2014. The rolls leveled off for several years, then surged again after the pandemic struck.[4]

These countervailing trends left a growing gap between the ranks of insured people living below the poverty line and Medicaid’s total enrollment.

As of 2019 (the most recent year for which the census data are available), there were 2.7 million insured non-elderly people under 138 percent of the poverty level, compared to 6.1 million Medicaid enrollees, about 5.4 million of which would be under 65. That suggests that 2.7 million non-elderly enrollees, or about half, had incomes above 138 percent of the poverty level. The amount living above the poverty threshold itself would be more than half.

This analysis requires some caveats. First, the census figures are estimates and therefore could be too high or too low.

Still, the estimated share of New York enrollees living above the standard eligibility threshold in 2019 was higher than all but three other states: Alaska, Connecticut and Massachusetts.[5]

Some portion of New York’s higher-income enrollment is likely to be improper. In 2018, federal auditors checked the records for 130 recipients, and found that the state had incorrectly determined the eligibility for 37 of them, including eight whose income exceeded 138 percent of the poverty level.[6] A state audit that same year found that the program had mistakenly paid more than $1 billion in managed care premiums over a six-year period on behalf of enrollees who had other forms of comprehensive health insurance.[7] 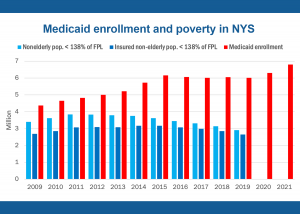 THE CONSEQUENCES OF OVERUSING MEDICAID

For people with disabilities and other medical needs who are unable to support themselves financially, Medicaid is a critical lifeline. Providing decent care for New Yorkers living in abject poverty and those with serious mental and physical disabilities is one of the state’s highest responsibilities.

Instead of focusing on that core duty, however, the state has increasingly used Medicaid as a catchall plan for people who fall through the cracks of the health-care system – including many who are able-bodied and/or employed. This has a range of negative consequences for the state.

Straining taxpayers: Due in part to rising enrollment, Medicaid consumes an ever-larger portion of the state’s available money. The state share of the program for fiscal year 2022, at $27.2 billion, has become the second-largest line item in the state budget, just behind school aid at $28.3 billion.[8] 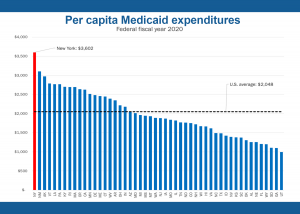 All other parts of the state budget – transportation, environmental protection, parks, etc. – take a back seat. From 2017 to 2020, the average annual growth of state spending was 4.6 percent for Medicaid, 4.0 percent for school aid and minus 0.3 percent for everything else.[9]

The crowding-out effect is evident within the Health Department itself, where non-Medicaid programs – such as monitoring infectious diseases and inspecting nursing homes – have lost money and personnel even as the Medicaid budget mushroomed.

When the pandemic arrived, the department’s Wadsworth Laboratories – which played a key role in COVID-19 testing – was operating with half the budget and one-third of the staff that it had commanded 10 years before.[10]

The more Medicaid recipients a hospital or doctor treats, the less revenue they tend to collect – which inevitably affects the quality of care among safety-net providers. The byproduct is a two-tiered health-care system of haves and have-nots.

Straining insurance consumers: To help raise cash for Medicaid, the state imposes a pair of unusually heavy tax surcharges on insurance that generate $5 billion a year – making them Albany’s third-largest source of revenue after income and sales taxes.[12]

Those surcharges, along with a long list of coverage mandates and other regulations, are one reason New York businesses and their employees pay the second-highest health premiums in the United States.[13]

Neglecting the neediest: The growing ranks of less-needy Medicaid recipients compete for limited resources with some of New York’s most vulnerable people, including frail, elderly residents of nursing homes and people with severe mental and physical disabilities.

The providers who serve these populations, such as nursing homes and group homes, depend on Medicaid as their predominant source of revenue. Yet when they appeal to the state for additional money, their needs are often overshadowed by the lobbying clout of other players in the health-care industry.

In 2018, for example, former Governor Andrew Cuomo ordered a Medicaid rate hike of 2 percent for hospitals – a group of which had recently donated more than $1 million to the Democratic Party – but 1.5 percent for nursing homes and no hike for other providers.[14]

The Affordable Care Act provided for a two-pronged approach to reducing the nation’s uninsured population – offering Medicaid under 138 percent of the poverty level, and subsidized commercial insurance above that threshold.

As the law was implemented in New York, however, the taxpayer-financed half of that strategy has overwhelmed the commercial side.

The 1.4 million increase in Medicaid enrollment from 2010 to 2019 more than accounts for the 1.2 million estimated drop in the state’s uninsured population during that period.[15]

During the pandemic, the three programs’ combined enrollment surged further to 8.4 million or 42 percent of the population. However, much of that increase should be temporary. As a condition of receiving relief aid, states were required to suspend their usual procedures for rechecking the eligibility of existing Medicaid recipients – effectively keeping people on the rolls regardless of their current income. Enrollment is expected to decline when that policy expires.

To reverse its overdependence on Medicaid – or at least stem the program’s future growth – the state should recommit to the public-private balance that the ACA originally envisioned. People above the poverty line should be encouraged to obtain commercial insurance, with government help where necessary. Taxpayer-financed coverage should be reserved for those with no means to support themselves.

Steps to make this happen would include:

Medicaid was never meant to be a mainstream health plan that covers a third or more of the population, and using it that way is a disservice to the vulnerable people it was intended to serve and the broader health-care system.

Moving more New Yorkers into commercial coverage would both reduce the burden on taxpayers and improve reimbursement for health-care providers. It would also free up money that could be used to increase Medicaid fees – and improve care for the vulnerable residents who most need the state’s help.

[8] Author’s analysis of financial plans from the New York State Division of the Budget.