It’s not required if you do what homeowners typically do when they undertake an extensive home renovation project. They don’t want shoddy, unprofessional work, but they also don’t want to pay above the going rate. So, they look at multiple bids and accept the lowest one that will produce a good result.

If the stadium deal were handled the same way, its price tag would be an estimated 20 percent lower. No individual homeowner would willingly pay a 20 percent premium, so why is the governor proposing to do so with public revenues raised from taxpayers?

Section 220 of the state labor law guarantees a “prevailing wage” on publicly funded construction projects in locales where 30 percent of tradesmen are unionized. The term is an oxymoron because the pay rates are not prevailing ones and don’t primarily impact wages. As applied, “prevailing wage” means union-level wages, benefits and workplace rules. The regime is also applied statewide, even though, according to 2021 Bureau of Labor Statistics data published on unionstats.com, the private construction industry in New York is only 30 percent unionized (meaning many locales must be below the 30 percent threshold).

A cost assessment of the state’s prevailing wage mandate performed by the Empire Center in 2017 estimates that labor costs under prevailing wage in Buffalo are 84 percent above the local market rate, which translates into a 20 percent markup in the total cost of a typical public construction project (see chart from study below). The study found the markup on benefits is much higher than on wages, with a big chunk of the subsidy passing right through workers’ paychecks and into underfunded union pension funds, which get backfilled via the scheme. 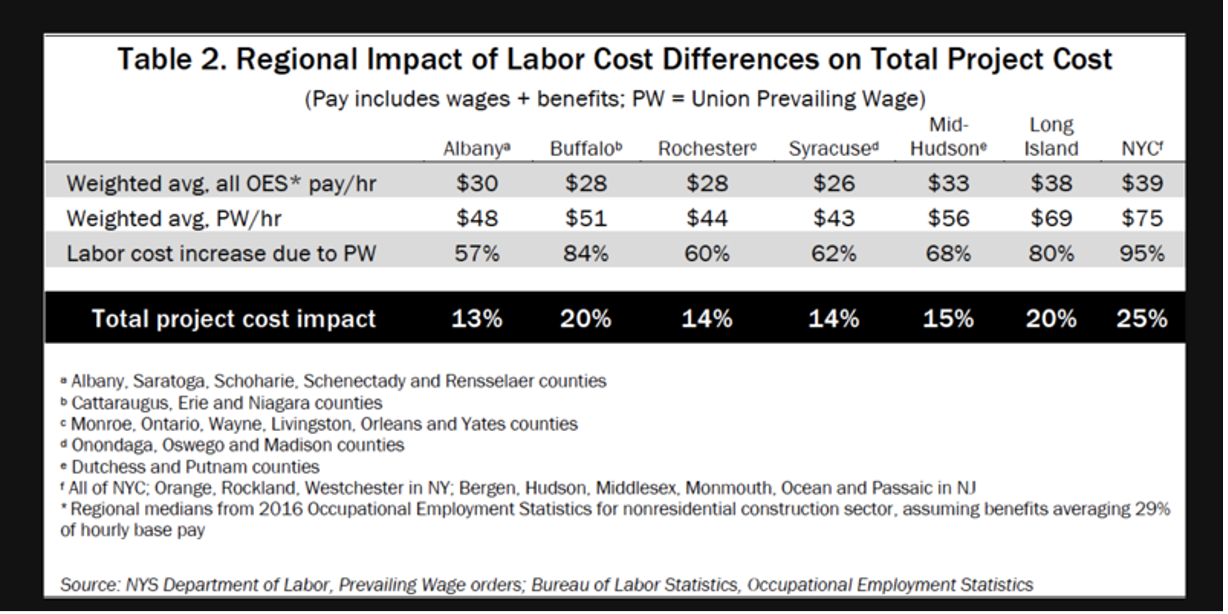 Last year, when the Buffalo News interviewed a “source familiar with the negotiations” about the incipient stadium deal, the source told them that the $1.4 billion estimated price tag was due to the high cost of building in New York, “citing prevailing wage and union workforce requirements, among other rules.”

Regarding the actual deal announced by the Governor this week, the chart below illustrates how the prevailing wage requirement jacks up the cost share of each party — including that of taxpayers in Erie County and the state writ large.

What the Governor’s press release advertises as the “Largest Construction Project in Western New York History” would clearly be a huge boon to the area’s construction industry if the work was paid for at market rates. So, if the Governor was pursuing a stadium project that would “get the best deal for taxpayers”—as she claims in the press release — she would have proposed waiving the prevailing wage requirements to limit the subsidy to that necessary to build the stadium.

Instead, the stadium deal doubles-down on the prevailing wage law by stipulating use of a project labor agreement (PLA) with the politically powerful Building and Construction Trades Council. The PLA stifles competition further by requiring not only union-level compensation but also unionized labor. That means most construction workers in the area (the non-unionized majority) are left hung out to dry.

Any kind of stadium subsidy deal would be quite a pill for residents to swallow. Economists broadly agree that publicly subsidized stadiums are a bad deal for taxpayers. The Governor’s office should show its math regarding the purported $385 million broad annual economic impact on the region that is lost if the team leaves (which works out to more than $600 for each game ticket sold).

New Yorkers are rightly skeptical of their taxpayer dollars subsidizing private projects. They should be hopping mad to get a bill padded with a 20 percent surcharge to pay for a sweetheart union deal.