The COVID-19 pandemic was an unprecedented catastrophe for New York’s economy, destroying nearly two million private jobs virtually overnight in the spring of 2020. Over the past three years, the Empire State’s recovery has been steady but slow, moving payrolls back to within three percentage points of the 2019 pre-pandemic level as of July, which is the latest month for which comparable (i.e., non-seasonally adjusted) monthly employment estimates are available for all sub-state metro areas.

New York’s pandemic-related job losses initially were concentrated in New York City, the national epicenter of the COVID-19 outbreak. In mid-March 2020, then-Governor Cuomo responded to the mushrooming public health crisis by issuing an emergency order (New York State on PAUSE) imposing broad lockdowns on most normal business and social activities across the state. (With many fewer restrictions, the “emergency” technically has been continued under Governor Hochul.)

Private payrolls have been inching back to pre-pandemic levels since hitting bottom in April 2020—although New York’s recovery continues to trail the U.S. as a whole and all but a handful of states. More recently, however, a familiar regional differential has re-emerged in New York’s employment numbers.

As illustrated in the chart below, downstate New York (New York City, Long Island the lower Hudson Valley, which comprise the Metropolitan Commuter Transportation District) is closer to full recovery than the 50 counties of upstate New York (everything north of the Orange and Dutchess County lines).

The regional divergence has been more extreme when viewed across 10 years. While short of a full post-pandemic recovery, downstate employment as of July was a whopping 733,000 jobs higher than in July 2012, a net difference of more than 14 percent. Upstate employment, by contrast, was barely above the 2012 level — up just 22,000, or about 1 percent.

As shown by the following regional breakdown of pre- and post-pandemic summer payrolls across New York, total upstate private employment 3.5 percent below the last pre-pandemic summer measure—a full percentage point below the downstate shortfall of -2.5 percent. Albany-Schenectady-Troy was the only major upstate metro area within two percentage points of its pre-pandemic mid-summer employment total; the only upstate area within two points of its 2019 employment was relatively tiny Ithaca (dominated by Cornell University). 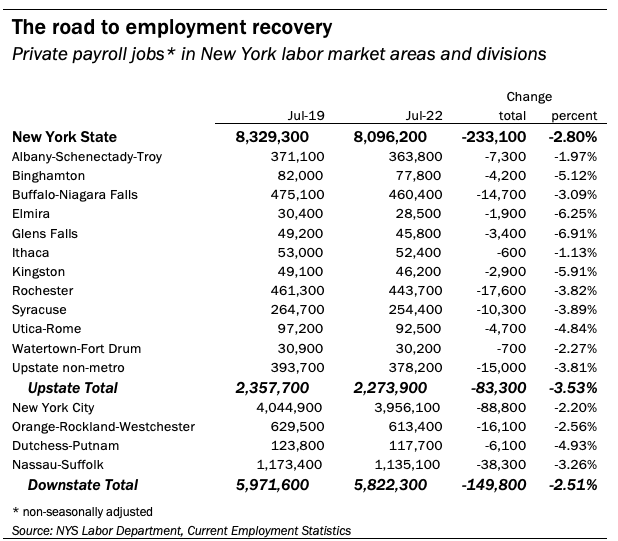 The tale of two states continues

As I noted in this article in the Winter 2020 edition of City Journal:

Upstate [New York] trends are consistent with a broader national pattern of rural and small-city decline. In New York, however, the cycle of decline dates back earlier—at least to the 1980s. Why is upstate New York notably weaker than comparable areas in the Midwest? Higher taxes—driven by the exceptionally high costs of public-employee compensation and Medicaid in New York—are part of it. Upstate employers also must deal with (among other things) some of the nation’s highest workers’ compensation insurance rates, a uniquely expensive liability standard on construction projects, a state “environmental quality” law that makes it easier to slow down development, mandated union preferences for all public works, and—most recently—a virtual ban on expansion of natural gas pipelines.

During his more moderate, first-term incarnation, Governor Cuomo initiated some pro-growth policies beneficial to upstate, including a statewide 2 percent cap on local property-tax increases and a business-tax reform that eliminated state corporate taxes on upstate manufacturing operations. But he undermined upstate growth prospects with the 2014 fracking ban and his 2016 push for a statewide $15 minimum wage—though the then-Republican working majority in the Senate secured a regionally differential schedule, imposing lower, slower increases in the upstate minimum (pegged at $11.80 as of 2020 and rising to $12.50 next year).

Cuomo more recently has veered aggressively leftward, signing virtually every major piece of progressive legislation that made it to his desk in 2019. These included the Climate Leadership and Community Protection Act, which will embolden the governor’s war on fossil-fuel infrastructure, along with his aggressive push for greater reliance on solar panels and offshore wind-turbine projects. One inevitable result of this deep-green agenda will be higher electricity costs upstate, where—for now, at least—utility rates remain roughly in line with or even below national norms. Cuomo also signed the Housing Stability and Tenant Protection Act, which permanently extends New York City–style rent regulations (including a local rent-control option) to upstate communities that already have ample affordable housing.

In yet another blow to upstate, the legislature passed a Cuomo-supported farm-labor rights and unionization bill, even as the New York Farm Bureau and other agriculture groups denounced it as costly and unbalanced in its treatment of family farms. As if to underscore upstate’s marginalized status, Cuomo staged the bill’s signing ceremony in the lower Manhattan city room of the New York Daily News.

Upstate counties, mostly in the upper Hudson Valley, did derive some population gains from the outmigration of New York City residents to suburbs and rural areas in the year following the COVID-19 outbreak. More recently, however, sluggish real estate activity indicates this trend has ground to a halt. Looking ahead, in an era of renewed inflation, with the possibility of a recession looming (assuming it has not already arrived), upstate’s stubborn economic weakness again looms as a glaring Albany policy failure.