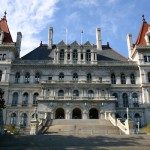 Quarterly, throughout the fiscal year, the governor shall submit to the comptroller, the chairs of the senate finance and the assembly ways and means committees, within thirty days of the close of the quarter to which it shall pertain, a report which summarizes the actual experience to date and projections for the remaining quarters of the current fiscal year and for each of the next two fiscal years of receipts, disbursements, tax refunds, and repayments of advances presented in forms suitable for comparison with [previous required financial plans and quarterly updates]. [Emphasis added.]

The mid-year update is due every year within 30 days of the Sept. 30 close of the state’s second fiscal quarter—or, fittingly enough, the eve of Halloween, Oct. 31.

In previous years, the mid-year update has provided early warnings of revenue trends that might point to budget shortfalls ahead. This year, with cash reports indicating that tax receipts have been coming in slightly ahead of the previous plan projection, the revenue side is of less concern.

The big unanswered question now, fully seven months into fiscal 2020, is what (if anything) the governor will reveal about his plans for dealing with what’s shaping up as a current operating deficit caused by his rollover of Medicaid spending from FY 2019 into FY 2020.

As Bill Hammond noted in this space two weeks ago, the comptroller’s monthly cash reports show Cuomo burned through 61 percent of the state-funded Medicaid budget during the first six months of the fiscal year. And that points to a potentially very big problem:

The looming deficit originated with Cuomo’s furtive rollover of $1.7 billion in state-funded Medicaid from March into April, which maintained the illusion that Medicaid spending for FY 2019 had stayed under his “global” Medicaid cap. Cuomo’s last quarterly financial plan update—also issued behind schedule, in August—warned the administration was developing a plan to reduce Medicaid spending that could include “across-the-board rate reductions to health care providers and plans.”

Going back to the early 1990s, governors Mario Cuomo, George Pataki, Eliot Spitzer and David Paterson generally issued their mid-year reports on schedule or within a day or two of the Oct. 30 deadline. The current Governor Cuomo’s earliest mid-year update was issued on Nov. 6, 2015.

Cuomo set an all-time record for lateness his second year in office, 2012, when the mid-year report for fiscal 2013 appeared on Nov. 29, closer to Christmas than Halloween. Last year’s mid-year report, issued Nov. 9, said the financial outlook was improving—although, even then, the state comptroller was warning (presciently, as it turns doubt) that tax revenues were eroding.

Under another section of state Finance Law—Section 23.5, the so-called ‘Quick Start” budget process reform of 2007— Nov. 5  is the deadline by which “appropriate personnel” for the governor, comptroller and legislative leaders are required to “separately prepare and make available reports on estimated state receipts and state disbursements for the current and ensuing fiscal years.”

If the past is any guide, Comptroller Thomas DiNapoli will issue his report on schedule sometime today*—while the legislative fiscal offices will join the governor in ignoring this deadline, too.

PS — The comptroller’s report was issued late this morning.