On the employment side, the state Labor Department’s September count of private-sector jobs was up 75,300 on a seasonally adjusted basis, but remained more than 1 million below the level of the same month a year earlier. As shown below, the pace of the state’s jobs recovery on an annualized basis has fallen off considerably since regional economies first began reopening in spring and early summer. 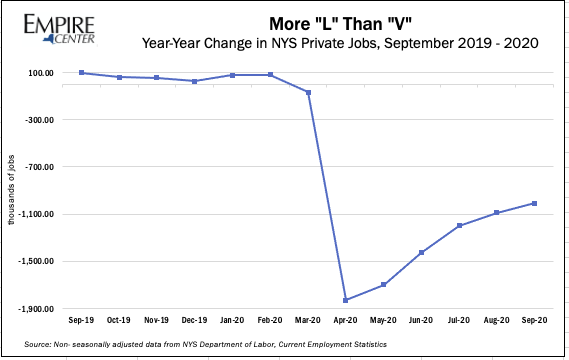 Private employment in the Empire State as of September was still 12.1 percent below the level of a year earlier, compared to a net 6.9 percent drop during the same period nationally.

On a regional level, as shown below, COVID-ravaged New York City unsurprisingly remained the furthest below its 2019 job count, but all of upstate’s largest metro areas also remained deep in negative territory, with declines ranging from 9.6 percent in Buffalo to 11.8 percent in Syracuse—even though these regions had much less severe COVID-19 outbreaks, and their business shutdowns began lifting sooner. The much smaller Glens Falls and Watertown-Fort Drum areas had job declines rivaling New York City’s. 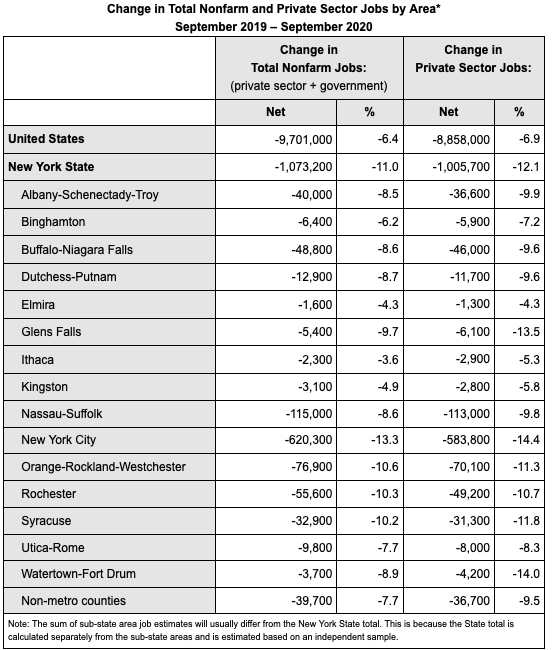 The monthly cash report from state Comptroller Thomas DiNapoli’s office surprised moderately on the upside. Particularly noteworthy was the personal income tax (PIT) receipts total for September: at nearly $5.3 billion, the total net of refunds was a solid 7 percent above the mid-year projection for the month of $4.9 billion, and also above the September 2019 net PIT receipts total of $4.8 billion. (The gross before refunds was also up over last year, but by a much smaller amount.)

In fact, despite the crushing impact of the coronavirus, PIT receipts for the month of September alone were the highest on record. To be sure, some of this might be a product of technical factors, such as shifting calendar payroll periods and a large decrease in refunds paid compared to September 2019. Still, the net number for the month was a positive development when compared to projections laid out in the first quarter financial plan update released by Cuomo’s Division of the Budget two months ago.

The components of September PIT receipts also were noteworthy. Quarterly estimated tax payments by business owners, investors and the self-employed were down $232 million, or 8.5 percent, on a year-to-year basis. But income tax withholding payments, reflecting a set percentage of weekly and biweekly paychecks, were actually up at $3.15 billion, a 10 percent increase over the roughly $2.9 billion collected in September 2019.

The withholding numbers reflect the disparate impact of the pandemic recession: job losses are concentrated among New York’s lower-paid service-sector workers, who generally pay little or nothing in state PIT while working in part-time or partially tip-based jobs. Better-paid workers with secure work-from-home or otherwise “essential” public- and private-sector jobs—subject to higher withholding rates—have held their own on the wage front.

On the whole, PIT receipts through the first half of the state’s 2021 fiscal year remain $1.1 billion, or 4 percent, below the FY 2020 first half level. The first quarter financial plan projected that PIT receipts for the entire fiscal year, through next March 31, would be down 9 percent.

Consumption and use taxes in September also were surprisingly strong, coming in at $1.7 billion, compared to a projection of just under $1.3 billion. But the monthly total remained almost $100 million below the level of September 2019. Dragged down by the horrible spring, state consumption and use taxes for the first six months of FY 2021 are still down a whopping $1.4 billion, or nearly 16 percent, from the total a year ago for the first half of FY 2020.

Including business taxes and other tax categories, the bar chart comparative figures on the comptroller’s cash report page show state receipts are up about  $1.145 billion from first quarter projections, and federal receipts are about $804 million above the last projection—and, boosted by enhanced Medicaid reimbursements and other coronavirus relief aid from Washington, nearly $11 billion above the FY 2020 level at this point in the fiscal year.

If revenues remain this far above projections, they will help erase at least some of the current state budget gap—which, allowing for other actions, appears to be in the neighborhood of $8 billion (perhaps a bit higher or lower, but certainly not the $14.5 billion deficit frequently claimed by Governor Cuomo). Still, there is nothing in the latest revenue report—or the employment numbers—to suggest a significantly more rapid recovery than DOB’s original, pandemic-adjusted projection, which said total taxes won’t recover to fiscal 2020 levels until fiscal 2023.

In fact, if the feared second wave of COVID infections causes Cuomo to reimpose business restrictions on any broad scale, the tax numbers could still easily fall below even the reduced projections for the year.