This isn’t exactly news, however.

Five months into a fiscal year that began April 1, the $3.2 billion year-to-date decline in state tax receipts through August was roughly in line with the latest projections by the governor’s Division of the Budget (DOB), as reported in the First Quarterly Financial Plan Update last month. DOB expects total state revenues (excluding federal aid) for all of FY 2021 will be down $9.4 billion from FY 2020, including an $8.4 billion decline in tax receipts.

Cuomo in recent months has claimed to be facing a budget gap of anywhere from $14 billion (the shortfall from his optimistic pre-pandemic January revenue projection) to $61 billion (the shortfall through FY 2024). The actual number is bad enough: adjusting for various tweaks to state agency spending assumptions, the state appears to have a deficit of up to $8 billion (perhaps somewhat less, as explained here)—which, relative to expenditures, is by far the largest any New York governor has faced at this point in its fiscal calendar.

Another noteworthy aspect of the current financial hole: the state Legislature and the Governor stepped right into it, eyes wide open. And aside from $2 billion or so in assorted, technically temporary “withholds” of scheduled aid payments, the governor has yet to pull the trigger on actual spending reductions.

In the pre-dawn hours of April 3—with much of the state’s economy shut down in response to the pandemic, state and local tax receipts drying up, and the COVID-19 death toll climbing—the New York State Legislature completed passage of a budget that authorized state operating funds spending of more than $103 billion, a slight spending increase over fiscal 2020.

Within hours, Cuomo held a news conference in which he praised the budget as “an extraordinary accomplishment” — and, in almost the next breath, acknowledged that the state faced a revenue shortfall of $10 billion, which he blamed on the coronavirus crisis.

In other words, the state started the year $10 billion in the hole.

Why didn’t Cuomo slash proposed spending when it became obvious the bottom had dropped out of revenues?

The answer: on his own, he couldn’t.

Under Article 7 of the State Constitution, once the governor sent the Legislature his 30-day Executive Budget amendments in mid-February, he could not make further changes to his appropriations bills, which would become law without any further action on his part. For weeks leading up to the full pandemic shutdown of the economy on March 22, and certainly thereafter,  it was clear the budget needed to be slashed by billions of dollars—but the Legislature, not the governor, would have had to initiate those cuts.

Distracted by the COVID-19 outbreak, Cuomo said almost nothing in public about this immense and growing fiscal problem posed by the pandemic during the pre-budget adoption period in late March; whether or not he privately asked legislative leaders, reductions obviously were not made. The governor’s main spending control tool is the line-item veto, but this year there were no significant line-item additions to veto. The Legislature spent excessively merely by spending what Cuomo had originally proposed.

Again, whether Cuomo resisted this in any way behind the scenes is unknown; he certainly gave no hint of it in public. However, as a crucial contingency measure, Cuomo persuaded the Legislature to give him unprecedented discretion to unilaterally reduce local assistance appropriations, which make up nearly two-thirds of state operating funds spending but which by law would not otherwise be subject to delay or impoundment by the executive.

The new powers were set down at the beginning of the Local Assistance Budget Bill as follows:

The updated state financial plan tables issued since April have included, in the Local Assistance category, a “Budget Balance Reduction” figure of $8 billion. (Keeping in mind that the provision expanding Cuomo’s budget-control powers excludes public assistance and federal entitlement programs, including most of the Medicaid budget, that $8 billion figure represents 20 percent of the roughly $40 billion in remaining local assistance spending subject to change by the governor.)

In addition to cutting spending, the budget language allows the governor to “withhold all or some of the amounts appropriated herein, including amounts that are to be paid on specific dates prescribed in law or regulation.” It further requires that, five days before the start of each month, the budget director provide the Legislature with “notification of payments that are expected to be withheld in such month pursuant to this provision,” and that seven days after the end of the month, the DOB director follow up with notification of “payments that have been withheld pursuant to this provision.” 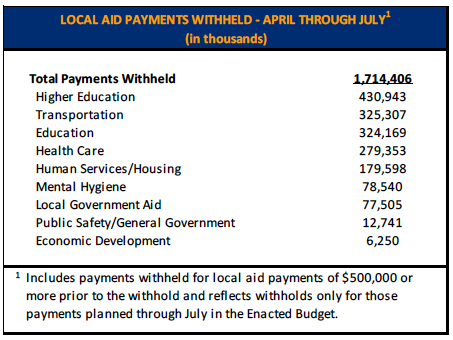 However, Cuomo’s notifications to the Legislature —compiled into a single pdf file for downloading here—have identified slightly less than $500 million in withholdings through August.

Why the discrepancy? A DOB spokesman said the written notifications to the Legislature itemized only those payments linked to a statutory due date. But this sounds like an overly broad reading of the law—which, after all, authorizes the governor to withhold aid including, but not limited to, appropriations “to be paid on specific dates prescribed in law or regulation.”

In walking into a $10 billion hole, Cuomo assumed he’d actually land on something of a trampoline, in the form of additional unrestricted federal aid to states and local governments under a fifth stimulus bill. At the time, it appeared such a bill would emerge from Congress before congressional recess in early August. And after all, under the last stimulus bill (the CARES Act) enacted in March, New York State already had collected $1 billion in special aid to Title 1 schools serving the disadvantaged and $5.1 billion from a Coronavirus Relief Fund, whose parameters have since been broadened beyond expenditures strictly related to COVID-19 expenses.

But as summer wore on, House Democrats, Senate Republicans, and the Trump administration seemed to move further and further apart. In July, House Democrats passed the HEROES Act, a $3 trillion omnibus package that included $900 billion for states and localities in addition to extended supplemental unemployment insurance and lots of other items. New York State’s share of that allocation would have come to at least four times as much as Cuomo actually needs to close his gap this year—enough, in fact, to balance New York’s state budget with no significant cuts through fiscal 2023.

Designed to score political points among constituency groups including governors and mayors, the bloated HEROES Act ultimately backfired, hardening the opposition among conservative Republicans to providing any additional amount of state or local government relief. President Trump, most focused on sending another relief check in advance of the election, has implicitly endorsed at least $150 billion for states and localities as part of a compromise package. But as of this week, House and Senate leaders are deadlocked, rejecting a $1.5 trillion package (with $500 billion for states and localities) offered by the bipartisan House Problem Solvers Caucus, whose members include three New York Democrats (Tom Suozzi, Max Rose and Anthony Brindisi) and two Republicans (Tom Reed and John Katko).

Before Oct. 1, Congress needs to pass a continuing resolution to fund the federal government through the end of the year. If that measure isn’t coupled with more stimulus aid, it is unlikely the issue will be taken up again until after the election at the earliest.

What will Cuomo do if he gets no federal aid before the end of 2020? If Democrats have swept federal elections and Cuomo thinks such aid is almost guaranteed to be forthcoming from a Biden Administration, his response is likely to include a one-year extension of the $4.5 billion in short-term borrowing he’s already done. But he also seems likely to resist pressure for a soak-the-rich income tax hike until he is also confident that the state and local tax (SALT) deduction cap will be raised.

The worst mid-year shortfalls on record came in:

While those shortfalls (all treated at the time as severe problems) ranged from 3 percent to 5 percent of general fund expenditures, the state’s current financial hole is equivalent to more than 12 percent of the general fund and about 8 percent of state operating funds. And if this year’s deficit is not closed with recurring cuts, the projected budget shortfall for Fiscal 2022 is a record $17 billion.