The Tax Foundation has posted a nifty interactive map depicting “Migration of Personal Income” among the states. Based on Internal Revenue Service (IRS) data, the foundation says net migration from New York between 2000 and 2010 translated into a net loss of $45.6 billion of income. 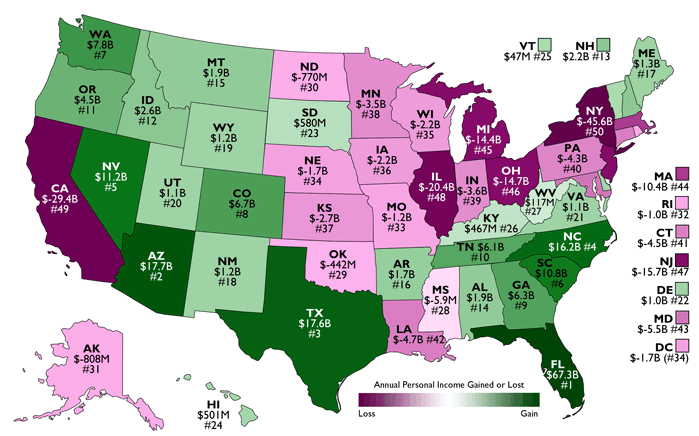 The IRS migration files track taxpayer moves among the states over two-year periods, the most recent being 2009-2010.  As explained in this IRS document, “it is important to note that the income information reported on the migration files is for the tax year corresponding to the earlier of the 2 years.”  In other words, the income considered “lost” or “gained” on the Tax Foundation map is the sum of the annual adjusted gross income (AGI) of migrants earned by filers beforethey moved.

For this reason, among others, the income migration data need to be taken with a big grain of salt. After all, very few taxpayers earn the same income two years in a row.  Some earn more, some less.  Among those likely to be earning less in 2010 than they earned in 2009 were New Yorkers retiring to Florida.  Among those earning more were young people from the midwest who landed their first full-time jobs in Manhattan during the same period.

In one of our reports on migration trends a couple of years ago, Bob Scardamalia and I noted that the IRS had tracked a net loss of $37 billion in AGI from moves in and out of New York between 2000 and 2009.  We added, however:

Incomes change over time, so this does not necessarily mean New York was $37 billion worse off at the end of the period than it would have been if no moves had occurred during this period. At the very least, however, the average incomes of migrating taxpayers reflect New York’s ongoing loss of earning power – and, in many cases, job skills — to other states. [emphasis added]

Going back to that Tax Foundation map, some of the people who fled New York in the early 2000s are now earning a lot less than they did before they left.  Others are earning more.  But the same is true of those who moved into the Empire State, including people who were recent college grads in the early 2000s.  Some people who moved out of New York moved back in (it does happen).  And others who moved into the state in, say, 2001, later moved out.  Indeed, one of New York’s chronic problems is that highly skilled, well-educated people who come here in their 20s tend to leave in early middle age.

The only way know for sure how much income New York lost from domestic migration between 2000 and 2010 in present-value terms would be to track all the (still living) individuals who moved in and out of New York between 2000 and 2010 and compute their incomes.  There’s no telling what the result would be — but it almost certainly would not add up to exactly $45.6 billion.  It quite possible would have been billions higher or lower than that.  It probably would have been a negative number in any case.

This much is beyond doubt: New York lost a net 2.9 million residents to other states between 1990 and 2010 – the biggest domestic migration outflow, relative to population, of any state during that 20-year period. People are voting with their feet, which should be (but hasn’t been) enough to jolt Albany politicians out of their complacency with the status quo.