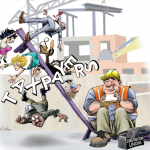 As shown below, the union coverage level in New York’s private construction industry hit an all-time low of 21 percent in 2018, according to the Union Coverage and Membership Database, which in turn is derived from federal population and labor data. Adjusting for volatility in the annual state-level estimates, which are derived from statistical samplings, a five-year rolling average of the annual estimates has declined from 41 percent as 1988 to just 28 percent as of 2018. By this measure, union coverage in New York’s construction industry hasn’t been above 30 percent since 2005. 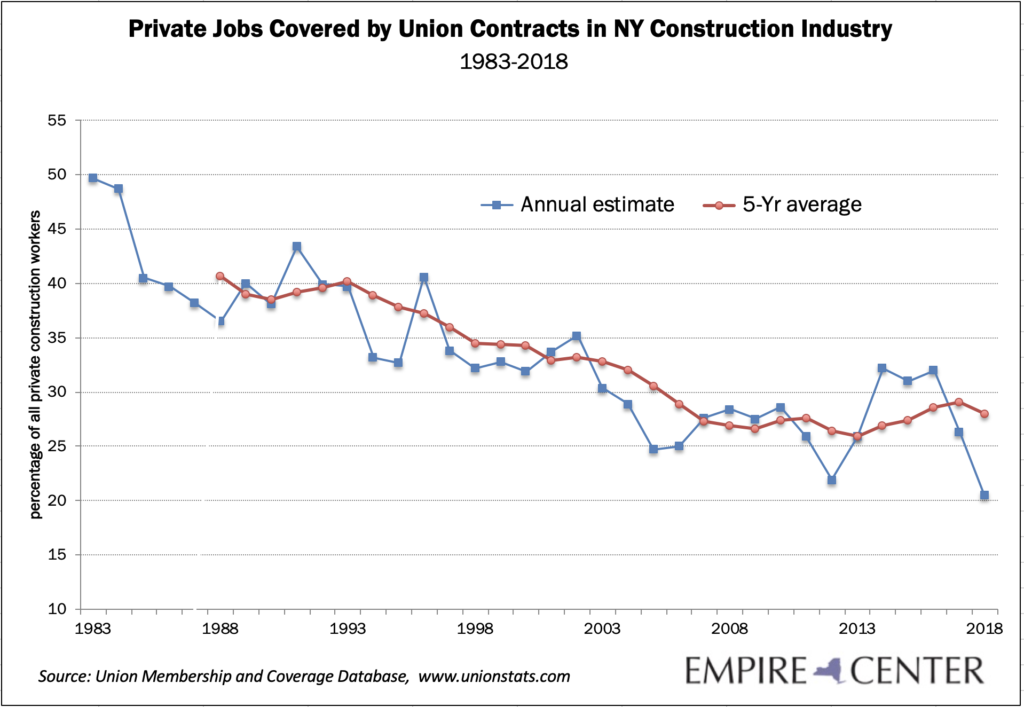 Article 1, Section 17 of the state Constitution says construction workers on public works jobs—including all government-owned and -funded buildings and infrastructure—must be paid “the rate of wages prevailing in the same trade or occupation in the locality within the state where such public work is to be situated.”

While promoted by its advocates as the equivalent of an industry-specific minimum or living wage, the pay requirement goes much further, imposing combined hourly wage and “supplemental benefit” levels that range from $43 an hour for laborers (the least-skilled trade) in the lowest-cost region (Syracuse) to more than $100 an hour for operating engineers in New York City.

As a result, a 2017 Empire Center study conservatively estimated, the law boosts public works costs by at least 13 percent in some upstate regions to 25 percent in New York City, where union work rules contribute to the notorious inefficiency of transit infrastructure projects. Beyond those levels, the law further boosts costs and saps productivity by effectively imposing inefficient union work rules upon public projects.

The term “prevailing wage” is a misnomer, since what the law actually requires is neither truly “prevailing” (as the word is commonly defined) nor limited to wages.

Based on Section 220 of Labor Law, the New York State Labor Department (NYSDOL) defines “prevailing” as the wages and benefits mandated by union collective bargaining agreements that cover at least 30 percent of the workers in a given trade in each locality. In addition to union wages, it requires payment of the supplemental benefits required by union contracts, which can equal or exceed the actual wage. Between 2007-08 and 2017-18, more than half of the compensation increase for workers on New York government projects was driven by supplemental benefits, including increased contributions needed to bail out severely underfunded union pension plans.

In some cases, this crowding effect caused workers to experience a pay cut in real terms.

The misnomer is compounded by an administrative mystery, since NYSDOL repeatedly has refused to publicly release copies of the construction union contracts and pay scales it uses as the basis for its prevailing wage calculation. Nor will it disclose the headcount of workers supposedly covered by those agreements. In addition, neither NYSDOL nor the New York City comptroller’s office, which sets the public works pay scales in the city, is required to survey employers to independently verify that the threshold actually is being met.

As unionization of the industry continues to decline, the latest data make it clearer than ever that the 30 percent construction coverage threshold is not being met in New York—least of all in upstate regions, where private-sector unionization in general is lower. Under the alternative laid out in state law, public works labor compensation for most trades in most of New York should now be pegged to the actual “average” prevailing in each locality. This would yield a much lower compensation figure in all regions, based on federal occupational statistics.

While public works contractors in New York have legal standing to challenge the wage mandate, potential plaintiffs face a legal Catch-22: the burden of proof is on any party seeking to challenge a wage determination, and courts have ruled government agencies cannot be compelled to share the kind of “extremely broad and undefined” information needed to demonstrate that the coverage threshold has been met.

The insistence on enforcing a dubious definition of “prevailing” compensation is driven by Governor Andrew Cuomo’s strong political alliance with construction unions. More than any of his predecessors, Cuomo has usually supported the construction unions’ agenda, most notably during a largely unsuccessful two-year battle to impose the union compensation mandate on privately sponsored affordable housing projects linked to New York City’s 421-a property tax abatement program. He also has continued to push project-labor agreements, or PLAs, as part of most infrastructure contracts.

This year, Cuomo has expressed support for expanding the union compensation mandate to economic projects indirectly supported or financed by state and local governments. Given the near-dearth of large-scale fully private development in upstate New York, such a mandate is likely to severely hamper new projects across the region, a business coalition has warned.