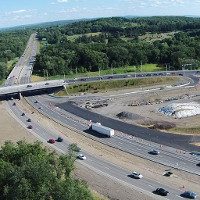 A highway construction project hailed by Governor Andrew Cuomo as a “critical investment” was also a glaring example of what New York is doing wrong when it comes to rebuilding its transportation infrastructure.

The reconstruction of Exit 122 on Route 17 in Orange County, originally slated to begin in 2011, was delayed by over a year because the state Department of Transportation (DOT) improperly steered construction work to a firm that pledged to use union labor.

Not only did DOT disregard the lowest bid (see page 2) in favor of one $4.5 million higher, it also saddled taxpayers with up to $22 million in costs from having to stop the work after a judge ruled it had wrongly awarded the contract.

The complications stemmed from DOT requiring bidders to use a project labor agreement, a collective bargaining agreement with trades unions that guarantee them a minimum amount of work, typically more than 80 percent. Mandatory PLAs on public works jobs effectively disqualify non-union contractors from bidding. In the case of Exit 122, that PLA requirement was added after companies had already begun assembling bids.

The result was a unique glimpse at bids both with and without project labor agreements. In this case, DOT could have shaved about six percent off the cost if it hadn’t forced bidders into using a PLA. On a project such as the Tappan Zee Bridge replacement, on which the Thruway Authority required a PLA, that extra six percent would amount to close to $200 million in added cost—more than the $130 million in tolls brought in by the current bridge.

While PLA proponents routinely claim that the agreements can achieve savings, there’s nothing stopping bidders from choosing to use them even if they aren’t required. In fact, if PLAs really offered myopic benefits, it would behoove all contractors to enter into them to achieve the lowest bid.

Some of these savings come from a claim that they prevent strikes, picketing and other strife, but recent history indicates otherwise. For example, employees covered by a PLA went on strike in July at a number of New York City construction sites, including the Hudson Yards development project, only returning to work after being ordered by a federal judge.

Governor Cuomo has previously pushed the use of PLAs on a broader scale. For example, his proposed reauthorization of the state’s design-build statute in 2014 would have mandated their use on any project worth more than $10 million.

With legislators pressing Governor Cuomo and the DOT to develop a five-year program to guide its transportation infrastructure spending, Exit 122 offers a reminder of why they should avoid hardwiring state projects with project labor agreements.