In the race to vaccinate its oldest and most vulnerable residents, New York has fallen behind.

Although the state’s overall COVID-19 vaccination rate is somewhat higher than the national average, there is a significant gap between age groups.

New York ranks just 44th for the percentage of people over 65 who have received at least one shot, according to CDC data.

By that same measure, It ranks 24th for immunizing the total population over 18, and 9th for the population between 18 and 65.

The disparity suggests that New York’s vaccination policies and procedures are giving younger people an advantage relative to other states. 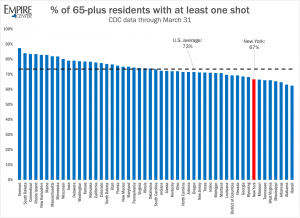 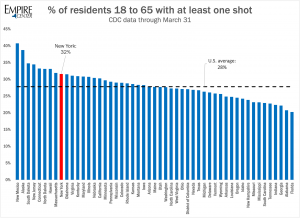 Nationwide, older people were generally given priority for vaccination because they face a far higher risk of death from COVID-19. As a result, the share of older Americans who have received a first shot, at 73 percent, is much higher than the rate for the 18-to-65 population, at 28 percent.

The ratio of younger to older New Yorkers who have received a first shot is 1.75-to-1, the seventh highest in the country.

This may relate to the number of younger New Yorkers who were competing for limited slots at any given time, and the process for finding and scheduling an appointment, which gives an edge to the computer-savvy.

When the vaccine first arrived in mid-December, the Cuomo administration mainly prioritized people in high-risk occupations, such as hospital workers and coroners, who are generally younger than 65. The only older New Yorkers who were eligible were residents of long-term care facilities, whose shots were administered by chain pharmacies under a federal contract.

The state’s eligible list was broadened to include people of any age with a range of co-morbidities on Feb. 14, everyone 50 and over on March 23, and everyone 30 and over on March 30. As of this coming Tuesday, April 6, appointments will be available to every New Yorker over 16—which is the entire population for which the vaccines have been approved.