This has been a lost decade for employment in New York State, where the total number of payroll jobs is now below the 2000 level.

The Empire State’s job drop has been concentrated in the private sector.  As of July, New York’s private firms employed 122,000 fewer people than they had in July 2000, and 247,900 fewer than in 2008.  New York’s rate of job loss during the latest recession was less than half as severe as the national norm.  However, after gaining private jobs more slowly than average during the 2003-07 expansion, the state also had less to lose.

By contrast, New York’s state and local governments still employ 28,600 more people than they did 10 years ago, even after a recession-induced decline in the past year.  As detailed in this report, wage data also reflect a divergence between New York’s private and public sectors: 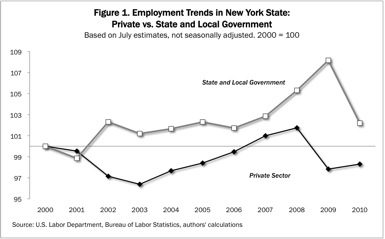 After losing nearly 300,000 private sector jobs between 2000 and 2003, the state began a slow economic recovery that trailed the national average during the expansion that ended in 2007. Private-sector employment in New York hit a record level of just over 7.4 million in mid-2008, and then plummeted in the wake of the financial crisis and recession. As of June 2010, non-seasonally adjusted private payrolls in New York stood at just over 98 percent of the their July 2000 levels. Nationally, private-sector employment in July stood at about 97 percent of the 2000 level.

By contrast, state and local government employment in most regions of New York was barely affected by the economic shocks of 2001-03 and rose to a new all-time high of more than 1.4 million a full year after the onset of the latest recession. After dropping 80,000 in the past year, government jobs still stand at 103 percent of the 2000 level.

As shown below, the most recent growth in state and local payrolls has occurred entirely outside New York City. Within the city, private-sector employment is slightly higher than it was 10 years ago, but the state-local sector is smaller. 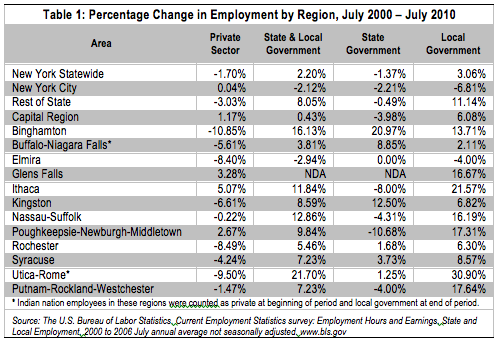 Even after subtracting Indian tribal payrolls[1]—which the federal government reclassified as “local government” during this period—we estimate the net growth in state and local government jobs outside New York City has exceeded 7 percent since 2000.

Digging a little deeper into the numbers, local public schools outside New York City added 37,800 jobs over the last 10 years, a growth rate of 14 percent. All other employment by counties, cities, towns and villages declined by about 5,700 jobs, or 1.8 percent.

New York’s recent growth in public-sector jobs is actually below national trends. State and local government employment across the country is up 9.2 percent over the past decade—a much different story than the 3% declinein private sector employment during the same period.

Government jobs are not only virtually recession-proof—on average, in the majority of New York communities, they pay more, too.

The latest estimated statewide average salary for all jobs in the state and local government sector is $51,520, which is 88 percent of the private sector’s $58,850 salary average.  However, the private-sector figure is inflated by a large concentration of very highly paid jobs in Manhattan’s financial sector. When average salaries are broken down by place of work on a regional basis, a different picture emerges: in 55 out of 62 counties, government workers collect higher average salaries than private-sector employees, as detailed in Table 2.

Some noteworthy aspects of the average salary comparison:

Wages and salaries are only part of the compensation story.  Government employees also enjoy an edge in several other significant respects:

More time off—Most government workers in New York are entitled to 12 paid holidays, two more than the average allowed by private employers.[2] Many government workers (for example, those employed by New York State and New York City) can qualify for four weeks of paid vacation (plus holidays) after as little as seven years; in the private sector, most workers need to put in 15 years before getting four weeks of vacation.[3] For school district employees, of course, time off per year is measured in months rather than weeks.

Bigger retirement benefits—It has been well documented that both pensions and health benefits for retired public-sector workers in New York are significantly more generous than those available to private-sector workers. On average, government workers can retire earlier and receive more from their former employers in retirement, including guaranteed pensions and health benefits, on top of federal Social Security and Medicare.[4]

Greater job security– Union contracts and civil service guidelines provide most government workers with the equivalent of tenure. Layoffs are rare, even in severe economic downturns.  More often than not, elected officials respond to budget shortfalls by raising taxes, freezing hiring and offering experienced employees even more generous pensions as an incentive to retire early.

To sum it up, state and local employees across the country enjoy a 44 percent hourly pay premium over the people they work for, according to the official data.  The actual compensation gap is larger, however, because public accounting standards also understate the value of retirement benefits promised to current public employees.

Private sector wages slumped or even decreased in many parts of New York State during the recession that officially began in late 2007.  Public-sector wages, however, generally kept on increasing.

Table 3 on the next page illustrates regional trend in private, state and local government average wage growth between 2007 and 2009.  As shown, the average state and local government wage increased faster than private wages in every region except the thinly populated North Country.  The 7.25 percent growth in average state employee wages reflects across-the-board pay increases, including retroactive pay hikes relating to previous years.

The divergence between average private and public sector wages in the depths of the recession was greatest in New York City, which was hit hardest by the decline in financial sector compensation, and in the mid-Hudson region, where state and local government wage growth was exceptionally strong despite a net decline in private-sector wages.  Strong private-sector wage growth in the Capital Region reflected, in part, the ripple effect of strong growth in state government salaries and of state-subsidized economic development. 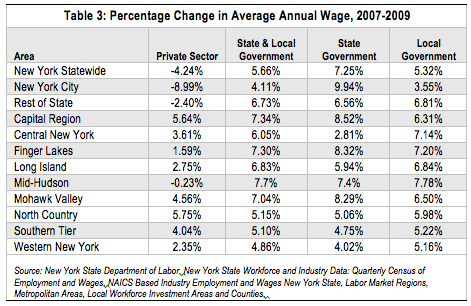 Although union membership is in a long-term decline throughout the country, New York remains one of the nation’s most heavily unionized states, as shown below in Figure 2. Just over two million New York State workers are union members, and over half of them work in the public sector. One out of every eight workers in the Empire State is a unionized government employee; in the rest of the country, the ratio is roughly one out of 17 workers. 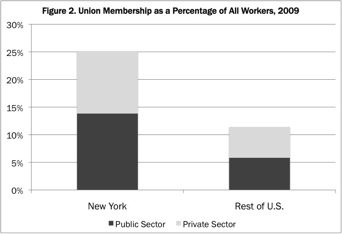 While New York’s private sector economy has yet to fully recover from its latest downturn, state and local government employment remains near an all-time high. Government workers remain more secure, and generally better compensated than private-sector workers. If state officials continue to embrace key legislative objectives of unions representing government workers and employees of government-subsidized non-profits, the relative strength of New York’s public sector is only likely to continue increasing–at the inevitable expense of the private sector.

1 Previously counted in the private sector, Indian Enterprises were reclassified as “local government” between 2003 and 2005, but are not reported as a separate category in the government sector. According to their economic impact statements, the Oneida, Seneca and St. Regis Mohawk tribes employ about 7,700 people, mainly at casinos and hotels, in Onondaga, Oneida, Madison, Franklin, Niagara and Allegany counties.

4 See, for example, the June 2006 Special Report of the Empire Center, Defusing New York’s Public Pension Bomb: A Fair Approach for Workers and Taxpayers, at www.empirecenter.org, and the Citizens Budget Commission report, Old Assumptions, New Realities: The Truth About Wages and Retirement Benefits for Government Employees, at www.cbcny.org.