New York’s bluest counties are posting the lowest coronavirus vaccination rates for older residents, a striking contrast with the pattern in the U.S. as a whole.

The disparity appears to be mainly driven by Brooklyn and the Bronx, which are heavily Democratic but also have unusually low vaccination rates.

This suggests that that variation in New York’s vaccination rates is relatively less affected by party affiliation and more affected by other factors, including poverty and vaccine hesitancy.

When New York’s counties are grouped according to President Biden’s margin of victory, the counties that favored Biden by 20 points or more—which includes Brooklyn and the Bronx—have fully vaccinated only 58 percent of residents 65 or older, which is 5 points under the statewide average (see first chart). 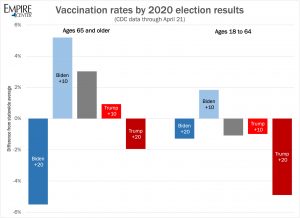 Nationally, a New York Times analysis found that counties that favored Biden generally had higher-than-average vaccination rates. Counties that voted for Donald Trump by the largest margins had the lowest 65-plus vaccination rate, six points below the average.

Interestingly, the highest vaccination rates—both in New York and nationwide—were seen in the more moderately blue counties, which favored Biden by margins between 10 and 20 points.

New York does appear to have a red-blue divide on vaccines. As seen in the second chart, which shows counties ranked by overall vaccination rates, blue counties are generally found on the higher end of the scale, and red counties on the lower end. 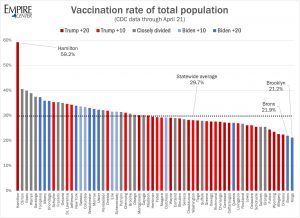 At the top and bottom, however, are outliers: The county with by far the highest vaccination rate is deep-red Hamilton, which also happens to be the largest by area and the smallest by population.

The counties with the lowest overall vaccination rates are Brooklyn and the Bronx, which are the largest and fifth-largest by population—and therefore have a big effect on the average for deep-blue counties.

Brooklyn and the Bronx have high rates of poverty, which would make it harder for residents to afford the time and expense of traveling to a vaccination site. They also have large populations of Black and Latino residents, demographic groups that some surveys have found to be relatively hesitant about getting vaccinated.

NY’s trek back to economic normalcy still far behind the rest of U.S.