New York’s progress in combating the coronavirus pandemic has stalled in recent weeks, leaving the state with the highest COVID-19 hospitalization rate and second-highest infection rate in the U.S.

The number of newly diagnosed cases per day has been virtually flat since mid-February at just under 40 per 100,000 residents, which is roughly double the national average and second only to New Jersey. 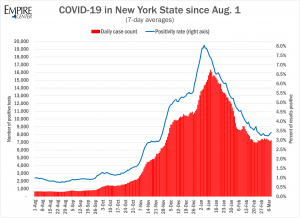 New York’s hospitalizations have been declining, but more slowly than in the country as a whole. Its rate as of March 7 was 246 per million, which was also double the national average.

The state’s current death rate of .48 per 100,000 is roughly in line with the U.S. norm, and is going down. Because mortality is a lagging indicator, that trend is likely to level off if current patterns don’t change.

New York returned to being a national hotspot during the winter wave, when its infection rate increased faster, peaked later and dropped more slowly than that of the country as a whole. 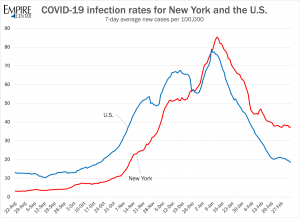 The infection rate declined sharply after the New Year, but leveled off in mid-February. The reasons are unclear, but could include an erosion of compliance with social distancing rules or the advent of coronavirus variants that are more infectious.

Around the same time New York’s progress stalled, Governor Cuomo was hit with a series of scandals over his handling of nursing home data and allegations of bullying behavior and sexual harassment.

Cuomo’s briefings on the pandemic, which have been less frequent, have accentuated positive news. He has not highlighted New York’s worst-in-the-nation hospitalization rate, and he has continued rolling back coronavirus-related restrictions, albeit more slowly than in some other states.

New York’s high infection rate might in part reflect its higher level of testing, which would identify more mild or asymptomatic cases. That would not affect its hospitalization rate, which is back to its level of mid-May 2020.

In another echo of last spring, the pandemic is once again most severe in the New York City area, including Long Island and the lower Hudson Valley.