Governor Cuomo’s Executive Budget for fiscal year 2022 authorizes an enormous increase in state-supported debt, all in the form of non-voter-approved backdoor borrowing—and all of it pointedly excluded from the state’s statutory debt cap.

The added borrowing would total $13 billion—equivalent to 20 percent of all currently outstanding state-supported debt—including:

As shown below, compared to the FY 2021 budget enacted last April 1, Cuomo’s proposed budget will boost outstanding state debt by a net $5 billion in FY 2022 (after subtracting debt retirements), and by a net $11 billion in 2025.  The budget also includes language excluding all debt issued over the next two years from the provisions of the state’s 2020 Debt Reform Law, which caps outstanding state supported debt at 4 percent of New York personal income, limits the term of bonds to 30 years, and stipulates that debt can be issued only to pay for capital construction projects. 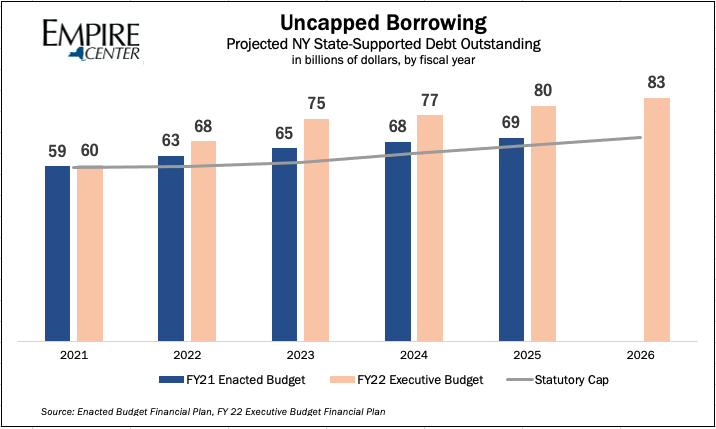 Record-low interest rates are generally offered as one justification for expanded state capital borrowing. However, interest rates are only part of the debt equation; at the end of the day, principal and interest must be repaid out of revenues, and the post-pandemic revenue picture is murky. A strong recovery is likely once all COVID restrictions cease, but the governor’s budget forecasts that employment in the state won’t recover to pre-pandemic levels until 2025.

Cuomo’s Executive Budget projects that annual debt service payments on state-supported bonds will dip slightly in the next two years, but by 2025 will be $700 million higher than had been estimated as recently as last April.

Propping up the MTA

New York State and its local governments have established numerous public authorities to operate and finance public facilities that have their own revenue sources—in the MTA’s case, mainly tolls, fares and dedicated regional taxes—thus minimizing the burden on the general tax base. For most of its existence, the MTA’s capital improvements have been financed by MTA-issued bonds, underwritten by MTA revenues.

That began to change in Cuomo’s FY 2013 budget, which included a statutory provision allowing the MTA itself, the state Dormitory Authority (DASNY) and the state Urban Development Corp. (UDC) to issue up to $770 million in “service contract bonds”—a form of state-supported debt—to help fund the MTA’s 2010-14 capital plan. That initial bond limit has been increased three times since then, reaching $2.18 billion in the same FY 2020 budget that authorized a new (but not yet implemented) congestion tolling program to underwrite additional new MTA debt. The FY 2020 budget language also expanded possible uses of capital bonding for the MTA from “transportation  facilities” to “other capital projects.”

The proposed FY 2022 executive budget hikes authorized state-supported borrowing for the MTA from $2.18 billion to $12.5 billion. It also authorizes $1.3 billion in DASNY and UDC service contract bonding for the Empire Station Complex, the name Cuomo has given to the Penn Station expansion that began with the new Moynihan Train Hall, which is sponsored by the Empire State Development Corp. (an economic development entity whose real estate financing and acquisition arm is the UDC).

Cuomo’s FY 2022 Executive Budget financial plan says the state needed to issue its own bonds for the MTA because “the adverse impact of the pandemic on the MTA has affected the credit ratings on MTA Transportation Revenue Bonds and their ability to issue bonds at attractive interest rates.” In December, the MTA borrowed $2.9 billion from the Federal Reserve’s emergency credit line for states and local governments. The state of Illinois was the only other government entity desperate enough to tap the Fed’s “municipal liquidity facility” before the loan window closed in December.

Rolling the dice on deficits

Cuomo is also seeking to extend the unusual provision, first included FY 2021 budget, that allows him complete discretion to borrow up to $11 billion on a short-term basis, in the form of $8 billion in personal income tax (PIT) revenue anticipation notes, and up to a $3 billion line of credit from banks, all repayable within the fiscal year.  Through his budget director, the governor would have complete discretion to renew the short-term notes for one more year. And at the end of the second year, the governor would have what his financial plan describes as a “contingency option” to convert all or part of the short-term borrowing into long-term deficit bonds.

The governor invoked this provision by ultimately issuing the equivalent of $4.5 billion in IOUs last summer, mainly to cover the temporary cash flow loss due to the federal government’s postponement of the income tax filing deadline from April 15 to July 15. The state plans to have repaid the entire $4.5 billion before the fiscal year ends on March 31.

The FY 2021 budget provision justified the deficit borrowing by citing the state’s need to “respond to and mitigate the impact of the [coronavirus] outbreak” and to deal with tax filing deadline shift. The proposed FY 2022 budget deletes the original language and offers no particular justification other than a continuing need to respond to the pandemic.

This didn’t escape the notice of state Comptroller Thomas DiNapoli, whose preliminary take on the Executive Budget included this:

While the factors that drove the need for short-term borrowing in 2020 have not disappeared, the level of concern has diminished due to reduced uncertainty and improved financial outlook. This calls into question the necessity of these proposals, especially at the proposed levels. Also, continuing to circumvent laws established to promote responsible and sustainable debt practices is troubling.

Unlike the federal government, which essentially prints money to cover its deficits, states and local governments are supposed to at least balance revenues and spending every year. States aren’t supposed to routinely issue long-term debt to cover operating budget shortfalls. Nor are they supposed to build up deficits through the use of short-term predicated on optimistic revenue forecasts or delayed bill payments.

In 1990, under then-Governor Mario Cuomo, the state eliminated an accumulated deficit of $4.7 billion, previously financed through annual short-term “spring borrowing,” by issuing bonds backed by sales tax receipts though a newly created entity called the Local Government Assistance Corp. (LGAC)—and effectively promising never to do it again (unless the governor and both legislative leaders agreed it was really necessary).

Barely a dozen years later, in 2002-03, the state papered over a $4.6 billion operating deficit by issuing 15-year bonds underwritten by the state’s share of revenues due to it from the Tobacco Master Settlement Agreement. That same year, the Legislature approved a byzantine deal under which another sliver of state sales tax receipts were directed to a New York City-controlled entity called the Sales Tax Assets Receivable Corp (STARC), for purposes of issuing new bonds to eliminate the $2.6 billion remaining debt of the Municipal Assistance Corp. (MAC)—which, in turn, had been set up to bond out the city’s own accumulated deficit during its brush with bankruptcy in the mid 1970s. The proposed FY 2022 budget authorizes state refinancing to wipe out the $1.8 billion in remaining STARC debt, putting both STARC and LGAC to bed for good. Both of the most dubious recent deals—the now fully paid-off tobacco revenue “securitization,” and the STARC issue—were also excluded from the Debt Reform Act limits.

In the years leading up to the pandemic, the state had returned to old bad habits by building up an accumulated deficit through delays in paying Medicaid bills from the end of one fiscal year into the beginning of the next.

While Cuomo is seeking to maintain his own ability to cover operating shortfalls with borrowing, just last May he poured cold water on Mayor Bill de Blasio’s proposal to issue up to $5 billion in deficit bonds to cover the city’s budget gap. Said the governor:

Borrowing for operating [expenses] is a risky proposition, and it has to be done with caution, if at all, because now you’re really rolling the dice on future revenues.

At that point, Cuomo had already given himself a chance to play craps. Now he wants the option of rolling the dice again if the state encounters more red ink than it can handle.