Beginning Oct. 6, the governor has imposed tightened restrictions on limited areas, or clusters, identified as having particularly severe outbreaks – a policy that has triggered protests, lawsuits and defiance in some places. The strictest restrictions, applying to so-called red zones, mandate closing schools and non-essential businesses, allow no more than 10 people in a house of worship and prohibit other gatherings.

Although positivity rates have declined within the zones, statewide numbers are still spiking.

In the six weeks since the cluster strategy was launched, New York’s rate of new infections has increased by 244 percent, to almost 5,000 per day (see first chart). The number of people hospitalized has nearly doubled, to more than 2,000. And the seven-day average death rate has increased by 125 percent, to 30 per day. 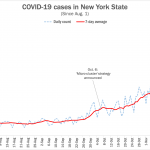 The number of clusters has also increased, from an original six zones in five counties to the current 23 zones in 14 counties.

Despite the worsening trend, Cuomo insists that his targeted strategy is working – and bristled on Wednesday when a reporter said it had “largely failed.”

He pointed to New York’s “positivity rate” – the percentage of tests that come back positive – which is lower than in any state other than Hawaii, Vermont and Maine. “We are fourth in the United States of America. … New Yorkers are doing a great job, and don’t demean them. Because the entire world is going up. It’s disrespectful to New Yorkers.”

It’s true that New York’s pandemic benchmarks are currently low compared to the rest of the country (see chart). At the current rate of increase, however, the state is on track to catch up. 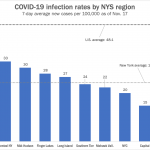 Over the first 16 days of November, New York’s rate of infections jumped 121 percent, compared to a national average of 88 percent. It was the 15th steepest rate of increase in the U.S.

The state does not publicly share the granular testing data that Cuomo uses to identify and track clusters. Based on the data that are available, the wave that began in late August seems to be affecting virtually the entire state. In 58 of 62 counties, the infection rate on Nov. 17 was higher than it was when the cluster strategy launched. The county with the highest current infection rate, Allegany in Western New York, is not currently part of a designated zone.

Despite the surge, all statewide pandemic benchmarks remain much lower than they were in the spring, when known infections peaked at almost 10,000 per day, hospitalizations got as high as 18,000 and the daily death toll repeatedly exceeded 1,000.

In parts of upstate, however, the current numbers actually look worse than in March or April, when the pandemic was concentrated in New York City and its nearby suburbs. Meanwhile, the statewide hospitalization rate has now returned to roughly where it was in early June, when the state was in the midst of a phased reopening from the lockdown of March 22 (see chart). 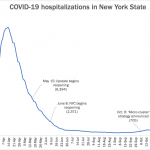 It’s possible, of course, that all of these trends would be significantly worse in the absence of the micro-cluster strategy. So far, however, the curve has not significantly bent.

This may explain why, on Nov. 11, the governor ordered bars, restaurants and gyms statewide to close at 10 p.m., and capped in-home gatherings to no more than 10 guests.

With Thanksgiving coming next week, it’s not clear how readily the public will cooperate – and some local officials have announced that they have no intention of enforcing the new limit on family gatherings.