New York State has long been home to a large share of the nation’s wealthiest households. But since the Great Recession ended, the Empire State has fallen behind when it comes to gaining additional income millionaires.

Between 2010 and 2015, the total number of American tax-filing households with adjusted gross income (AGI) of at least $1 million increased by 55.3 percent, growing from 282,311 to 438,370, according to the latest individual income tax data from the Internal Revenue Service (IRS).1

During the same period, the number of New York State resident tax filers earning $1 million or more increased from 35,802 to 50,080 households—a growth rate of about 40 percent, ranking 40th out of 50 states.

The Empire State also trailed well behind the national rate of increase in the broader high-income category of taxpayers earning AGI of $200,000 or more. From 2010 to 2015, the number of New York tax filers in that category grew by 45 percent, compared to a national growth rate of 58 percent.

These trends bear watching because they are indicators of overall economic growth and wealth creation—and because New York’s state budget is heavily dependent on revenues generated by its highest-earning taxpayers.2 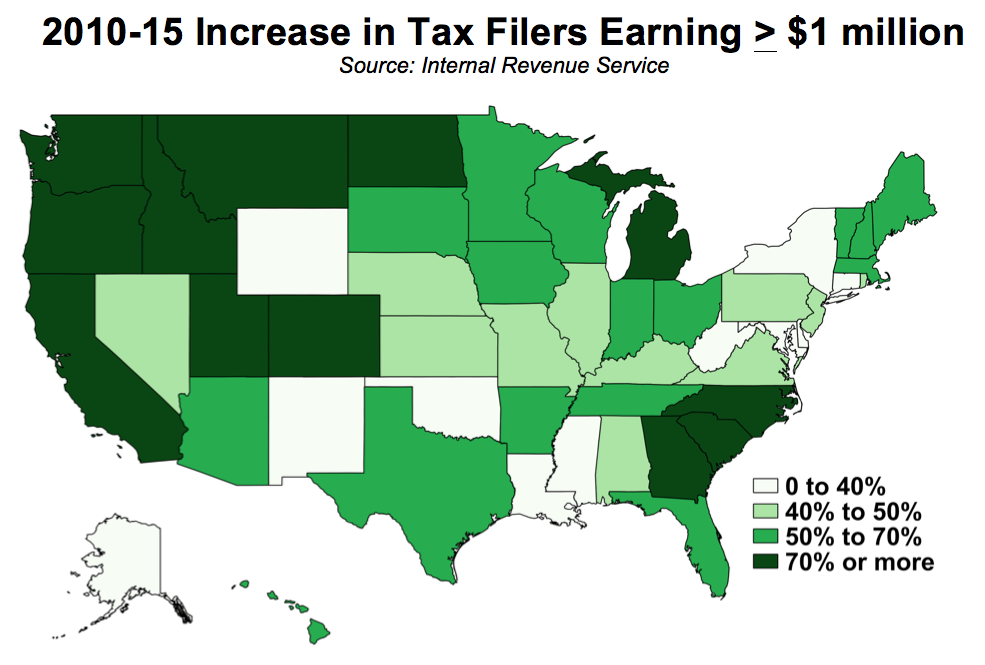 While $1 million is an arbitrary statistical threshold, it has more than symbolic importance for New York. The state currently imposes a 29 percent income tax surcharge on filers with taxable incomes3 starting at $1 million for individuals and $2 million for couples. The current state budget extended this “millionaire tax”—which raises the top rate to 8.82 percent, from the permanent base of 6.85 percent— for two years, through 2019.

New York and nine other states accounted for roughly two-thirds of federal tax filers with incomes of $1 million or more as of 2010. As shown below, four of these states—California, Florida, Texas and Massachusetts—had above-average increases in million-dollar earners from 2010 to 2015. 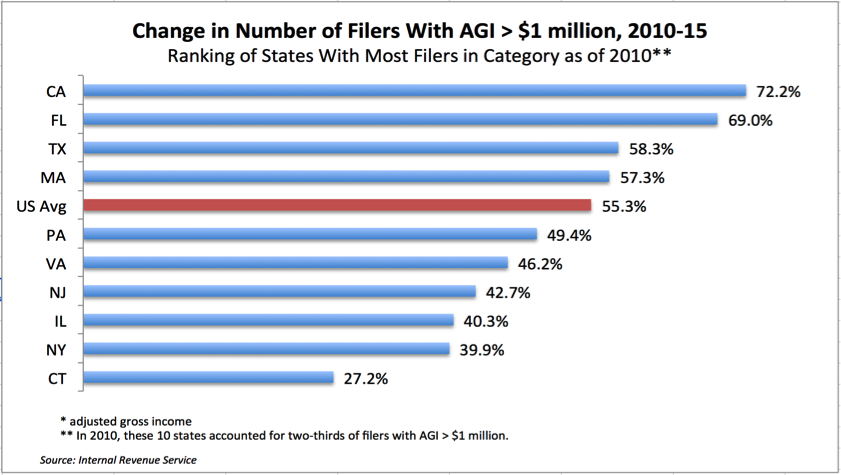 Two of the states with the biggest gains, Florida and Texas, do not impose their own income taxes. A third, Massachusetts, has a low flat rate (5.1 percent). California, however, has the nation’s highest top rate (13.3 percent). The growth in the Golden State’s income millionaire class no doubt owes a lot to the Silicon Valley tech boom, while high incomes in New York (where the top rate in New York City is 12.7 percent) can be traced largely to the financial sector.

One explanation for the comparatively slower growth in New York’s millionaire-earner class can be found in recent state tax data, which indicate that “non-resident” filers—people who earn some income in New York while living most of the year in another state—have made up a growing share of the state’s wealthiest taxpayers since 2000.4

In 2015, New York residents claimed an average state and local tax (SALT) deduction of $22,169, highest in the country. New Yorkers in the $1 million-and-up AGI class claimed an average SALT deduction of $502,191, nearly double the national average of $273,825. But even with that tax break, New York’s income millionaires generated an outsized share of total federal taxes in their income bracket: 22.6 percent, second only to California, although New York is home to 11.4 percent of the nation’s income millionaires.