All 12 of New York State’s metropolitan statistical areas had economic growth rates below the national average in 2016, according to newly released federal data.

Real Gross Domestic Product (GDP), an inflation-adjusted measure of overall economic output, increased by an average of 1.7 percent for the nation’s 382 metropolitan statistical areas last year, the federal Bureau of Economic Analysis (BEA) reported. Nationally, BEA said, the 2016 growth in real GDP by metropolitan area ranged from a high of 8.1 percent in Lake Charles, Louisiana, and Bend-Redmond, Oregon, to a low of -13.3 percent in Odessa, Texas.

The professional and business services sector, up 2.7 percent, was the leading contributor to average growth nationally. In the Buffalo area, however, growth occurred almost entirely in the finance, insurance, real estate, rental, and leasing sector, which contributed nearly 1.2 percent of the net 1.3 percent growth. This was roughly in line with the U.S. metro average, BEA figures indicated. Counter to the national trend, Buffalo area’s professional and business services sector had slightly negative growth (-0.01 percent) last year, the BEA estimated.

At the other extreme, five New York metro areas—all upstate—actually contracted last year. The largest of the shrinking metros was Rochester, where the change in economic output was -0.2 percent. Since 2011, the Rochester area’s economic output is down a net 0.1 percent, the five-year data indicate.

Ranking near the bottom of the list for all areas, nationally and in New York, was Elmira, whose real GDP was pegged at -3.8 percent last year. Only 17 metro areas nationwide had bigger decreases in economic output. Elmira had the same near-bottom ranking from 2011-to 2016, when its real GDP change was -9 percent.

All 12 of New York’s metros also grew at rates below the 10.9 percent average for all U.S. metros from 2011 to 2016, with real GDP actually decreasing for half the state’s metros during the five-year period.  Albany-Schenectady-Troy was the only upstate area to achieve even half the U.S. metro growth rate.  Buffalo, the largest upstate metro, had a 2011-16 real GDP growth rate of just 2.5 percent across the five-year period. 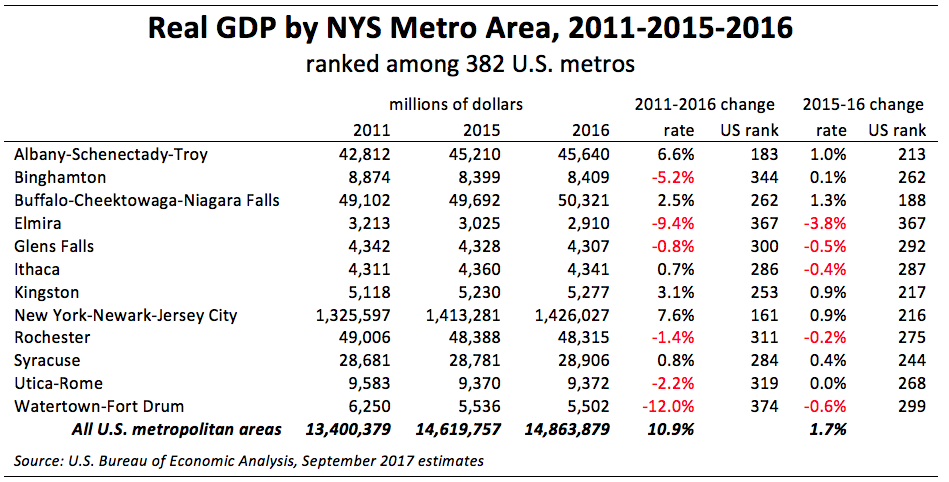 Job recovery picks up steam in NY, but still far behind rest of U.S.

Spending to skyrocket under budget deal

In Albany’s heaviest-spending year ever, lawmakers to OK even more pork