The highest earning 1 percent of New York City residents generated 43 percent of city income taxes and 51 percent of the New York State income taxes collected from individuals  living in the city as of 2016, according to newly released data from the Independent Budget Office (IBO).

The IBO’s latest tax liability estimates highlight once again New York’s heavy dependence on the top 1 percent, for which the income cut point as of 2016 was $713,706.

As shown below, the highest-earning 1 percent of New Yorkers paid more city and state income taxes than the lowest-earning 90 percent—combined. 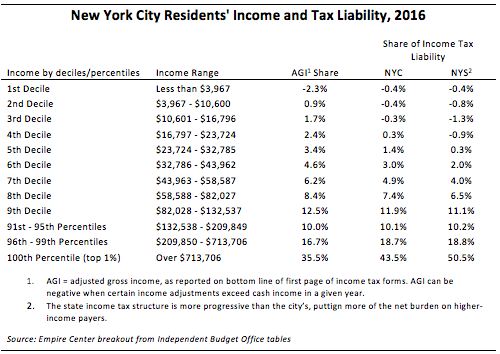 However, the IBO data for previous years dating back to 2006  also indicate that the share of city and state income taxes paid by the top 1 percent has decreased since 2007 pre-recession peak, when the top 1 percent paid 58 percent of both the city and state income tax. The high-earner share has decreased primarily because the total incomes reported by the wealthiest New Yorkers have risen at a slower rate than those of lower income groups.

In fact, as of 2016, the IBO data show the combined adjusted gross income (AGI) for New York City’s top 1 percent was down 12.5 percent from the previous year. This was the first year-to-year income decline in the top-earner category since 2013, itself an atypical year in which many wealthy households nationwide accelerated income into 2012 in anticipated of higher federal income tax rates.

Prior to that, the most recent decrease in AGI for high earners came during the Great Recession in 2007-09, when incomes within the top 1 percent plummeted nearly $54 billion, or 40 percent. As of 2016, the total AGI of the city’s top 1 percent remained $20 billion, or 15 percent, below the 2007 pre-recession peak.

As of 2016, files in the top 1 percent had average city income tax liability of $107,000, compared to a average $545 for New Yorkers whose earnings put them in the middle quintile of all city residents. Or, to look at it another way, an average high-income city resident paid  as much city income tax as 196 median-income New Yorkers.

The top of the top

In other words, if just 100 New Yorkers in this super-high income category picked up and move to another state, the income tax loss alone would come to $60 million for the city and $130 million for the state.