New York had one of the nation’s slowest-growing state economies last year, according to the latest Gross Domestic Product (GDP) estimates from the federal Bureau of Economic Analysis (BEA).

The Empire State’s real (inflation-adjusted) GDP, a key measure of economic output, rose in 2016 by just 0.8 percent, BEA data show. That was just over half the nationwide GDP growth of 1.5 percent.

New York’s 2016 GDP growth ranked 38th out of 50 states, second lowest behind Delaware in the five-state Mideast region. It was the weakest economic growth in three years, tracking a similar decline in the national GDP.

After emerging from the 2007-09 recession at a faster pace than the rest of the country—a product, in large part, of federal policies aimed at resuscitating Wall Street—the state has under-performed the national average in GDP growth every year since 2012, as illustrated by the chart below. 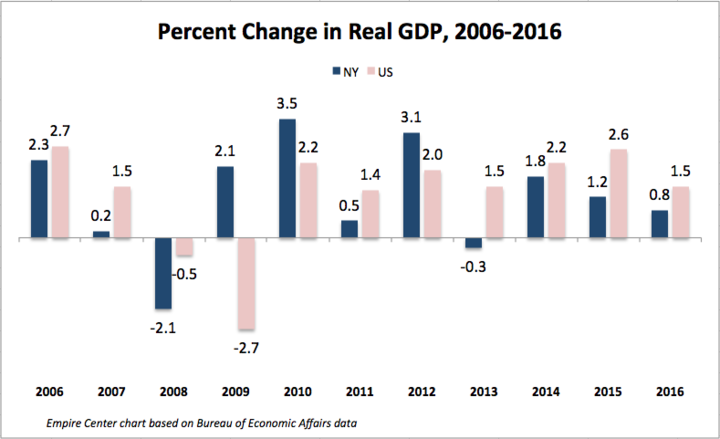 The growth hot spots in 2016 (see this BEA map) were Washington, Oregon and Utah.  Among the large states, Florida’s 3 percent GDP growth rate ranked 5th, and California’s 2.9 percent rate ranked 7th.  After growing much faster than the nation as a whole in the previous years, Texas in 2016 slowed to a GDP increase of 0.4 percent, below New York’s rate and good enough for only 40th place.

The brightest spot in New York’s economy last year was the information sector, whose output contributed 0.38 percentage points to the overall GDP rate. Other growth sectors were real estate and rental and leasing sector (which contributed 0.23 points), professional scientific and technical services (contributing 0.20 points) construction (contributing 0.11 points.)  But New York’s finance and insurance sector actually contracted by the equivalent of 0.14 percent of total state output, even as it was contributing 0.10 percent to growth nationally.

Today’s data also show that New York’s economy weakened at the end of last year. In the fourth quarter of 2016, the state’s GDP grew on annual basis by just 0.4 percent, barely one-fifth the national rate of 1.9 percent. That was only good enough for a ranking of 46th out of 50 states; only Iowa, Kansas, Louisiana and Mississippi had slower fourth quarter growth rates.

By contrast, Texas GDP growth in the fourth quarter was 3.4 percent, highest in the country. Florida remained strong with GDP growth of 3.1 percent, in 4th place, and California had growth of 2.5 percent, good enough for 7th place.

The GDP data are preliminary, subject to re-estimates. But even with these changes, the general trend in NY has not been strong relative to national numbers for several years now.