Star ratings for New York hospitals went from bad to worse in a newly updated Hospital Compare report card from the federal government.

The state’s hospitals received an average of 2.18 stars out of five, down from 2.32 as of November 2017, the last time the Centers for Medicare & Medicaid Services updated its ratings.

The Hospital for Special Surgery in Manhattan maintained its status as the only New York hospital to receive five stars, the highest rating. The most common rating was one star, which was received by 48 hospitals, or almost a third of the 151 hospitals graded, up from 33 one-star ratings in 2017.

Nationwide, the most common rating was three stars, and only 8 percent of hospitals received one star.

New York’s ranking among the states held steady at 50th out of 50, with only the District of Columbia scoring lower.

The Hospital Compare star ratings are based on dozens of measures of hospital care, including mortality data for certain procedures, infection rates, data on usage of recommended procedures and patient surveys.

The concept of grading hospitals in this way is controversial, and the industry has long disputed the methodology CMS uses to gather and crunch the numbers. One complaint is that the grading system does not adjust for social factors such as poverty and homelessness, which can result in lower grades for institutions serving lower-income populations.

CMS announced Thursday that it will consider changing its methodology in response to some of athe criticism.

That said, New York’s hospitals collectively perform poorly by other benchmarks. They have consistently ranked at or near the bottom of report cards from Consumer Reports magazine (which have been discontinued) and the Leapfrog Group, and shown some of highest readmission rates and longest lengths-of-stay in the country. 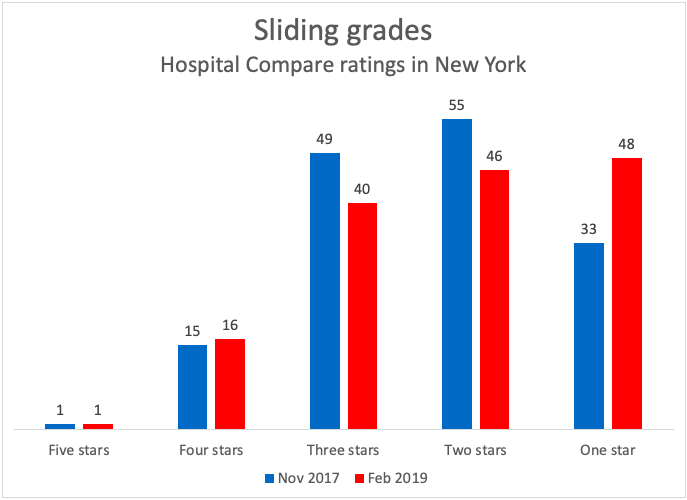 Four hospitals saw their Hospital Compare ratings drop by two stars since 2017: Geneva Hospital in Ontario County and Alice Hyde in Franklin County dropped from three stars to one, and TLC Network in Erie County and Unity Hospital of Rochester dropped from four stars to two.

A full list of Hospital Compare ratings for New York hospitals can be found here.

Star ratings for New York hospitals went from bad to worse in a newly updated Hospital Care report card from the federal government.