Today’s Albany Times Union gives front-page play to a story that has picked up surprisingly little sustained media attention since it was first reported two years ago: since 1990, New York State has ripped off the federal government for billions of dollars in overcharges of Medicaid reimbursements for the developmentally disabled — and the feds want their bucks back.

The money graf from the Albany article:

As Cuomo plans amendments to the budget he introduced Jan. 22 — a fiscal plan that includes $56 billion in expenditures for Medicaid — the state Department of Health is being pressed by federal regulators to figure out how to sustain a cut of $1.1 billion in Medicaid funding per year starting April 1 while also repaying for some of the years of excessive payments.

Meanwhile, the state has yet to win federal approval of three major waivers of federal Medicaid rules, which are required to nail down $10 billion in added federal Medicaid funding envisioned under Cuomo’s Medicaid “redesign” initiative. The Times Union story says the waivers are being “held hostage by CMS (the federal Center for Medicare and Medicaid Services) until the developmental center overcharging problem — including some payback — is settled.” Needless to say, all this spells huge potential trouble for the state’s budget.

Cuomo’s proposed fiscal 2014 financial plan, assuming no payback of the developmental center overcharge and federal approval of all proposed waivers, projects that the state-funded share of core Medicaid services (excluding the institutionalized disabled) will increase by $2.6 billion over the next four years, as depicted in the following chart from the Empire Center’s Explore the New York State Budget web app. 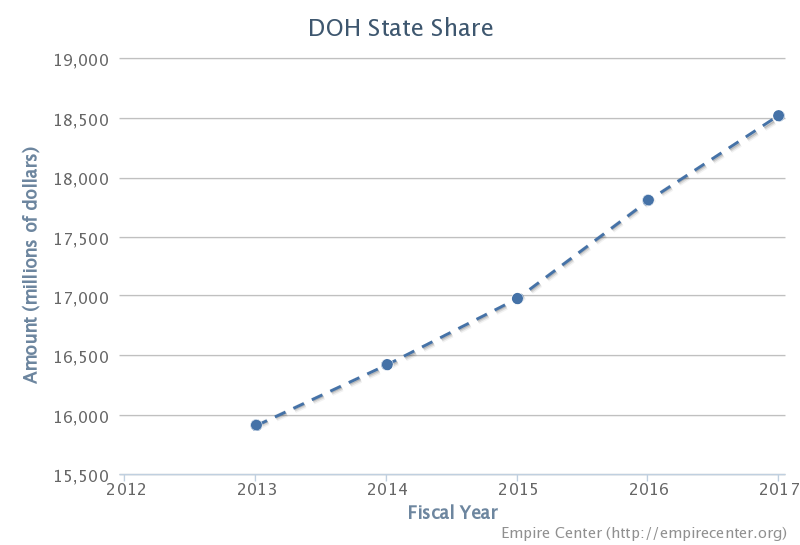 Getting real on Medicaid