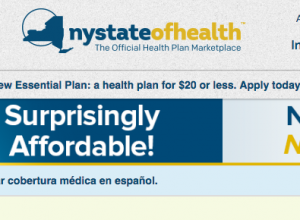 Sign-ups for both government-sponsored and private health coverage through the New York State of Health insurance exchange surged during this year’s open-enrollment period, a sign of continued consumer demand in the face of political turmoil and rising premiums.

Perhaps most surprising was the 4 percent jump in sign-ups for commercial insurance plans offered through the exchange, which came in spite of premium hikes averaging 14.5 percent. Most enrollees in these plans, known as Qualified Health Plans, qualify for tax credits that reduce their net cost, but the exchange said that 41 percent are paying full price.

Even with the uptick—the first in three years—enrollment in New York’s private exchange plans remains relatively low, largely because of competition from the low-cost, government-sponsored Essential Plan that launched in 2016.

Indeed, Essential Plan enrollment grew by 74,000, or 11 percent, compared to this time last year. Although the plan allows year-round sign-ups, about half of that growth came during the open-enrollment period that ran from November through January.

The Essential Plan is an optional benefit under the Affordable Care Act that only New York and Minnesota chose to implement. New York’s version is available to adults between 138 percent and 200 percent of the federal poverty level, and costs either $0 or $20 a month.

The federal government had been covering 95 percent of the plan’s cost. However, the Trump administration recently halted payment of a quarter of that aid, or about $1 billion a year, citing a court ruling that the funding had not been properly appropriated by Congress.

Although rapidly growing enrollment would seem to widen a hole in the program’s funding, the impact on state finances is unclear. Governor Andrew Cuomo’s proposed budget for 2018-19 acknowledges that federal funding for the program is in jeopardy and mentions strategies for closing the gap. But its numbers show the federal contribution continuing at the previous level. And its enrollment forecasts are about 50,000 lower than what was just reported by the exchange.

Also seeing rapid growth is Child Health Plus (CHP), which jumped by 75,000, or 25 percent. CHP is available to children under 19 and charges premiums on a sliding scale based on family income. With last month’s vote to extend the program for six years, New York will continue receiving federal aid to cover 88 percent of the cost.