Entering the second autumn since the COVID-19 outbreak of March 2020, the pace of New York State’s pandemic economic recovery has been abysmal by almost any standard.

New York was the national epicenter of the pandemic, and Governor Cuomo’s “New York State on PAUSE” business shutdowns and other restrictions led, in short order, to the loss of nearly 2 million jobs in the first full month after the infection began spreading in the New York City area. Economically, only the tourism-intensive states of Nevada and Hawaii experienced greater economic calamities in the early going of the public health crisis.

More recently, even when New York’s monthly economic data looked positive on the surface, there has been a more negative story to be found in the longer-term details viewed from a broader perspective.  For example, as noted here last week, while New York gained private-sector jobs at twice the national pace in August, the state remained far below the national trend of recovery to pre-pandemic employment levels.

State-by-state data estimates posted this week by the federal Bureau of Labor Statistics (BLS) further highlight New York’s poor relative performance, as illustrated by the map below. Seasonally adjusted private employment in New York as of August was still 9.8 percent below the state’s February 2020 level, compared to a net decrease of just 3.6 percent for the U.S. as a whole during the same period. This ranked next-to-last among all states; only Hawaii remains worse off, with private payrolls still 14.5 percent below the state’s pre-pandemic total.

Peeling further into the numbers, New York trails the national jobs recovery trend in every private industry for which comparable data exists, as shown below. 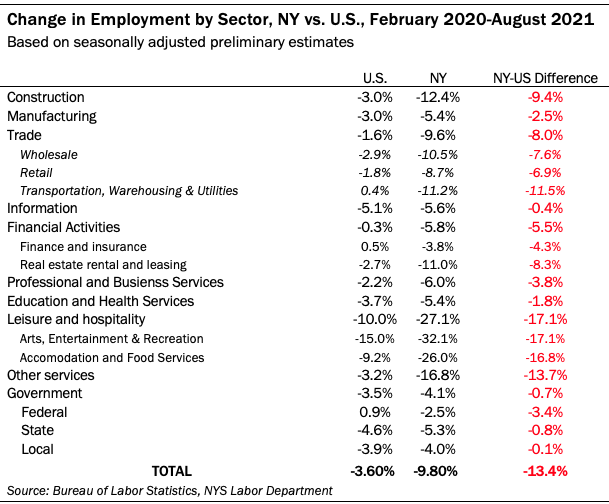 Over the last 18 months, New York came within a percentage point of the national employment trend in only one private-sector industry: information, which includes publishing, software, broadcasting and motion picture production. However, these employers account for a relatively small share of all private jobs in the state (just 3.7 percent as of August).

The components of the unemployment statistic revealed another troubling trend: the number of New Yorkers in the labor force declined, as did the labor force participation rate. In two words: not good.

Personal income data released today by the federal Bureau of Economic Affairs look more positive on the surface: at a seasonally adjusted annual rate, the total personal income of Empire State residents was down 18.6 percent in the second quarter of this year, one of the smallest decreases of any state during a period when income nationally was down nearly 22 percent, reflecting the expiration of temporary federal unemployment and other benefits for individuals most affected by the pandemic recession.

However, the data also show that, through the second quarter, New York’s economy remained much more dependent on “transfer payments,” including federal and state unemployment benefits. New Yorkers’ earnings from work were up just 6.5 percent, lower than all but seven states, during a period when earnings nationally rose nearly 11 percent.