Taxpayers from around the state held a small but boisterous rally in Albany today to show support for Governor Cuomo’s proposed 2% property tax cap, which has been passed in the state Senate but is stalled in the Assembly. 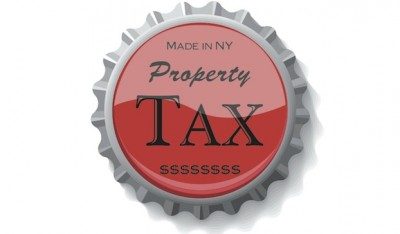 Organizations from Long Island, the Mid-Hudson, Western New York and the Capital Region brought more than 50 people to the central “well” of the Legislative Office Building to hear from speakers including Assembly Minority Leader Brian Kolb and Senator John Flanagan.

Attempting to shout them down was a larger contingent of cap opponents that appeared to consist mainly of New York State United Teacher (NYSUT) members, who lined the stairwells overlooking the pro-cap rally.  (Early coverage here and here.)  Their favorite chant: “Tax the rich” — an idea Nicole covered in this space last week.

While lower property taxes would create a more competitive economy, NYSUT’s frequent picketing and lobbying during the school week indicates the union has a job-creation strategy of its own — for substitute teachers, that is.

For more on the need for tax relief, see our recent report, “The Case for a Cap.”