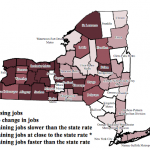 The largest upstate New York metro areas had weak or declining private job numbers in October, and the state as a whole trailed the national employment trend, according to the latest year-over-year data from the state Labor Department.

New York’s statewide private-sector employment count in October was up 98,200 jobs from the same month a year earlier—a growth rate of 1.2 percent. During the same period, the private job count nationally rose 1.7 percent.

As usual, the state’s strongest private-sector employment growth was concentrated in New York City (up 66,300 jobs, or 1.7 percent), while the surrounding downstate suburban areas all had growth rates of 1 percent or less, today’s monthly jobs report said.

Buffalo and Rochester lost 3,400 and 3,200 private jobs, respectively, for year-to-year declines of 0.7 percent in both cases. Albany-Schenectady-Troy and Syracuse had tepid growth rates of 0.4 and 0.8 percent, respectively. In the sagging Southern Tier, Binghamton was barely holding its own with a growth rate of 0.2 percent, while private employment in Elmira declined by 1.9 percent.

Growth above the state average was estimated only for the relatively tiny upstate regions of Glens Falls, Ithaca, Kingston and Watertown-Ft. Drum. 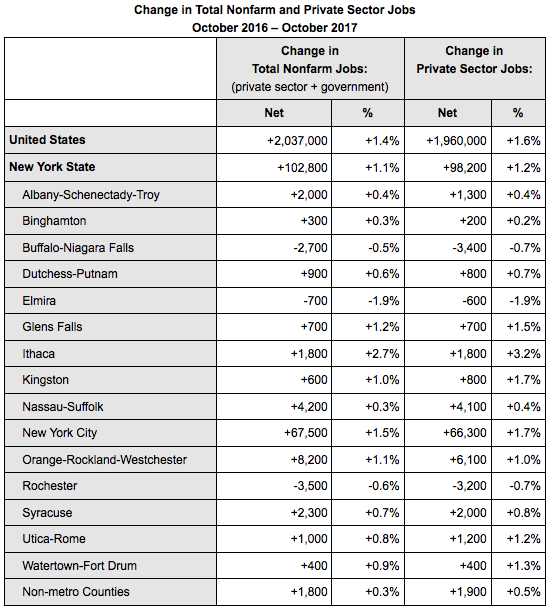