In a further sign of the Empire State’s weak recovery from the pandemic-induced recession of 2020, personal income in New York bounced back more slowly than the national average during the first quarter of this year, according to data released today by the Bureau of Economic Analysis (BEA).

On an annualized basis (i.e., the rate of change that would have occurred had the pattern been repeated over four quarters), personal income in New York from January through March was up 51.9 percent from the ultra-low level reflecting the state’s broad economic and social shutdown starting a year earlier, the BEA estimated. By comparison, the 50-state change in personal income in the first quarter was 59.7 percent.

In both cases, nearly all of the income gain (91 percent in New York; 93 percent nationally) was categorized as transfer receipts to individuals, reflecting “new government pandemic relief payments provided by the [federal] Coronavirus Response and Relief Supplemental Appropriations (CRRSA) Act and the American Rescue Plan Act,” the BEA noted. The rest of the increase would have flowed through personal earnings from employment, dividends, interest and rent.

In 50-state rankings of first-quarter income growth, New York ranked a mediocre 42nd, as illustrated below. 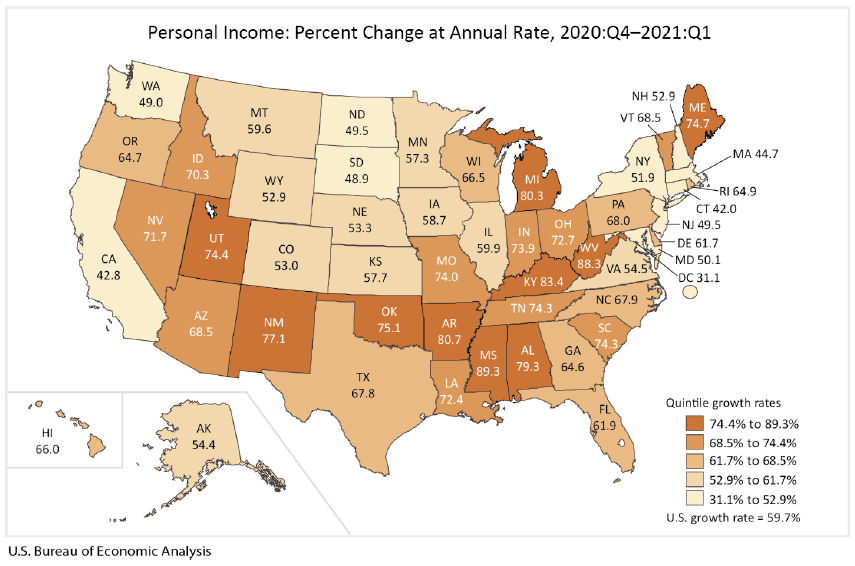 Last week, the state Labor Department released data showing the state’s recovery of private-sector payroll jobs as of May was also far behind the national average, increasing at a pace that won’t produce a full jobs recovery (to February 2020 level) until 2025.