Nearing the end of the COVID-19 era’s second year, New York remained more than a quarter-million private jobs below its February 2020 peak level—while employment nationally climbed to new highs, according to monthly reports from the state Labor Department and federal Bureau of Labor Statistics.

On a seasonally adjusted basis, November private employment in the Empire State was still 3.1 percent below the pre-pandemic level. Only Hawaii (-6.8 percent) and Vermont (-4.5 percent) still had more ground to make up — even as 30 states had surpassed their pre-pandemic job counts. Among New York’s populous peer states, both Florida and Texas were a robust 6.5 percent above their pre-pandemic private employment levels. California’s private job count was up 1 percent, roughly equaling the national average, despite having quashed economic activity with broad COVID-19 lockdowns similar to New York’s during the first year of the pandemic.

New York’s statewide total of 8.1 million jobs in November had risen to the mid-2017 level, still 261,000 short of its February 2020 peak. As shown below, New York has now regained more than 86 percent of the nearly 2 million private-sector jobs it lost in the immediate aftermath of the March 2020 Covid-19 outbreak and lockdowns. Even counting New York’s loss, employment in the U.S. as a whole has risen to 1.5 million jobs above the pre-pandemic total. At its latest monthly growth rate, private employment in New York is on track to fully recover to its pre-pandemic level at the end of 2023.

Measured on a year-over-year basis, non-seasonally adjusted private employment in New York was up 3.6 percent, essentially matching the national growth rate from November 2021 to November 2022. As shown below in the screen-grabbed table from the Labor Department’s monthly report, 70 percent of the state’s job gains were concentrated in the New York City area. Across upstate New York, only the Syracuse labor market kept pace with the statewide gain during the period. 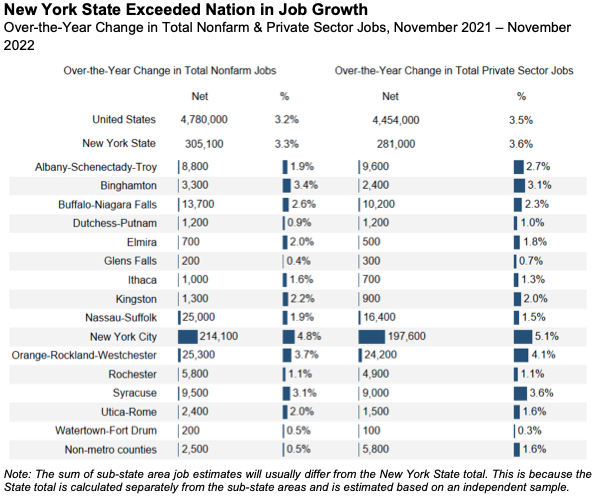