The cost to taxpayers of New York’s generous (and constitutionally guaranteed) pension benefits for state and local government employees depends largely on the performance of pension fund investments. So when Comptroller Thomas DiNapoli announced recently that the state Common Retirement Fund had earned a record return of 33.55 percent last year—nearly five times the assumed rate—it was a clear sign that taxpayers will be saving money in the near future, right?

Well, no—not necessarily. For one thing, as retail investors are regularly warned, past performance is no guarantee of future results. And in the case of the Common Retirement Fund—which underwrites the New York State and Local Retirement System (NYSLRS), to which most state and local employees outside New York City belong—past patterns suggest future results won’t be so hot.

The chart below depicts the highly volatile pattern of state pension fund returns over the past 24 years, starting near the peak of the 1990s bull market, compared to the Common Retirement Fund’s assumed rate of return throughout the period. The Common Retirement Fund’s down-and-up performance over the past two years was the unique product of the pandemic and federal policy responses to it. As measured by the S&P 500, domestic stock prices peaked in mid-February, then nose-dived by more than 30 percent by the end of March as COVID-19 spread across the world, turning what looked like an above-par gain into a 2.7 percent loss for the Common Retirement Fund in FY 2020. But over the next several months, spurred by Federal Reserve policies that drove market interest rates down near zero while offering bailouts of troubled corporate debts, the markets rebounded sharply, recovering all those losses and then some. 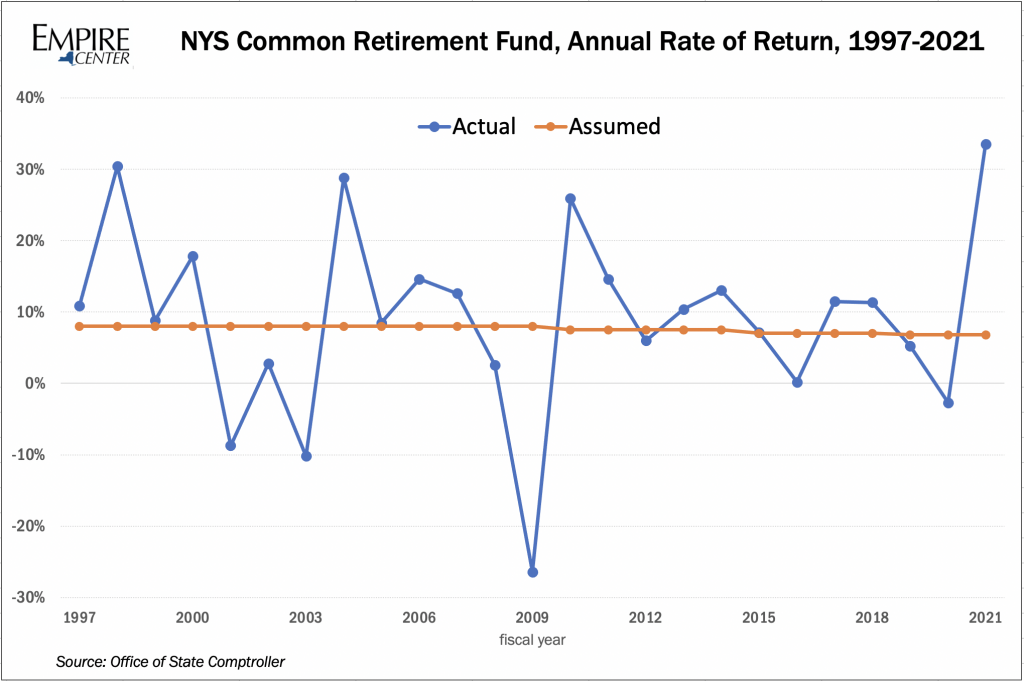 The Common Retirement Fund’s previous record return was set in 1998, when it earned 30.4 percent. It came close to equaling that performance in 2004, when it returned 28.8 percent. But in the five years immediately following those big gains, the fund earned annual average returns of 1.6 percent and 1.1 percent respectively.

The fund’s assumed rate of return was a highly optimistic 8 percent before DiNapoli began a series of prudent reductions—to 7.5 percent in 2010, 7.25 percent in 2015, and 6.8 percent last year. Even at 6.8 percent, the rate of return that the pension fund literally counts on is considerably higher than the yields from low-risk U.S. Treasury or high-quality corporate bonds, which currently range from 2.3 percent to 3.3 percent.

DiNapoli has never been willing to project future employer pension contributions more than one year into the future, but the governor’s Division of the Budget is less shy about doing so. And prior to this year’s record investment return, DOB had been forecasting—in both the Executive Budget and Enacted budget Financial plans—that tax-funded employer contribution rates would rise to their highest levels in more than 50 years, as illustrated below. 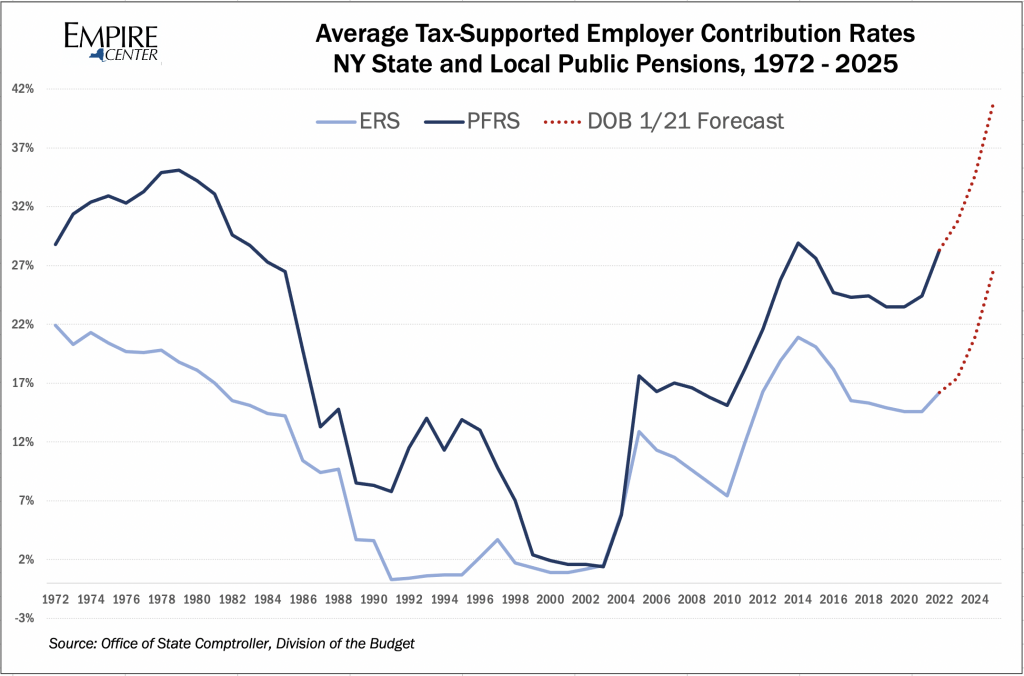 The Enacted Financial Plan for FY 2021-22 says DOB expects contribution rates to increase because the assumed rate of return has been reduced, and because the pension fund’s actuary has shifted to a new “mortality table” indicating that pension recipients are living longer and thus will cost more. Without offering specifics, DOB also says it forecasts “a lower rate of return compared to the current assumed [6.8 percent] rate of return by NYSLRS.”

Employer contribution rates most recently had been pegged by the comptroller at 28.3 percent of total salaries for members of the Police and Fire Retirement System, or PFRS, and 16.2 percent of salaries for all other types of state and local workers, who belong to the Employee Retirement System, or ERS. DOB was forecasting that those rates would shoot up in three years to nearly 41 percent for PFRS members and 26.4 percent for ERS members. Based on that, DOB also forecast that the state government’s pension contribution alone will rise from $2.26 billion in FY 2022 to $3.55 billion in 2025. Applying the same higher rates to total reported 2020 salaries of all other government employers in the NYSLRS, local government pension costs would increase during the same period by a total of $2.5 billion.

However, the DOB projection did not assume the 33.55 percent record return announced by DiNapoli shortly after the financial plan was released. This would surely reduce its projected increase in pension costs—but as explained above, not necessarily by all that much. As long as Comptroller DiNapoli sticks with appropriately prudent actuarial assumptions, pension costs over the next few years won’t be going down, and quite possibly will be going up. The only question is by how much.