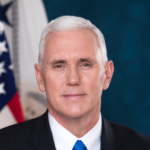 Vice President Pence was in the Buffalo area today, touting the Trump administration’s federal tax reform plan as a potential economic boon for the region and the nation.

While key details remain unclear, the most problematic piece of the Trump-congressional Republican tax “framework” unveiled last month involves the repeal of the State and Local Tax (SALT) deduction.

A full transcript of his remarks was not immediately available, but Pence could be expected to assert that, for most middle-class residents of western New York, the loss of the SALT deduction will be offset by a doubling of the standard deduction. This theme was first sounded by U.S. Rep. Chris Collins, R-Williamsville, soon after the tax plan’s release last month:

“I bet you 98 percent of the people in my district are gonna take the standard deduction,” Collins said. “So they’re not gonna lose anything.”

Collins added that the tax plan, which Trump touted on the road at a rally in Indiana Wednesday afternoon, is “so good on every front” that the state and local tax deductions was a concession he is willing to make.

“So I like what I see,” Collins said. “I would, like everyone else, I’d rather see the state income tax and property tax staying in, but if 97 or 98 percent of New Yorkers are gonna take the standard deduction, it does not become a big deal.”

If “losing” is defined as paying higher taxes, then Collins is probably correct—although we can’t know for sure. That’s because crucial details, such as the income thresholds for new tax brackets, have yet to be released.

But this much seems clear: even if they end up pocketing a net tax cut, Collins’ currently itemizing middle-class constituents are still likely to end up paying at least slightly higher federal taxes than average American itemizers in the same income brackets.

To understand why, consider the following table breaking down values for itemizers in what could be considered the core middle class by broad national and upstate New York standards. 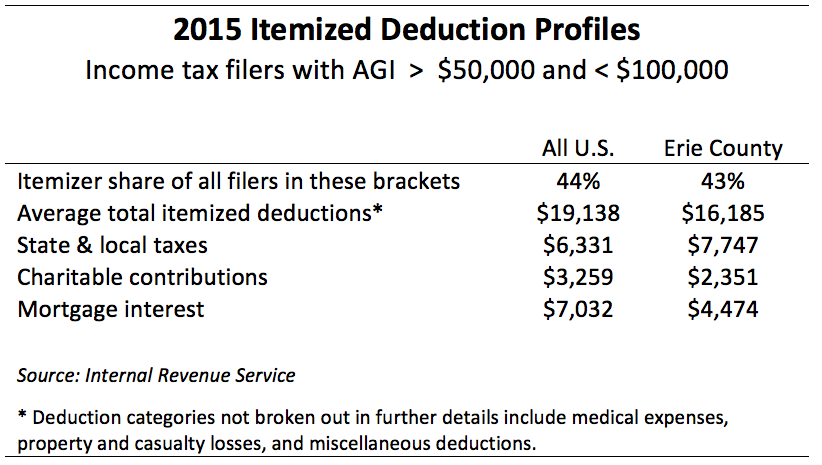 As shown, Erie County residents in these income brackets itemize at roughly the national average rate. But while they unsurprisingly claim a higher average SALT deduction, the total deductions of Erie County residents are lower. In particular, the Erie County filers itemize significantly smaller deductions for mortgage interest and for charitable contributions. The former probably reflects Erie’s relatively low house prices; the latter suggests that New York’s higher state and local taxes are eating up money that might otherwise be given to charity.

In both cases, the remaining itemized deductions, including items such as medical expenses and miscellaneous items as well as SALT, would disappear under the Republican plan. Therefore, all else being equal in terms of income and family size, the higher standard deduction—$24,000 as opposed to the current $12,000 for married couples—is thus worth a little less to Erie County families who now itemize, as compared to the national average.

Meanwhile, Governor Cuomo continues to jump into the tax reform debate with heated rhetoric and misleading numbers. In a public appearance today, he once again denounced the repeal of SALT deduction as “double taxation.” Yet the state itself practices double taxation in a number  of instances: for example, it doesn’t allow a state income tax deduction for New York City income taxes.

If Cuomo hopes to see even a portion of the SALT deduction preserved, at this point he’d be better off saying nothing.