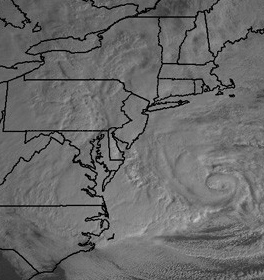 “Frankenstorm” could easily inundate the tenuously balanced budgets of New York State, New York City and countless other localities in the storm’s path.

Last week, just as forecasters were beginning to warn that Hurricane Sandy would have a big impact on New York, Comptroller Thomas DiNapoli released a mid-year revenue analysis showing that state government tax collections through the first half of the fiscal year were $213 million below the updated July projections–which, in turn, were $223 below the projections at the time the budget was enacted in March.  ”Collections would have to grow 6.4 percent for the remainder of the year to make up for the lower-than-expected revenue thus far,” DiNapoli said.

New York City’s tax revenues as of August were coming in just above target — which is not necessarily consoling, since the city Office of Management and Budget makes a practice of significantly under-estimating revenues, and collections were actually slightly below target for everything but the property tax.  Meanwhile, as usual, the Nassau County budget has little margin for error.

Of course, none of those financial plans envisioned a fresh natural disaster in the final quarter of calendar year 2013, so their potential deficits will now get worse. And so will the fiscal outlook for already fiscally vulnerable places including Suffolk County (with more miles of exposed shoreline than anyplace other than New York City), the city Yonkers (whose newly redeveloped Hudson River waterfront could be flooded) and the already-drowning-in-red-ink city of Long Beach (a vulnerable barrier island), among other places.  The direct and indirect costs of Hurricane Sandy should easily outstrip those of Hurricane Irene, which devastated some wide but thinly populated swaths of upstate New York just over a year ago.

Sandy will hammer state and local finances in three ways: loss of tax revenues due to economic disruption, increased operating costs for overtime and cleanup, and higher capital costs to repair damage to physical infrastructure. Under the worst-case scenario, including a partial flooding of New York’s subway tunnels after a predicted storm surge of 11.7 feet above normal high tide, the economic disruption and its resulting costs to the state and surrounding region will be especially severe.

Contemplating the impact from a national perspective, economists at Moody’s Investor Service reportedly were looking on the bright side:

“While natural disasters take a large initial toll on the economy,” Moody’s Ryan Sweetsaid on the firm’s economy.com web site, “they usually generate some extra activity afterward. We expect any lost output this week from Hurricane Sandy will be made up in subsequent weeks, minimizing the effect on fourth quarter GDP.”

If you find solace in that kind of thinking, you need to re-read your Bastiat. For the economy as a whole, there is no net profit in destruction, no matter how much rebuilding activity it engenders.