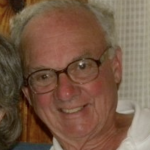 Sheridan C. Biggs was a no-nonsense numbers guy—a Price Waterhouse partner during much of that firm’s “Big Eight” heyday, from the early 1960s through the early ’90s. He had exceptionally broad and deep knowledge of business in a truly global sense, having traveled extensively in three decades at the accounting and consulting firm, where (among other things) he had overall responsibility for the firm’s Japanese business services. He would later share that knowledge with future business leaders as the executive-in-residence at the Graduate Management Institute of Union College.

At heart, Sherry Biggs always remained a proud New Yorker. Born in Schenectady, he lived for many years in Westchester County and ultimately retired to the farm he shared with his wife, Susan, near the rural hamlet of Quaker Street in western Schenectady County. (Indeed, not long before his death Sunday at the age of 83, he was still able to enjoy his favorite pastime—riding his tractor, clearing brush at the farm.)

As he recalled a few years ago:

When I was very young, my mother told me of the greatness of our state, New York; we were tops. As I look around now I ask myself, “What happened and why?” That is my present and most compelling interest along with education and public economics.

Sherry’s deep interest in public issues ultimately led him to involvement in the Empire Center, starting when it was still a subsidiary research project of the Manhattan Institute.  When the time came to launch the Empire Center for Public Policy, Inc., as an independent, nonprofit think tank in 2013, Sherry naturally was one of the first people we turned to for help.

For any nonprofit start-up—but especially for one seeking tax-deductible status under Section 501(c)3 of the Internal Revenue Code—the board chairmanship is crucial. Sherry readily accepted and performed masterfully in that role, reviewing reams of government filings and organizational documents with the sharp eye of a seasoned certified public accountant, running board meetings with a light touch, asking good questions, and always encouraging us to forge ahead.

The Empire Center couldn’t have asked for a better founding chairman, and when Sherry stepped down from that role in 2015, we were delighted to have him stay on as chairman emeritus.

Beneath a gruff exterior, Sherry was warm, friendly, a great storyteller—and thoroughly idealistic. He was deeply committed to his family (including, in addition to his wife, three surviving adult children, four grandchildren, and two step-children), to his faith (he was an active member of the Episcopal Church, and served as a director of the Church Pension Fund) and to his country (which he served as a U.S. Navy officer).

The Empire Center is in the business of trying to convince people that, to flourish again, New York State needs better public policies.

It would help if there were more New Yorkers like Sheridan Biggs.

I know I speak for everyone involved with the Empire Center when I say we are deeply grateful for Sherry’s supportive leadership in our formative years.

May he rest in peace.