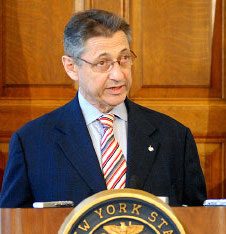 If Sheldon Silver remains a rank-and-file legislator rather than retiring after stepping down as Assembly speaker, he will be losing money on the deal, according to the Empire Center’s pension calculator.

Based on his 38 years as a state assemblyman and the speaker’s salary of $121,000, Silver is now eligible for a pension of $87,120 — $7,620 more than the base pay he will collect as a mere Assembly member with no leadership title. As the calculator shows, Silver’s pension benefit has a net present value of $1.15 million, meaning a 70-year-old man in the private sector would need that much to purchase an annuity yielding the same annual income.

But Silver’s pensionable “service credits” may add to that amount. If he was enrolled as a full-time member of the New York City pension system when he began working as a Civil Court clerk in 1971, he could have  Tier 1 status, boosting his benefit to as much as $95,590.

[UPDATE, 12/2/15: Teri Weaver of the Post-Standard reports that Silver had 44 years of service credit. This entitles him to an annual pension payment of $98,010, according to the Empire Center’s pension calculator.].

[CORRECTION, 12/9:Based on information provided by the comptroller’s office, Silver belonged to a class of Tier 1 members whose pensions are capped at 79 percent of final average salary. This would equate to a maximum benefit of $95,590 a year].

Both of these figures assume Silver chooses the “single life option” and doesn’t owe the system money for loans against his pension.

Under current state law, Silver can continue to collect his pension even if he is convicted on the charges filed against him by federal prosecutors last week.