New York’s employment recovery slowed to a near halt in the crucial month of September, falling further behind the national growth rate in the 18th full month since the pandemic hit in March 2020, according to state and federal monthly job reports.

On a seasonally adjusted basis, private-sector employment in New York grew in September by 0.2 percent, or 14,800 jobs, compared to 0.25 percent for the nation as a whole. In addition, however, the Labor Department’s strong initial estimate of August employment growth in the state (28,000 jobs, or about 0.4 percent) was reduced by more than 9,000 jobs.

At September’s monthly growth rates, the nation will surpass pre-pandemic employment levels in October 2022, while New York won’t fully recover until the end of 2025. The comparative trends since 2010 are illustrated below; note that New York employment growth actually had begun to fall behind the national average in 2019, a few months before the COVID-19 health crisis hit.

The state of the states

Measuring from February 2020, the month before the pandemic’s onset, private employment in New York was still down 9.7 percent in September, while the national total was back within 3.2 percent of the pre-pandemic level. As shown by the map below, only tourism-intensive Hawaii exceeds New York’s pandemic-driven jobs deficit.

Hurricane-wracked Louisiana was the only other state whose seasonally adjusted September private payroll total was more than 9 percent lower than in February 2020. Closer to home, private payrolls in New York’s neighboring states ranged from 5.5 percent (Vermont) to 6 percent (Massachusetts) below pre-pandemic levels; even California, where business and social restrictions came closer to matching New York’s, was just 5.6 percent below peak pre-pandemic employment.

On the other extreme, two states known for their less restrictive responses to the novel coronavirus, Texas and Florida, led the nation with employment gains of 1 percent and 0.8 percent, respectively, last month; Texas as of September was within a percentage point of its pre-pandemic employment level, and Florida was within three percentage points.

Measured on a year-to-year basis, September private employment in New York (up 3.7 percent) increased a full percentage point more slowly the national average (up 3.7 percent), as shown below. New York City matched the national average, and both the Buffalo and Rochester areas managed to exceed it, job gains were below the state average in Albany-Schenectady-Troy and Long Island (up just 0.8 percent), and employment was down slightly during the period in both Elmira and the Duchess-Putnam areas. 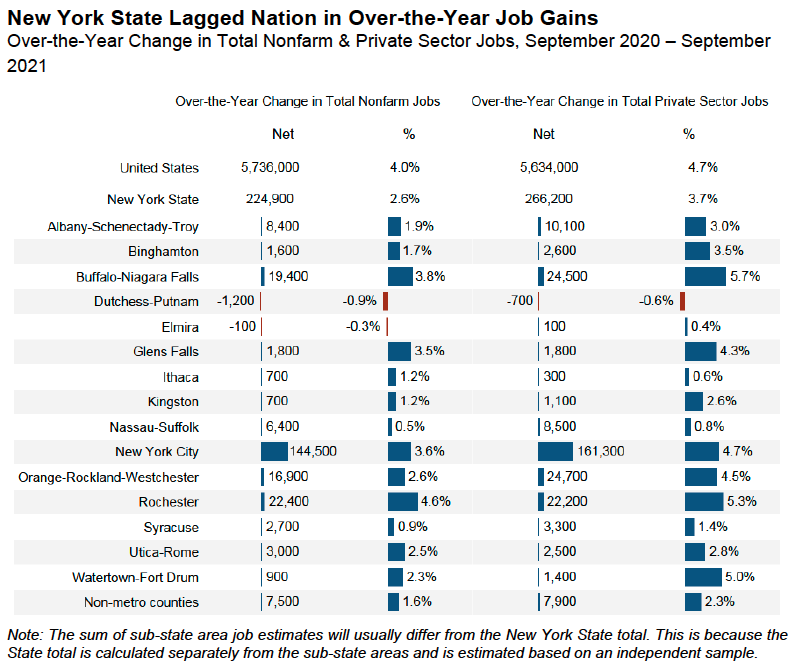 As noted in the state’s monthly report, the number of private sector jobs in New York is based on a payroll survey of 18,000 New York businesses conducted by the U.S. Department of Labor’s Bureau of Labor Statistics (BLS). The estimates are preliminary and subject to revision as more complete data become available the following month, and are “benchmarked” every March against a much larger universe of employer unemployment insurance filings.

According to separate data from the smaller Current Population Survey, New York State’s seasonally adjusted unemployment rate fell 7.4 percent to 7.1 percent in September. But this was due mainly to a further drop in the number of state residents seeking jobs, not to increases in employment.