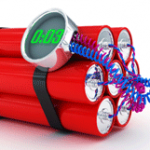 On the heels of a strong investment return in 2017, Comptroller Thomas DiNapoli just announced a slight reduction in taxpayer-funded pension rates for the state and its local governments.

For 2018-19 fiscal years, DiNapoli said, the estimated average contribution rate for the members of the Police and Fire Retirement System will decrease from 24.4 percent to 23.5 percent of covered payroll, and rates for the more numerous (but less highly paid) Employee Retirement System members will drop from 15.3 percent to 14.9 percent of payroll.  The PFRS and ERS are part of the New York State and Local Retirement System (NYSLRS), which in turn is fed by the comptroller’s Common Retirement Fund.

DioNapoli had previously announced the Common Retirement Fund’s fiscal 2017 investments earnings of more than 11 percent, which easily exceeded the 7 percent rate of return assumption on which the pension system bases its billings.

But, as usual, good news from the state pension system masks an underlying problem.

The latest Actuary’s Annual Report the Comptroller shows that, even measured by (permissive) government accounting standards, the Empire State’s largest public pension plan still has not fully recovered from the financial crisis and Great Recession of 2008-09.

NYSLRS ended its 2017 fiscal year with a long-term funding shortfall (i.e., liabilities minus assets) of $11.6 billion to $12.1 billion, depending on which actuarial method is used to calculate the difference between pension assets and liabilities.  Those numbers translate into funded ratios of 94.2 to 94.5 percent, respectively. As recently as 2008, they stood over 100— although the methodology in both cases is overly optimistic, since it calculates long-term liabilities using an optimistic discount rate of 7 percent.

DiNapoli can boast—accurately—that NYSLRS has one of the highest funded ratios in the nation. However, using a more realistic discount rate required of corporate pension funds and recommended by most private-sector actuaries, economists and financial analysts, the pension system’s shortfall would be much larger and its funded ratio much lower.

In the last five years, the pension fund’s compound annual rate of return has averaged 8.4 percent, which is why the slight reduction in contribution rates is possible. But narrowing the focus to the last three years, even including that strong return in fiscal 2017, the annual rate has averaged 6.2 percent.  In the last 10 years, it’s averaged 5.7 percent.

From a historical perspective, this chart from the actuary’s report is instructive. 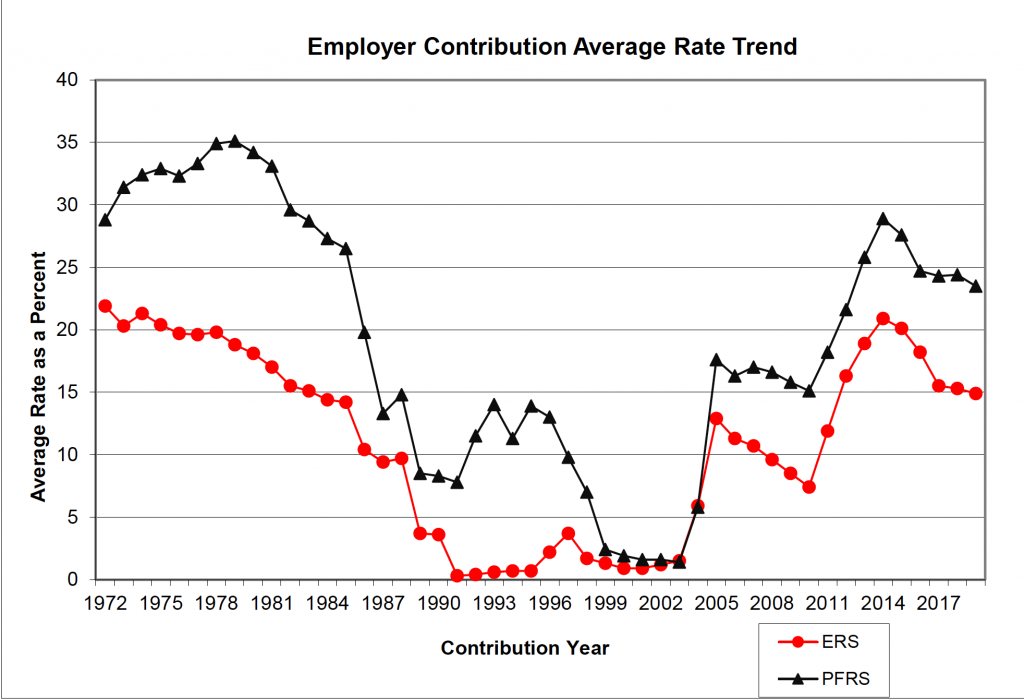 As shown, even after dips from their 2013 peaks, tax-funded contribution rates as a share of total salaries for NYSLRS members are considerably higher than they were from the mid 1980s into the early 2000s.   For roughly 20 years, local governments across the state negotiated pay levels and raises premised on a continuation of much lower pension costs than those we’ve seen since 2009.

The difference between the new normal and the 1980s is that, in the earlier period, pension funds were invested more heavily in less volatile, more predictable low-risk assets such as bonds. The decline in rates in the early 1980s occurred as the pension funds were shifting more money into a then-booming stock market.