Governor Hochul’s FY 2023 Executive Budget, when released in January, projected that the net capital gains of New York tax filers would reach nearly 18 percent of total adjusted gross income in the state’s personal income tax base for 2022. That would amount to an all-time high, eclipsing the 16 percent capital gains share of the tax base in 2007—just before the financial crisis and Great Recession.

Including this year’s budget estimate and outlook, the long-term trend is illustrated below. 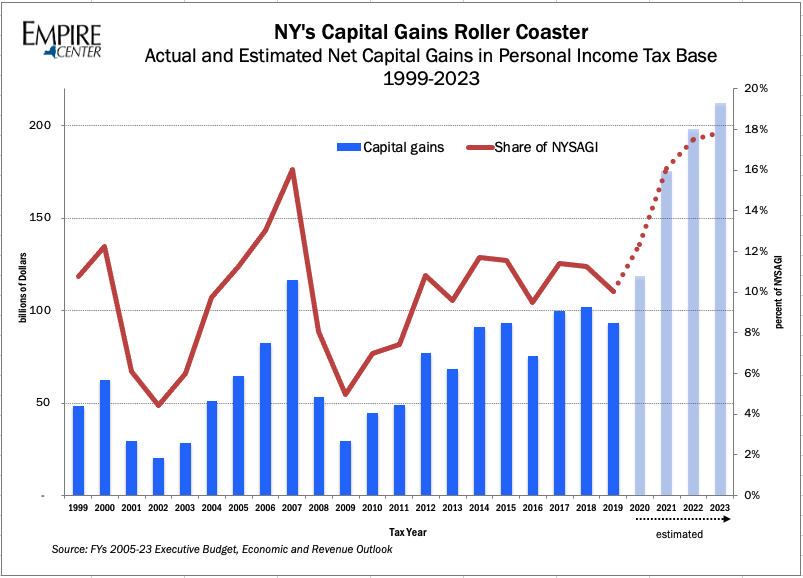 Capital gains income is strongly correlated with stock prices, and the Executive Budget forecast the S&P 500 would rise by 7.4 percent this year, on the heels of a nearly 30 percent increase in bullish 2021. Instead, with some ups and downs, the major stock indexes have all declined in 2022; as of the market’s close today, the S&P 500 had sunk by a net 17 percent since the start of the year. Fulfilling the budget forecast would require the S&P to surge by 28 percent between now and the end of the year. Anything is possible, but this would be highly unlikely.

The capital gains share of total income tax receipts in all likelihood exceeds the category’s share of total income, because more than 80 percent of the net dollar gains flow to New York residents with incomes of $1 million or more, who are in the highest tax brackets. These households, in turn, constitute most of the state’s highest-earning 1 percent of residents, who generate more than 40 percent of total state income taxes. So, based on the historic relationship between capital gains and stock prices, state income tax revenues could fall at least $2 billion below Hochul’s FY 2023 budget forecast if the S&P is flat for the rest of the year.

As measured by the Internal Revenue Service, the capital gains share of total federal adjusted gross income is larger in New York than in any state, and more disproportionately concentrated among income millionaires than in any state except California. As of 2020, the securities industry accounted for nearly 7 percent of New York’s economic output—six times the US average. The broader finance, insurance and real estate sector generated roughly 13 percent of New Yorkers’ personal income, more than 2.5 times the national average.

Bonuses for bankers at big financial firms—which hit record highs in 2021 amid a rash of big deals and a dire talent shortage on Wall Street—are expected to drop as much as 40% in 2022 as bank profits plummet, according to new data from compensation consulting firm Johnson Associates.

Investment banking underwriters—who got the biggest bump in 2021 with bonuses surging 35% amid a jump in mergers and acquisitions—will see the biggest drop this year as dealmaking slows. Johnson associates projects bank underwriters will see bonuses slump 35% to 40%—essentially taking bonuses to 2020 levels.

The volatility of New York’s tax base is a feature of Albany’s heavier-than-ever reliance on its wealthiest individual investors and highest-earning households—whose effective state income tax rates (net of federal deductibility) were raised to record-high levels by the state’s FY 2022 budget.

As the old saying goes, for the nation as a whole, the stock market is not synonymous with the economy—but in New York, to an increasing degree, it’s a state government financial barometer not to be ignored.