The budget is a mid-2020s fiscal disaster in the making: an incomplete bridge over a deepening river of red ink.

Depending on timing and size of some large but (so far) temporary spending commitments, apparently funded largely or entirely by one-shot stimulus aid from Washington, the budget’s short-term federal cash surplus could mask underlying structural gaps ranging from $5 billion to more than $10 billion. Under Albany’s incredibly opaque budgeting process, crucial financial plan details needed to form a clearer picture of future budget challenges won’t emerge from the governor’s Division of the Budget (DOB) for another month.

All we know for sure is that the nearly all-embracing All Funds budgetary spending measure is officially pegged at $212 billion, giving New York the nation’s second largest budget after California, whose population is twice as large. The State Operating Funds budget comes to $111 billion (according to Cuomo), which is an increase of 9 to 10 percent over last year. This measure is the crucial one; while it apparently (atypically) includes at least $5.5 billion of the state’s $12.6 billion in unrestricted stimulus aid, State Operating Funds is also the category that in the long term needs to be paid for with the state’s recurring revenues, which are billions of dollars lower than the spending total.

In the meantime, the very long list of negatives in the new budget begins with the revenue bill and personal income tax (PIT) hikes adding from 9 percent to as much as 24 percent to the state tax burden on New York’s highest earners—whose incomes are subject to volatile financial market swings, and who already pay a disproportionately large share of state income taxes. Extending a little-known but pernicious quirk of New York’s tax law, the new top rates are not “marginal” but will apply as flat rates to all the taxable income of filers earning more than a narrow range above the tax table bracket thresholds—so the total tax increases are even higher than they look. 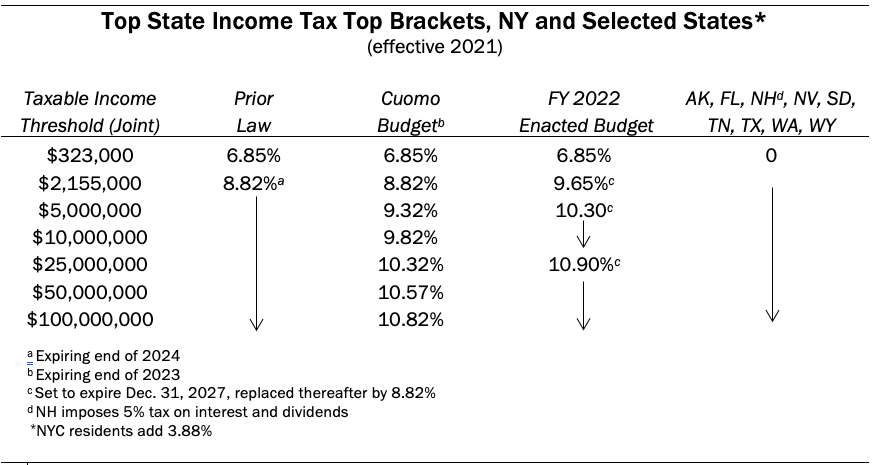 Although it was Cuomo who first proposed a PIT increase on high earners for fiscal 2022, the adopted tax package is an enormous concession to his fellow Democrats in the Legislature—especially considering that the added revenue wasn’t even needed to balance the budget in the first place.

Cuomo also agreed to a supposedly temporary (and also unnecessary) three-year increase in the corporate franchise tax rate, to 7.25 percent on profits above $5 million. The 2014 law reducing the corporate tax rate to 6.5 percent—the middle of the 50-state pack—was understandably trumpeted by Cuomo as a signature accomplishment; his acceptance of a corporate tax hike now, even on a temporary basis, underscores the degree to which his budget bargaining leverage has been weakened by scandals that have led to probes by federal prosecutors, the state attorney general, and a state Assembly committee assigned to consider impeaching him.

The latest personal income tax hikes are scheduled to expire on the more distant (and unlikely) date of Dec. 31, 2027. However, the same revenue bill also covertly erases the expiration date on the previous 8.82 percent millionaire tax rate—a step Cuomo never previously had endorsed.

The millionaire tax originated (at the 8.97 percent level) as a 2009 fiscal emergency measure under Governor David Paterson, adding to the 6.85 percent maximum PIT rate established under Governor George Pataki 1997. Pataki’s top rate, in turn, was not far below the 7 percent top-rate goal of a tax reform measure signed by Governor Mario Cuomo a decade earlier, after the 1986 federal tax reform law had eliminated many previous tax loopholes and broadened the amount of income subject to tax.

After pledging not to extend Paterson’s millionaire tax past its original scheduled expiration at the end of 2011, the current Governor Cuomo reversed his position, used the resulting $4 billion or so in revenue to cut some other taxes, and in subsequent years signed three more extensions of the higher tax, most recently pushing it out to 2024.

By eliminating the sunset date on the previously temporary 8.82 percent millionaire tax rate, the budget imposes New York’s first permanent income tax rate increase since the late 1960s, at the peak of the Rockefeller era.

For residents of New York City, where the state’s highest earners live, the combined state-local rate will now range from 13.5 percent to nearly 15 percent—above California’s 13.3 percent, which previously was the nation’s highest income tax rate. (Pandemic-ravaged Hawaii is reportedly about to increase its top rate to 16 percent.)

Cuomo today sought to minimize the impact of the tax increases by predicting that Congress and the Biden administration will soon repeal the cap on state and local tax (SALT) deductions. Senate Majority Leader Charles Schumer and House Speaker Nancy Pelosi have endorsed SALT cap repeal, but Cuomo claimed they had “promised” to restore full SALT deductibility–which is not the same thing by any stretch. SALT was a tax break that principally helps high earners in the high-tax, heavily Democratic states of New York, California, New Jersey, and Connecticut, which is why Republicans chose it as the funding mechanism for middle-class income tax cuts in the 2017 Tax Cuts and Jobs Act.

Restoring SALT could only be paid for with much larger federal tax hikes than Biden has proposed, and such increases could run into resistance from moderate members of the Democrats’ narrow congressional majorities. Even if SALT is restored to pre-2018 levels, coupled with Biden’s most recent proposal to restore a top federal rate of 39.6 percent, the net effective rate in New York under the new budget law would exceed 10 percent, compared to a peak of 8.8 percent before 2018.

The post-deductibility level of New York’s top rate across the last 55 years is illustrated below, culminating in the impact of the new state budget’s revenue bill. 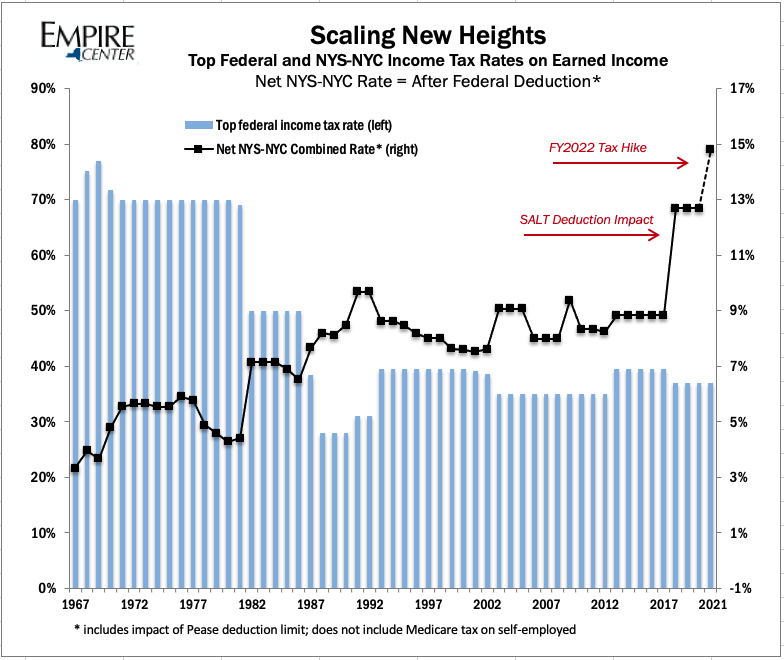 On the spending side, headline items (as summarized in the governor’s press release) have included:

As noted here yesterday, the budget also includes an unexplained, out-of-the-blue $385 million appropriation for the state’s biggest capital pork barrel fund, the State and Municipal Facilities Program, even though nearly $2 billion remains unspent and local governments whose projects are funded with SMFP money are already awash in federal stimulus cash.

However, the biggest beneficiaries aren’t workers and businesses hurt by the pandemic, or local governments, but unionized public-sector workers, including:

School aid is the largest share of state spending consuming roughly 29 percent of the last budget before the pandemic. Regardless of the supposed goal or purpose, money spent on schools invariably serves primarily to pay for hiring and paying staff, mainly teachers. The new budget will boost school aid by a record $3 billion, or nearly 12 percent, on top of which school districts serving disadvantaged students will be showered with an additional $9 billion in federal funds under the latest stimulus bill. All this money will inevitably expand the base of collectively bargained compensation—which explains why New York State United Teachers (NYSUT) and its New York City affiliate, the United Federation of Teaches (UFT), bankrolled a leading tax-the-rich lobbying organization.

But the $3.5 billion of FY 2022 revenue raisers in the new budget, projected to rise to $4.3 billion next year, is unlikely to grow enough to support the ever-expanding public school personal services expense base in future years, especially since the Legislature has embraced the goal of fully funding the $4 billion tab for an enriched “Foundation Aid formula” dating back to the Spitzer era.

Summing up the preliminary budget deal in a virtual press conference on Monday, Cuomo said: “This budget will set the trajectory for the state for the next 10 years.”