New York State is home to more than 1,600 general-purpose local governments.1 A challenging fiscal environment and notoriously high property taxes have raised structural and service issues to new levels as communities explore the potential efficiencies to be gained through shared services, dissolution and consolidation. Just as every community is different, the potential fiscal benefit of such change varies. But nearly all shared service and consolidation efforts share a common starting point: The notion that streamlining local governments and service delivery frameworks can be a helpful element in addressing fiscal stress.2

Local governments have a variety of options available to them under state law. Shared service arrangements – in which governments partner to deliver services while remaining separate entities – are common. They range from informal “handshake” agreements to cooperate, to more formal, contractual approaches to consolidate specific functions. Larger-scale restructuring options include dissolution and consolidation. A 2009 change in state law ups the ante, lowering the procedural bar for moving restructuring efforts forward.

The current economic and fiscal environment has placed a premium on efficiency and cost-effectiveness. To help inform communities’ response, this paper reviews the basic options available to New York’s local governments; documents the implementation path for each; and offers “best practice” recommendations for managing change effectively.

The restructuring issue is hardly new to New York State. Though a recession-weakened economy, high relative property taxes and challenged revenue streams have raised the issue’s prominence, the state is actually home to one of the nation’s first significant consolidations. New York City’s boroughs merged in the 1890s, in what was at the time the nation’s 6th city-county merger. The modern City of New York spans five boroughs, thousands of unique neighborhoods and more than 8.3 million people, delivering services through a unified municipal framework.

More than a century later, local governments statewide are looking critically at shared services and restructuring.

Local governments in New York have wide latitude to deliver shared services. State law permits municipal corporations to provide in cooperative fashion any function that they are empowered to provide on their own. Article 5-G of the state’s General Municipal Law authorizes the “performance of municipal cooperative activities”:

“In addition to any other general or special powers vested in municipal corporations and districts for the performance of their respective functions, powers or duties on an individual, cooperative, joint or contract basis, municipal corporations and districts shall have power to enter into, amend, cancel and terminate agreements for the performance among themselves or one for the other of their respective functions, powers and duties on a cooperative or contract basis or for the provision of a joint service…”3

Local governments can often realize cost savings and/or operational efficiencies through shared service arrangements short of full restructuring. Moreover, the approval and implementation is generally easier for shared services than for full consolidations.

Existing resources include the Office of the State Comptroller’s Shared Services in Local Government,4 a primer on getting started, and the Department of State’s local government management guides,5 which offer practical suggestions and case studies on intermunicipal cooperation. The next paper in this series will focus on this topic exclusively, including an examination of local governments already sharing services.

*While cities could incorporate an entire adjacent municipality into their own borders, they may not be consolidated

Both processes are discussed in detail below. The Department of State’s New N.Y. Government Reorganization and Citizen Empowerment Act: A Summary of the Process for Consolidation and Dissolution is an indispensable guide for any resident or municipal official seeking additional information.6

Governed by Article 17-A of the General Municipal Law, dissolution involves “the termination of the existence of a local government entity.” In practice the option has applied primarily to villages, however, it is also available to other special districts created by law. 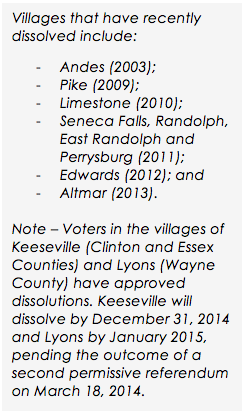 Since 1921, 47 village governments have dissolved. Ten of those have occurred in the past five years alone, a 30 percent approval rate on the 33 dissolution referenda held since 2008. Among them was Seneca Falls, the largest village dissolution in state history, which dissolved into the surrounding Town of Seneca Falls in 2012.

Two dissolution processes are available. Under a board-initiated dissolution, the village board passes a resolution endorsing a dissolution plan specifying elements including fiscal estimates of the dissolution and formal processes for transferring or eliminating village employees, disposing of village

assets, and handling existing liabilities and indebtedness. The plan, typically developed through detailed study and analysis, is subject to public referendum of village voters.

The second, voter-initiated dissolution, allows a dissolution process to commence upon filing of a petition containing 10 percent of the voters in the village (or 5,000 signatures, whichever is less), even without action of the village board. In villages of less than 500 voters, signatures of 20 percent of voters are required.

Distinct from the board-initiated process, the voter-initiated procedure requires an initial public referendum prior to development of a dissolution plan. In the event the referendum passes, the village is required to draft a formal plan that contains all the same elements as cited in the board-initiated section above. Once drafted, that plan can either a) automatically take effect upon approval of the village board, or b) be brought up via petition for a permissive referendum. To be subject to permissive referendum, a certified petition (with signatures of at least 25 percent of voters or 15,000 signatures, whichever is less) must be filed within 45 days of approval by the governing body. 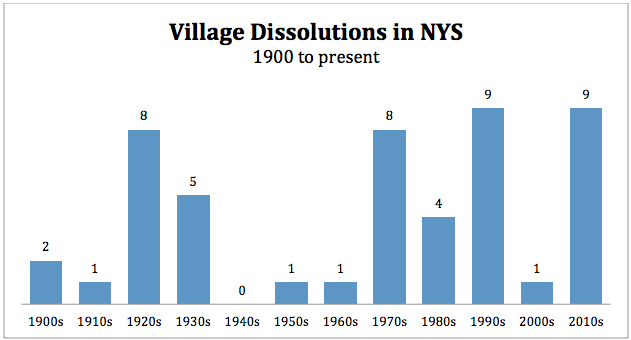 Rejection of dissolution by voters results in a four-year moratorium on either board- initiated or voter-initiated dissolution efforts, to prevent a “perpetual dissolution” effort from disrupting governments.

Regardless of the process used, only village voters cast ballots in a village dissolution referendum. Notwithstanding that eliminating a village often creates fiscal implications for the surrounding town, town-outside-village voters do not cast votes on the decision.

Consolidation involves two or more governments and can be achieved one of two ways: one government “absorbs” another or multiple governments are eliminated and a new successor government is created to cover all of the predecessor municipalities. 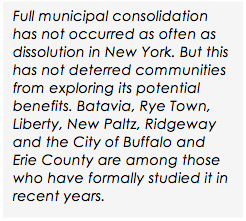 The plan is subject to approval by the governing boards, public hearings and simultaneous referenda in each community. Affirmative votes in each community are required in order to achieve consolidation; failure to approve in one or more of the entities results in no change to current structures. Similar to dissolution votes, rejection results in a four-year moratorium on consolidation efforts.

Under the New NY Government Reorganization and Citizen Empowerment Act, the process for a voter-initiated consolidation mirrors that of a voter-initiated dissolution. It enables a consolidation effort to commence upon filing of petitions containing 10 percent of the voters (or 5,000 signatures, whichever is less) in each affected municipality. In municipalities of less than 500 voters, signatures of 20 percent of voters are required. 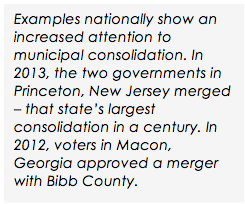 Like the voter-initiated dissolution process, this pathway requires an initial public referendum prior to development of a consolidation plan. In the event the referendum passes, the governing bodies are statutorily required to draft a formal plan that contains all the same elements as cited in the board- initiated consolidation process. Once drafted, that plan can either a) automatically take effect upon approval of the governing bodies, or b) be brought up via petition for a permissive referendum.

Unlike village dissolution – which can be implemented unilaterally and permits only residents of the affected village to vote on passage – consolidation requires joint participation by each affected municipality and its voters.

When it comes to service optimization, shared services or restructuring, there is no “right” strategy that applies to every community. Municipal change of whatever form is an inherently public process that requires the right procedural infrastructure, community engagement and objective analysis.

In 2009, Princeton Township and Princeton Borough, New Jersey began to again consider the prospects of joining their two governments after previously unsuccessful attempts. A table on pages 6-7 of this report presents the aforementioned approach in the context of Princeton’s recent municipal consolidation, which CGR and GovWorks staffed.

Following a 2011 referendum, the merger took effect in January 2013 and resulted in more than $1 million in first-year savings and a municipal tax reduction. Recurring savings at full implementation are projected to exceed $3 million annually.

As economic and fiscal conditions have tightened in recent years, local governments statewide have increasingly explored consolidation and service reengineering as pathways to a stronger bottom line. A variety of options exist – from shared services on the one hand, to more formal restructurings such as dissolution or consolidation on the other. There is no “one size fits all” approach that makes sense for all municipalities. The answer for – and impact on – each community is different. Through a sincere consideration of the statutory alternatives available to local governments, and effective “infrastructure” to manage any change effort, communities can realize benefits that yield more sustainable and affordable services.

Governor Cuomo has further spotlighted this issue in his FY 2015 Executive Budget proposal to link a temporary state-subsidized “Freeze” of local property taxes to a locality’s willingness to take “concrete steps to reduce their costs through shared services and or consolidation.”7

[This paper is a joint product of the Empire Center for Public Policy in Albany, NY; the Center for Governmental Research in Rochester, NY; and GovWorks Consulting in Princeton, NJ.]

1. As defined by the New York State Commission on Local Government Efficiency and Competitiveness, general purpose local governments include; counties, cities, towns and villages. Access the Commission’s report at http://www.nyslocalgov.org/pdf/Local_Government_Count.pdf.↩

2. Although this paper focuses options for local governments, similar approaches are also available to school districts, and they are increasingly exploring them. In the past two years, the New York State Department of State has awarded reorganization study grants to a number of district pairs, including Mayfield & Northville, Wells & Lake Pleasant, Pavilion & Wyoming, Stockbridge Valley & Madison, and Hamilton & Morrisville-Eaton. Access the State Education Department’s comprehensive Guide to the Reorganization of School Districts in New York State at http://www.p12.nysed.gov/mgtserv/sch_dist_org/GuideToReorganizationOfSchoolDistricts.htm.↩